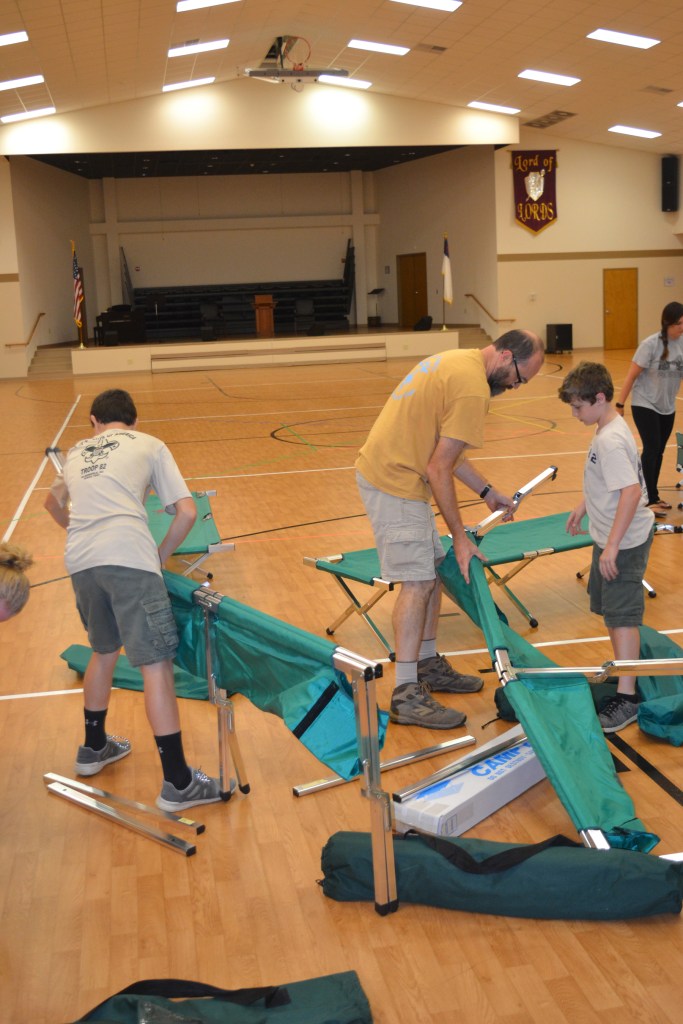 Jeff Parsons, center, and sons, Benjamin, left, and Samuel, of Boy Scouts Troop 82, ready cots inside the gym at Anderson Grove Baptist Church. The church, along with Locust Elementary School, is serving as an emergency shelter for those seeking refuge from Hurricane Florence.

As wind and gusts from the outer bands of Hurricane Florence swirled in Stanly County Friday, organizers were busy ramping up additional safety precautions.

Five people have already died as a result of Florence. According to authorities, a mother and her infant daughter were killed in Wilmington when a tree fell on their house. Two Lenoir County men were killed in separate incidents. A 77-year-old man was electrocuted when he connected extension cords to a generator in the rain. Wind caused a 78-year-old man to fall and fatally hit his head. A Pender County woman died from an apparent heart attack as rescuers were trying to clear debris to reach her.

“Our hearts go out to the families of those who died in this storm,” Gov. Roy Cooper said. “Hurricane Florence is going to continue its violent grind across our state for days. Be extremely careful and stay alert.”

Two emergency shelters — one at Anderson Grove Baptist Church, 2225 E. Main St., Albemarle, and another at the gymnasium at Locust Elementary School, 103 School Road, Locust — were scheduled to open at 5 p.m. Friday for those seeking refuge. Plans call for the facilities to open for anyone needing a safe place to ride out the storm, according to County Manager Andy Lucas.

“These shelters are pretty basic, not like people’s homes,” Lucas said. “But they are there to provide a safe place for the next 36 to 48 hours.”

Florence began pounding the North Carolina coastline Thursday, with the hurricane’s eye coming ashore in Wilmington around 8 a.m. Friday. Heavy rainfall, storm surge and wind seized the coast with Florence stalling at the coastline. Florence was eventually downgraded to a tropical storm.

Cooper has been continuously urging North Carolinians to be vigilant with safety preparations.

“Surviving this storm will be a test of endurance, teamwork, common sense and patience,” Cooper said Thursday. “Thank you to those who evacuated and prepared. To anyone still unwilling to take this seriously, let me be clear: you need to get yourself to a safe place now and stay there.”

Also Thursday, Cooper requested a presidential disaster declaration to expedite the process of receiving federal aid for cleanup and recovery.

President Donald Trump responded by mobilizing a massive federal response. More than 3,800 federal employees, including more than 1,000 from the Federal Emergency Management Agency (FEMA), are working with state and local partners to respond to the storm.

Thousands across the state have already lost electricity, with much more expected as Florence encroaches.

Although the hurricane has been reduced to category 1, its stall and massive size pose a threat of long durations of rain and wind. Mostly, Florence figures to be a huge rainmaker with extensive flooding.

The Hurricane Center is predicting “catastrophic” flooding in the Carolinas.

Forecasters project Florence to turn toward South Carolina before lumbering across the border of the Carolinas. As of early Friday afternoon, however, Florence had not turned as much as forecasted which could put Stanly more in the storm’s crosshairs as originally forecast. Regardless of Florence’s trek, Stanly is likely to experience high wind and rain throughout the weekend.

The bulk of the rain is expected to hit the immediate area on Saturday and Sunday. Florence’s slow pace could stretch the storm’s effects into early next week. In fact, many closings and cancellations have been extended to include Monday.

Sheriff George T. Burris issued a statement via social media urging residents to stay inside and off the roadways.

“Please stay indoors and off the roads to avoid flood areas, downed trees and high winds,” Burris posted. “Have plenty of water, food, batteries, candles and flashlights in case of power outages.”

The city of Albemarle and the town of Norwood have declared a state of emergency for each municipality.

Albemarle issued an advisory to its citizens, warning residents to stay inside amid concerns for flooding.

“Flooding is expected to be a problem in low lying areas due to continuous, heavy rain,” the advisory stated. “If we experience power outages, electric crews will begin repairs as soon as dangerous conditions abate. They will respond first to the repair of main lines so electricity will flow to more areas. We have extra crews on standby to ensure power is restored safely and quickly.”

During after hours and weekends, city residents are urged to call 704-984-9679 to report power outages.

Division 10 of the N.C. Department of Transportation is prepared to respond to road obstructions caused by the storm. A staff of 114 with access to 94 chainsaws, 12 front-loaders, two bulldozers, 15 backhoes, 16 motor graders, 188 barricades and 116 road-closed and 204 high-water signs is prepared to respond.

Additional closings across the county include:

• On-campus classes at Pfeiffer University are closed through Monday. Operational updates for Tuesday will be announced Monday evening.

• Stanly Community College will make an announcement Sunday afternoon regarding classes for Monday.

• Saturday’s Party in the Park in Richfield has been canceled.

• All parks in the city of Albemarle are closed until after the threat of the hurricane has concluded. Park facilities will reopen once damage has been assessed and are safe to open.

• The Stanly County Farmers Market scheduled for Saturday has been canceled.

• The Fork in Norwood will be closed Friday through Sunday.

• The concert featuring the music of John Denver scheduled for Sunday has been postponed until Sept. 30.