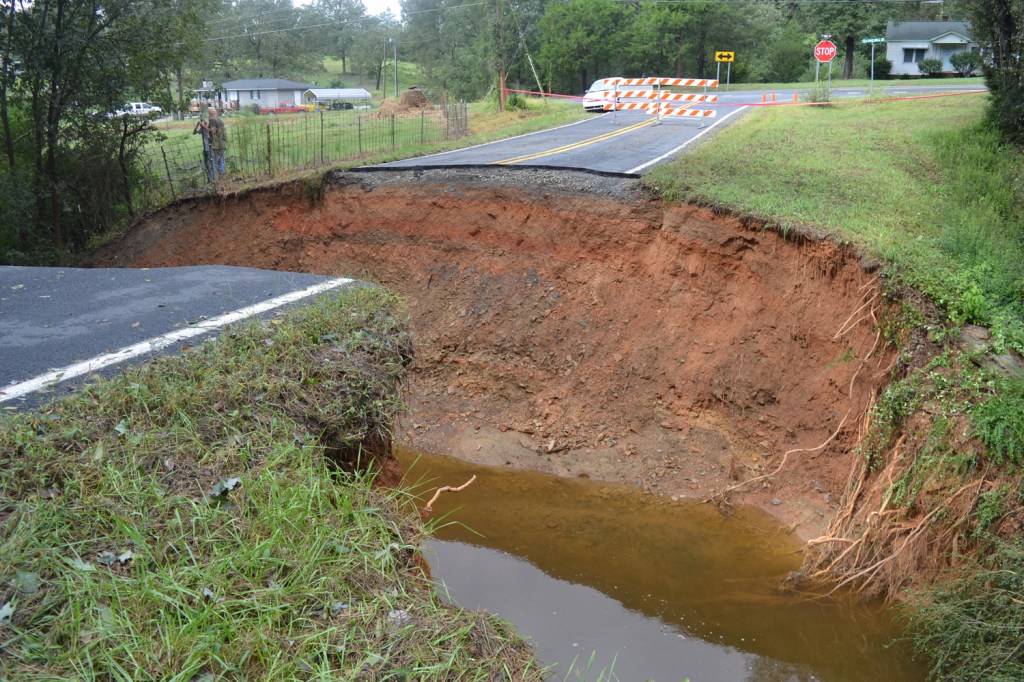 Flooding from Florence caused Rock Hill Road to collapse near where it meets Love Mill Road. The asphalt and a culvert washed away in the swollen creek, leaving a drop of about 15 feet. Crews closed the road for safety.

Everything was supposed to return to normal on Monday, but because Florence saved most of its fury for the end county residents and businesses instead spent Monday cleaning up from the storm’s wrath.

Like a punch in the gut, Florence dumped most of its rain in Stanly on Sunday, with much of the day experiencing a deluge for several hours straight.

Although Hurricane Florence had been downgraded to a tropical storm by the time it invaded Stanly County, the rainmaker finally delivered. Some areas in the county seemingly experienced more of a soaking than others.

“I don’t know if we had historical rainfall, but we had epic rainfall,” said Brian Simpson, director of Stanly County Emergency Services.

By in large, Stanly seemed to dodge most of Florence’s punishment with surrounding counties, specifically those to the east, faring worse.

According to a spokeswoman with the National Weather Service, Florence dumped an estimated 5-8 inches of rain on Stanly. Those numbers, however, are not official. Rain totals climbed farther east of Stanly. Places like Troy, Wadesboro and Asheboro were drenched with 8-10 inches of rain. The cities of Carthage, Sanford and Laurinburg got 10-15 inches of rain. Totals reached 20 inches along the I-95 corridor.

So far 18 counties in North Carolina have been identified under the major federal disaster declaration.

Areas that typically flood in Stanly did so. Only this storm caused flooding in areas that seldom, if ever, flood. Numerous roads were underwater, which led to closures.

Flooded roads were receding by Monday. Others near rivers yet to crest, however, still posed a threat. U.S. Highway 52 south of Norwood near Rocky River was among those roadways still dealing with water on Monday.

Gov. Roy Cooper issued a warning about the dangers of Florence’s aftermath.

“For many parts of North Carolina, the danger is still immediate. Flood waters are rising as rivers crest and will for days,” Cooper said. “I urge you, if you don’t have to drive, stay off the roads, particularly south of U.S. 64. And don’t drive around barricades on roads.”

At least 17 people died due to Florence, including two in neighboring Union County.

First responders from Stanly County helped Union with the search and recovery of a fatal flood victim in Marshville. 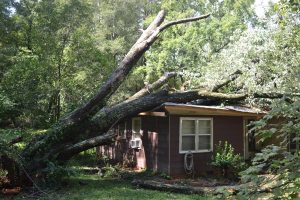 The effects of Florence caused this tree to uproot and fall across a house on South Slack Street in Albemarle on Sunday afternoon.

Downed trees, including some that landed on houses, wreaked havoc for residents. Fallen trees and limbs on power lines contributed to sporadic outages.

A section of Rock Hole Road, northeast of Stanfield near Love Mill Road, collapsed with asphalt and culverts washing downstream of a swollen creek. Water devoured a 20-foot section of pavement, leaving a cliff-like gap of about 15 feet deep.

“It became a challenge because we had so many inundated areas,” he said.

Stanly County was under a curfew from 9 p.m. Sunday to 6 a.m. Monday.

A federal team of 14 from Virginia was deployed to assist Stanly County’s emergency services with storm-related responses. It was manned out of the Albemarle Fire Department.

Numerous volunteers throughout the county helped man two emergency shelters. One was set up at the gym of Anderson Grove Baptist Church in Albemarle and another at Locust Elementary School.

“The county has really come together,” said Sabrina Beasley-Cline, director of the local chapter of American Red Cross.

“It takes an event in our own backyard before you know it’s real,” she added.

About 20 residents sought refuge at the Anderson Grove shelter, compared to 17 in Locust. Most of those sheltered were afraid of what the storm might do. Others were displaced from the storm, according to Dave Jenkins, director of Health and Human Services for Stanly County.

“A lot of people stepped up and helped out,” Jenkins said.

He, too, recognized the county was spared the devastation experienced in neighboring counties.

“Stanly County was fortunate, compared to a lot of other counties,” Jenkins added.