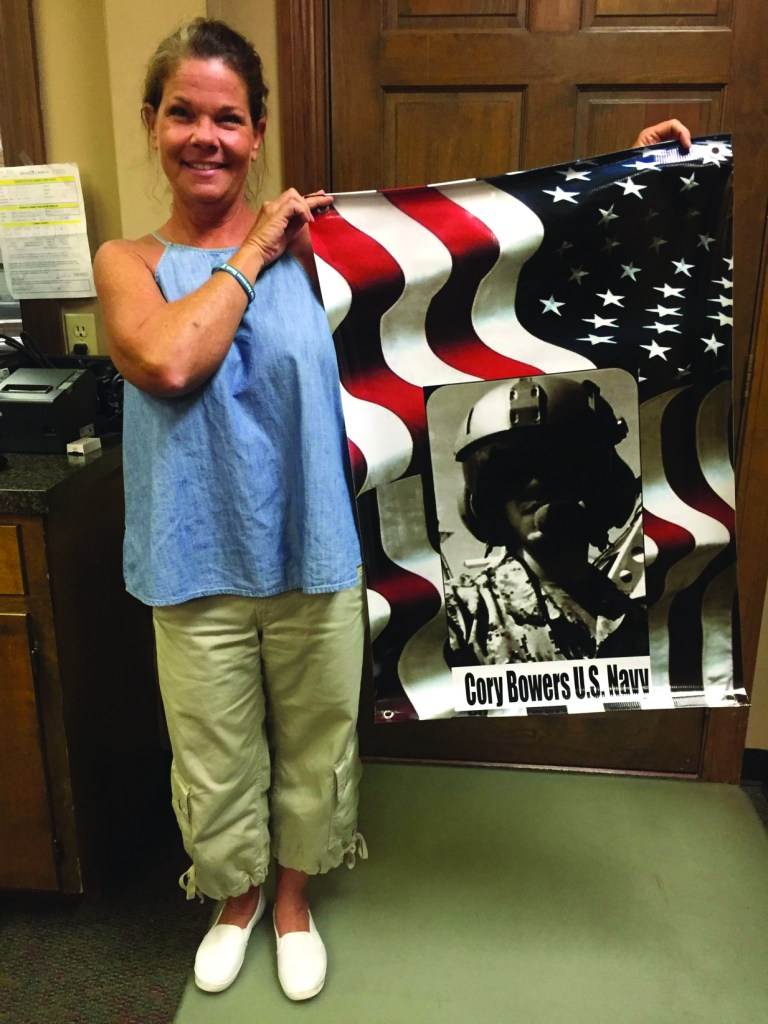 Photo by JESSE DEAL Oakboro resident Rene Poplin holds a sample of the military tribute banners that will be hung starting next May.

The Oakboro Town Council approved the implementation of a military tribute banner program at its meeting Monday night.

Though it has been done elsewhere across the country, the project would be the first of its kind in North Carolina. For a $100 fee made to Locust’s VFW Post 6365, a local resident can recognize an active, veteran or fallen military member with a banner in downtown Oakboro.

“They can submit a picture along with some information about them. In turn, there is a banner that is produced,” said Rene Poplin, an Oakboro resident who is leading the project.

She has a son who is in the Marine Corps, in addition to a grandfather, father and uncle who also served in the military.

With the assistance of Oakboro Fire Department, the double-sided banners will be bracketed and zip tied on utility poles and light posts across the town. An American flag will reside on posts in between each military banner.

“We have decided to allot a certain number per year, every year from May to September,” Poplin said. “Then the banners will come down and be presented to the families. It is something the families have to keep as a remembrance.”

Poplin is designing a website for the program so residents can gather more information about the program. In addition, the website will have a printable version of the application that is used for the banner creation process.

She hopes to have the program ready for application submissions by November.

The tribute project wasn’t the only motion approved by the Oakboro Board of Commissioners Monday.

It also agreed to install security cameras on the front and back of Oakboro Town Hall and the Police Department building.

“We’ve had some vandalism here in town and we are a little bit shy of what we think we need in coverage here at the town hall,” Mayor Pro tem Mike Efird said.

The council unanimously voted to have the cameras installed to help deter acts of vandalism going forward.

Before a closed session of the meeting began, Police Chief T.J. Smith took a moment to publicly thank his department and volunteers for assisting the town throughout the duration of Hurricane Florence’s wrath.

“This weekend, Oakboro weathered the storm,” Smith said. “We had very minimal damage, and our guys all volunteered to come in with their chainsaws to help. It was a big deal for the county as a whole as they all worked together, so I’m very proud of our county.”