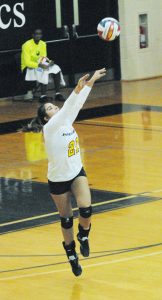 Lili Jaramillo gets one of her 11 digs in the win Tuesday. (Photo by Charles Curcio)

The Falcons were efficient both offensively and defensively on the night, managing 38 kills and a .253 hitting percentage. Pfeiffer also had nine aces in the win.

Freshman teammate Angelina Fardella (Harrisburg, N.C.) dished out 23 assists and had 10 digs for the Falcons.  Lili Jaramillo (Oakboro, N.C.) also had a great effort defensively, finishing with a team-best 11 digs.

Pfeiffer never trailed in any of the three sets, opening each set with a long run. The Falcons led 6-3 early in the first set, 6-2 in set two and opened the final set scoring six of the first seven points .

The win improves the Falcons to 4-5 on the season while Hollins drops to 5-4.

Pfeiffer will return to the court this upcoming weekend, traveling to Raleigh, for a USA South tri-match on Saturday, Sept. 22.  The Falcons will take on host Meredith at noon and will then face Greensboro at 2:00 p.m. 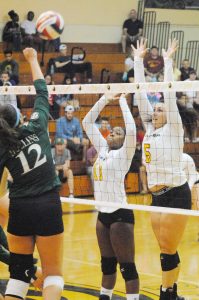