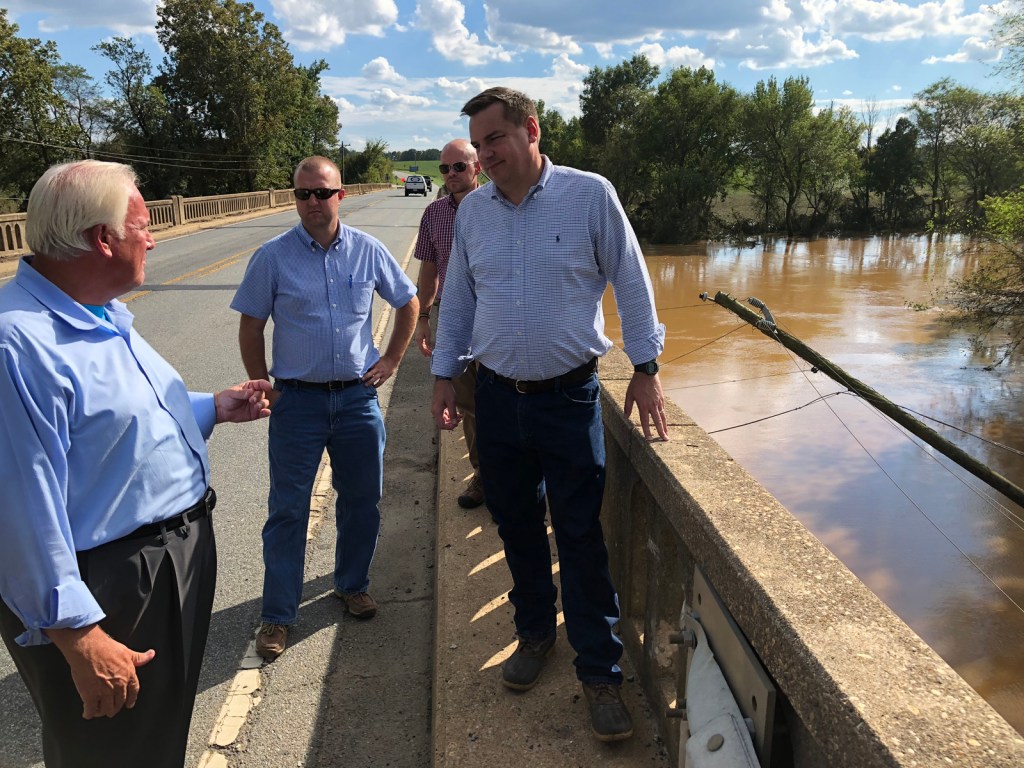 As the state’s death toll from Florence climbed to 27 on Wednesday, residents in waterlogged Stanly County pushed forward.

Although parts of the county remained under a flood warning due to receding waters filling area rivers, most organizations resumed business as usual Wednesday. Three days after Florence departed Stanly, but not before bringing deluge, the county has warmed with sunny skies and sticky humidity.

Stanly County Schools returned to class after a break of three and one half days due to Florence. The return, however, was not without the maneuvering of bus routes so drivers could avoid roads and bridges still deemed too dangerous.

SCS coordinated with the N.C. Department of Transportation regarding road closures and safety threats. As of Wednesday there were 14 closures per DOT, which affected 20 percent of the district’s bus routes, said Michael Lambert, transportation director for SCS.

“Transportation staff and school principals along with our bus drivers worked closely together to develop revised bus routes so school could be open on Wednesday,” Lambert said. “Our drivers know the roads on their routes and did an outstanding job helping develop the revised routes and making sure their riders were picked up and delivered to school safely and in a timely manner.”

Overall, SCS fared well during the storm. There were power outages, including the loss of food at Endy. Badin sustained minimal flooding in the hallways. There were several roof leaks, but nothing major. Leaks caused the replacement of ceiling tile, according to Superintendent Jeff James.

Most of the lingering power outages were in the eastern part of the county.

“The rising water caused the utility poles across the Rocky River at Riverview Road and U.S. Highway 52 to collapse on the western portion of the bridge and alongside the Norwood kayak and canoe launch,” said John Mullis, town administrator for Norwood. “This utility feeds from Anson County and supplies electrical power to portions of Piney Point just outside Norwood’s municipal limits.

“Unfortunately, Duke Energy was unable to access the property because this area was still submerged until early this morning (Wednesday),” he added.

Flood waters in eastern Stanly were among the last to recede. U.S. Rep. Richard Hudson toured his 8th District Tuesday which includes Stanly. In addition to surveying the flood-ravaged banks of the Rocky River, Hudson visited with the county’s emergency services that stayed busy during the storm.

“I met with Stanly County emergency management and other local leaders to survey impacted parts of our community,” Hudson said. “While the storm may be behind us, a lot of folks in Stanly County were impacted and there was immense flooding — especially below Lake Tillery where the Pee Dee and Rocky rivers meet. I will continue to work with state and local officials to ensure we have what we need to rebuild.”

Florence, which began as a hurricane before it was downgraded to a tropical storm, is blamed for 37 casualties across three states. At more than 8 trillion gallons, or 35 inches, Florence dumped the most rainfall of any previous storm in the state’s history, according to the National Weather Service.

Like Floyd, Florence wreaked the most havoc on the state’s eastern counties and its many rural farming communities.

The N.C. Department of Agriculture reported 3.4 million chickens and turkeys and 5,500 hogs drowned as result of Florence. The animal deaths doubled those lost in Hurricane Matthew, but only a quarter to the deaths from Floyd.

Contamination from the animal farms, such as hog lagoons, along with raw sewage and coal ash pose new health threats to drinking water for those East.

Agents with the N.C. Cooperative Extension are still processing damages to Stanly’s farms and crops.

Areas most affected by flood waters are the various parks throughout the county. Since most lie near waterways or in low lying areas, the majority of the municipal parks sustained damages. Trails and kayak launches were flooded from Florence’s 3-day rain event.

Morrow Mountain State Park remained closed Wednesday as cleanup continues. Plans call for it to reopen Thursday, but officials are urging visitors to check the park’s website ( https://www.ncparks.gov/morrow-mountain-state-park ) for updates.

Duke Energy and the N.C. Wildlife Resources Commission issued an advisory Wednesday warning boaters on the Yadkin-Pee Dee basin to exercise caution due to high water levels and floating debris. They also warned against boating at night.