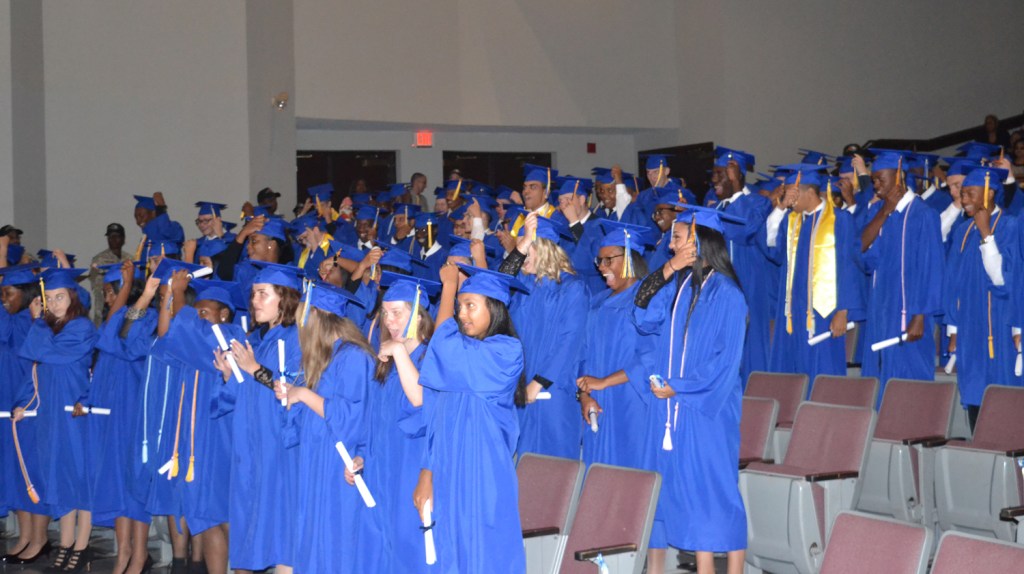 Graduates of Class 50 of the Tarheel ChalleNGe Academy turn their tassels at Thursday's commencement at the Agri-Civic Center. This marks the New London's facility sixth graduating and largest class.

Class 50 of the Tarheel ChalleNGe Academy marks the sixth graduating class at the New London facility.

At 112 cadets, TCA graduated its largest class yet Thursday; however, several graduates and their respective families did not make it back for the graduation at the Stanly County Agri-Civic Center because of the devastation caused by Hurricane Florence.

Those present refused to let the effects of Florence further dampen their accomplishments as they course life’s next step. The majority of the graduates reportedly plan to pursue the workforce, followed by others opting to continue their education among the state’s community colleges, including Stanly Community College.

A few indicated enlisting in the military as their next chapter.

“It (TCA) has changed where I am going,” Ratke said of the program’s influence on his life and decision to attend The Citadel.

During Ratke’s “Cadet Response,” he shared a poignant tale of what his life was like before TCA.

“You have to know that I was bullied in middle school for reading books. Books!” Ratke said.

He continued by reminding cadets to stay focused on their goals and rely on the skills learned. It starts with learning “who you are” and “where are you going,” Ratke added. 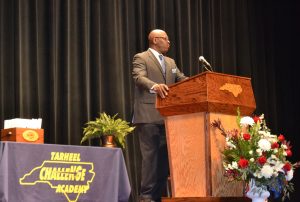 Timmons’ pinch hit did not disappoint. He told the cadets about his own challenge as a 15-year-old black teenager in 1975, when his father died suddenly.

Instead of becoming another statistic of a wayward teen growing up with a single parent, he found direction through discipline and responsibility.

“I had a praying grandmother and a mother. I had a community and a church,” Timmons said.

“No one cares about excuses and feelings — just results,” the retired soldier added.

Timmons urged the graduates to develop goals with a plan. Then execute the plan.

He told them to have the courage to follow their heart and intuitions.

“It doesn’t matter if your dream comes true if you spent your life sleeping,” Timmons said.

This graduation brings the number of TCA graduates to 5,289.

Originally scheduled for Monday, Florence pushed the graduation ceremony back a few days. Since TCA cadets hail from all of the state’s 100 counties, those from the storm-ravaged counties in eastern North Carolina were unable to make the return trip to Stanly County.

North Carolina’s Tarheel ChalleNGe Academy is a quasi-military program for high school dropouts, or expellees who, if left unguided, could be headed for trouble. The 22-week program concentrates on providing the young adults with the discipline and life skills necessary to be productive members of society.

TCA is a volunteer program. Anyone can recommend and assist cadets. However, an applicant must volunteer for the training and be motivated and committed to turning his or her life around through this second-chance program. There is no cost to the cadet or the cadet’s family other than personal items like toiletries.

Siblings from across the pond find each other after…