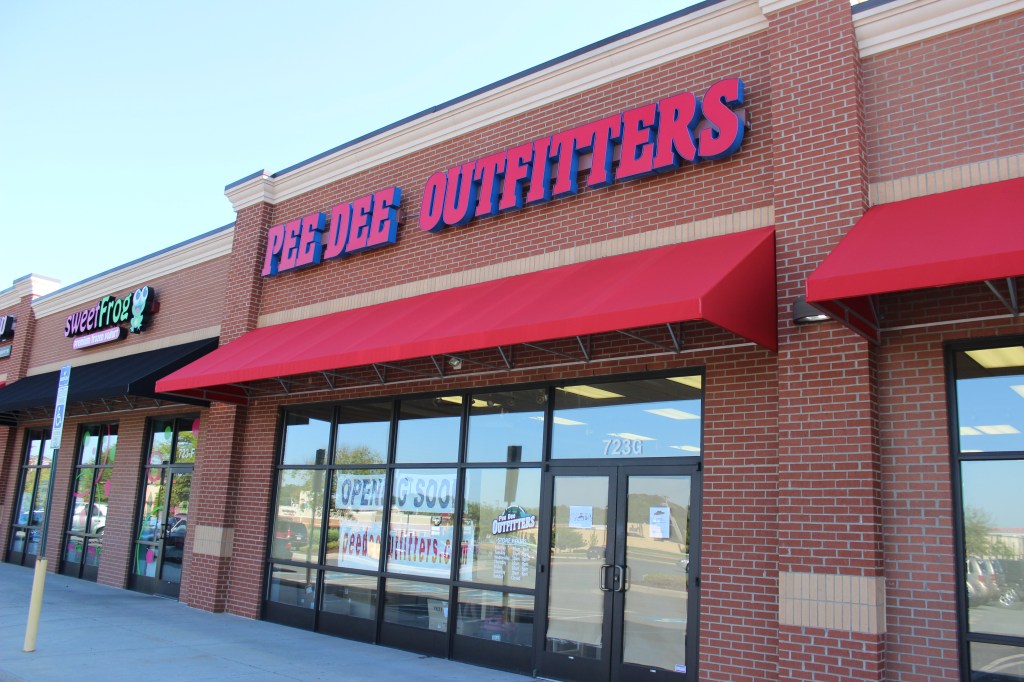 Pee Dee Outfitters' location in Albemarle opened back up April 22.

An emerging, regional retailer will expand into Albemarle this week.

PeeDee Outfitters — which already operates three stores in communities along the PeeDee River — will host its grand opening at the Wal-Mart shopping center on Thursday.

“It’s the soft goods side of an outfitter outlet,” said Jeff Faulkner, one of three owners.

Rather than kayaks or camping gear, he explained, they focus primarily on outdoor apparel and southern clothing lines.

“All those brands you can usually only get in a big city, but at a small town 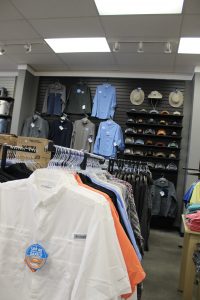 A variety of clothing and hats sit on display at the new PeeDee Outfitters store.

And that strategy seems to be working. The company — which opened its first store in 2007 in Cheraw, South Carolina — has been steadily expanding for more than 10 years.

“We started right in the middle of the recession,” said Faulkner. “So we figured we had nowhere to go but up.”

He and the other founding owner, Jeff Johnson, had just lost their jobs at a department store in Cheraw, Faulkner said. With no other viable opportunities available in the area, they were faced with the choice to either move or start a business of their own.

“Our families really wanted to stay,” Faulkner said. “So we decided to give it a go.”

After working retail in a small southern town for years, they knew the kind of comfortable, laid-back clothing brands their community loved. So they decided to focus on that. 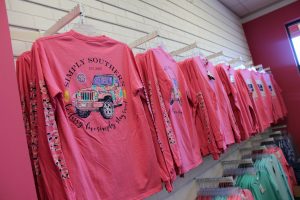 A line-up of Simply Southern merchandise.

Bringing in jackets, shoes and clothing lines from groups like Columbia, Carhartt, Patagonia, Simply Southern and True Grit, they slowly cut out a niche with both men and women in the Cheraw community.

Within six or seven years, they also began expanding beyond Cheraw. Their second store opened in Newberry, South Carolina in 2015, their third store in Rockingham in 2016.

“We’ve been looking at Albemarle for a few years, too,” Faulkner said. “It always seemed like the perfect fit, but we didn’t have a good opportunity until now.”

Their third owner, Todd Thompson, is actually from Albemarle, Faulkner explained, so after he joined, they began looking at storefronts in earnest.

“We’re very excited to get in here,” Faulkner said. “A store is only as good as its customers and we know this is a great community.” 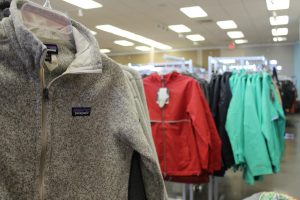 Women’s jackets lined up beside each other at PeeDee Outfitters.

In fact, while they may carry big brands, their reputation of providing a small-town atmosphere is more important to them than anything, Faulkner said.

So far that’s meant hiring local managers and employees at their Albemarle location, providing Sundays off for all associates and looking for ways to give back to local charities and organizations.

“We’ve already joined the Chamber here and are looking for more opportunities to get involved,” Faulkner said.

For more information call 704-550-9186. PeeDee Outfitters’ new Albemarle location is next to Sweet Frog in the Wal-Mart shopping center; the store’s grand opening is Thursday.