Albemarle police arrested the man suspected of stealing from the owner of The Goody Shop Cafe early Friday morning. 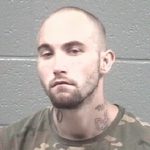 Charles Randall Miller, 27, of Cherryville, was arrested and charged with felonious breaking and entering of a motor vehicle and larceny. Police captured Miller Friday night while inside a vehicle at the intersection of N.C. Highway 24-27 and U.S. Highway 52. Miller was later identified in a lineup by Hugh Wainwright, owner of The Goody Shop, according to Capt. David Dulin.

Miller was jailed under a $50,000 secured bond and given an initial court date of Oct.1.

Around 6:30 a.m. Friday Miller allegedly took a satchel from the back of Wainwright’s car after first inquiring about a possible job. He took the bag, containing cash and a laptop, when Wainwright became distracted by a telephone call outside the rear entrance of the West Main Street restaurant, according to police.

Miller fled the scene on foot with police giving chase downtown before losing sight of the suspect.