Last year the temperatures at the Friday Night Lights XC Meet were in the low 60s. This year, the heat and humidity gave few runners any chance at a peak performance.

Eighty-five schools including South Stanly and West Stanly gathered at Ivey Redmond Park in Kernersville for this fourth edition of the event hoping to run personal records or season best times on the course that many will run again at the North Carolina state championships. 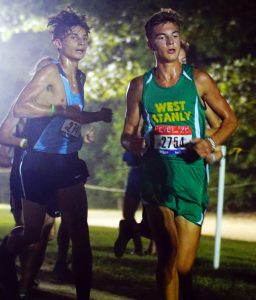 Korbin McNeill, right, powers through to finish 61st in 18:56 for the Colts. (Photo by Johnny McManus)

Thirty-nine women teams lined up for the invitational division, but due to runners dropping out or not starting only 25 of the schools received team scores. The West Stanly women continued to run well as the team placed seventh out of the 25 teams that scored.

The Colts were led by senior Pierson McManus and freshman Natalie Almond. The two Colts finished in the top 20 out of 212 finishers. Similar to the earlier meets McManus trailed the freshman for most of the race but surged ahead with about 600 meters to go. McManus sprinted to the finish in 21:19 for 14th place, passing more than 20 runners the last half of the race. Almond was behind for 16th place, posting a 21:27 time.

Senior Brooklyn Simpson stayed consistent while showing she has learned to handle the heat by running 22:46 for 45th place.

Sophomore Rachel Efird dropped 45 seconds off her time from 2017 in the Friday Night race running 24:01 for 80th. Junior Katherine Pollard (25:29) and freshman Laney McCollum (25:36) stayed in the Colts top seven.

The teams could run their top 10 in the invitational division and the Colts used senior Peyton Hill who ran a season-best 25:48. Freshman Aniston Hann set a personal record in 25:58 while Kaylee Hartsell ran a 27:46.

The men were hoping for better conditions as they started 30 minutes later than the women, but if anything, the humidity climbed higher.

Junior Korbin McNeill moved back into the team number one spot, sweating out a 18:56 for 61st place out of 317 finishers. The top three Colts found running in the first mile difficult, with more than 300 runners fighting for position over the narrow trails.

Senior Noah Almond ran stride for stride with McNeill for most of the race and was close behind in 19:09 for 79th place. Freshman James Shue was close behind the two upperclassmen, finishing 82nd in 19:12. Sophomore Austin Huneycutt continues to run in the Colts fourth spot, finishing 129th in 19:58. Junior Nathan Brown was right behind Huneycutt in 20:16.

Completing the top seven Colts were Daniel Brattain and Arturo Zelaya in identical times of 20:24, with Brattain getting the edge. Running with the top 10 Colts were Blayne Morton in a personal record 21:09, Leo Martinez (21:58) and Logan Huneycutt (22:13).