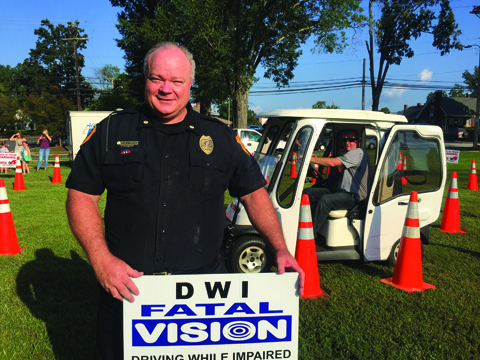 Photo by JESSE DEAL Albemarle Assistant Police Chief Jesse Huneycutt awaited visitors at Community Night Out last Saturday. He assisted with the driving while impaired simulation which showed some of the hazards of drunken driving.

With sunny weather and a large turnout, organizers deemed Community Night Out a success Saturday.

Hosted by Albemarle Police Department and Safe Kids of Stanly County, the annual event brought hundreds out to the YMCA park fields between 5-8 p.m.

“This is probably the fifth or sixth year that we’ve done this,” Assistant Police Chief J.D. Huneycutt said. “It started out as a National Night Out, but we branched out with the Community Night Out and it’s been that for the last couple years.”

Huneycutt says the purpose of the event is to allow residents and families to interact with local police officers while also enjoying vendors and games.

This year’s incarnation was highlighted by a field day theme. Participants competed in bouts of tug of war, sack races and three-legged races among other games.

“Basically, it’s an event to get out to the community. It’s all about situational awareness and learning,” Huneycutt said. “We’ve done this event typically in August and that’s when National Night Out is, so that’s the reason we had to change it to Community Night Out. We wanted to have it a little bit later in the year so it would be a little cooler.”

While temperatures were in the mid-80s, it was a change of pace from the hurricane the weekend before. The climate allowed vendors and organizers to set up a variety of entertainment for those who stopped by.

Norwood Police Department, Atrium Health and Nationwide Insurance each had booths set up for informational purposes and to award prizes through different games.

One of the biggest draws was the APD’s “DWI Fatal Vision” operation.

Huneycutt and other members of the department had a golf cart track set up in the grass surrounded by hazard cones. Participants could wear “drunk driving simulation goggles” and try their best to navigate the path without veering off the designated path.

“I think this is really good way to show people how dangerous it is to drink and get behind the wheel,” said Albemarle resident Hailey Price, who was at the event with her dog. “Safety makes all the difference.”

With an athletic field, face painting setup, DJ booth and a section of multiple inflatables spread across the YMCA park fields, there was something for everyone at the event.

“After all the chaos last weekend, this is a fun time for folks to come out and enjoy themselves,” Badin resident Todd Barrimon said. “I’m looking forward to coming back next year.”