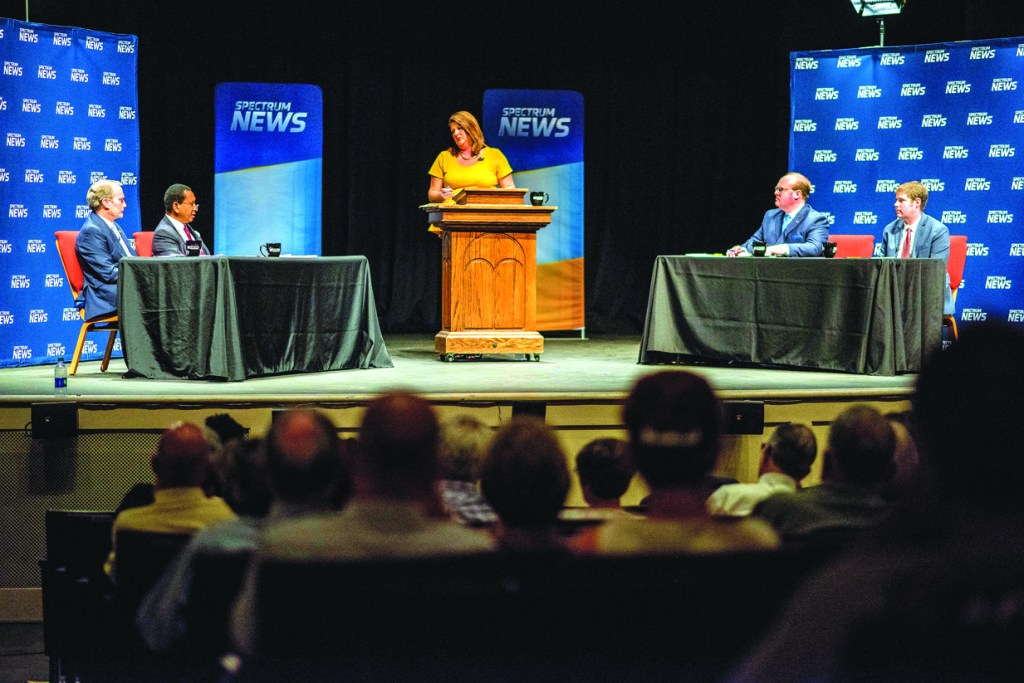 JON C. LAKEY / SALISBURY POST Loretta Boniti (center) served as the moderator for the debate. Boniti is the host of Spectrum News' "In Focus with Loretta Boniti" based in Raleigh. A special statewide debate was held in Salisbury on Tuesday evening at the Meroney Theatre co-hosted by the non-partisan organization NC Institute of Political Leadership and the Rowan County Chamber of Commerce. Senators Floyd McKissick (D) District 20 and Paul Newton (R ) District 36 joined Wayne Goodwin and Brent Woodcox to debate the proposed Constitutional amendment to change the process for filling judicial vacancies that occur between election cycles.

By Andie Foley, for the SNAP

The North Carolina Institute of Political Leadership on Tuesday hosted its first Hometown Debate, a series of four forums focusing on six proposed state constitutional amendments that will appear on the Nov. 6 ballot.

The session, held at the Meroney Theatre in Salisbury and co-hosted by the Rowan Chamber of Commerce, focused on an amendment that would change the way judicial vacancies are filled.

The governor currently fills vacancies choosing from recommendations by local bar associations. The amendment would form a nominating commission with members of the general public that would report to the General Assembly. The legislature would select at least two final candidates, and the governor would appoint one of them.

The discussions were moderated by Loretta Boniti, host of “In Focus” on Spectrum News.
Highlights from each speaker are as follows:

Speaking in defense of the proposed amendment, Newton said it would end a “good ol’ boy club” in the judiciary, giving women and minorities a greater chance to be nominated to fill vacancies.

He said members of the public would serve on the nominating commission, thereby making it a transparent process.

“It would give an opportunity for a much more diverse set of people to apply, to nominate themselves or to nominate others,” Newton said. “Nominations are much more broad when broadly received and broadly made.”

Newton said the amendment is intended to move the process of filling judicial vacancies away from meeting minimum requirements to a merit-based system.

The nominating commission would inform the Legislature of each possible nominee’s merits, he said, helping guide legislators to make a more informed decision.

McKissick said the amendment raises the potential for partisanship in the appointment process, calling the proposal an attempt by the Republican legislature to “perpetuate their power.”

“When you think about this amendment in a broader context, it’s been implemented in a way that will allow the Republican majority to get people in office they think will best serve their interests,” McKissick said.

He said North Carolina governors already have limited power and is in the bottom five states for gubernatorial power.

“If this would pass, we would become one of the weakest in America,” he said.

He said the current system works just fine to ensure diversity of candidates and the change is “absolutely unneeded and unnecessary.”

McKissick also faulted the amendment for its lack of detail about the specific authorities of the Legislature and governor in the appointment process.

“It lacks basic details which are fundamental or essential to fairness,” he said.

Woodcox also spoke in favor of the amendment, saying the current system is flawed.

“It gives all of that authority, all of that power to one person,” he said. “Governors of both parties have abused it.”

An example of this, he said, is when former Democratic Gov. Bev Perdue appointed three of her staff members to judicial seats on her last day in office.

“That’s not appropriate,” said Woodcox. “That’s not how we want good government to work.”

He said the new method would institute a system of checks and balances, rejecting the idea that it is a partisan play for power.

The legislature will not always have a Republican supermajority, he said.

“Getting more people involved in the process isn’t a power grab, unless it’s a power grab for the people,” he said.

Goodwin called the proposed amendment “pure politics,” wondering why the change was not suggested during former Republican Gov. Pat McCrory’s term of office.

He expressed concern that voters will not be aware of what they are voting for, saying the language of the amendment is “more complicated than an insurance policy.”

Goodwin also expressed concern about a provision to allow the chief justice to fill vacancies should the legislature not be in session. Judges are elected less frequently than the governor and members of the legislature.

“You cannot hold the chief justice accountable at the ballot box as quickly as one might need to,” he said.

Like McKissick, Goodwin faulted the amendment for its lack of detail, citing its call for “qualified nominees” with no description of what those qualifications would be.

“I wish that we had the enabling language that would spell that out,” he said. “This proposal doesn’t put the meat on the bones for the merit selection process.”

Spectrum News will broadcast the debate on its website, www.spectrumlocalnews.com, with an abbreviated version on its program “In Focus” at 11:30 a.m. and 8:30 p.m. Sunday.

Andie Foley is a reporter for The Salisbury Post.