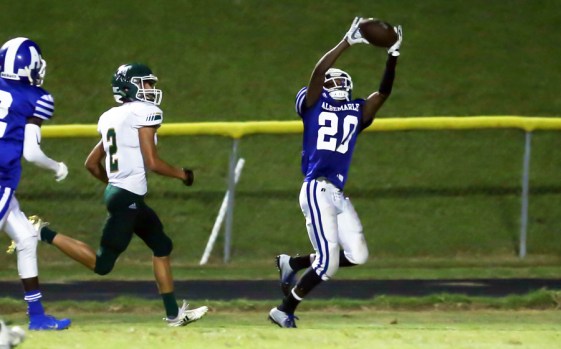 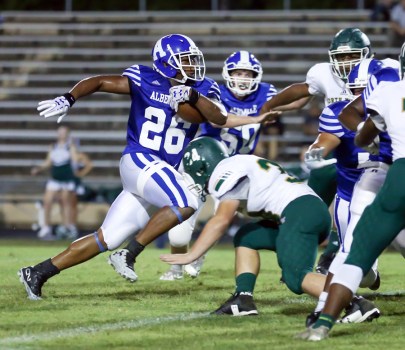 Albemarle's Elijah McCall gets to full stride carrying the football Friday night in a 34-7 win over North Moore. (Photo by Earl Bradshaw)

Story by Jesse Deal, for the SNAP

The Bulldogs got on the board at the 5:27 mark in the first quarter as McCall and Julius Smith easily helped Albemarle march down the field with tackle-breaking runs, setting up a Smith one-yard touchdown dash.

Following a Mustang three-and-out, senior quarterback Levi Nall connected with running back Christian Watkins on a 15-yard throw that laid the groundwork for another rushing touchdown by Julius Smith.

Both teams had costly fumbles in the second quarter, but North Moore’s drop was especially dangerous as it led to a 44-yard run and a one-yard score by McCall.

“He’s a load — it takes more than one person to bring him down,” second-year Albemarle head coach Richard Davis said on McCall’s rushing ability. “The kids respond to that. They see him getting runs and it brings life to the whole team. When he’s playing well, it’s going to be a good night for the Bulldogs.”

Julius Smith stepped up again — this time at the cornerback position — as he picked off Mustang quarterback Gage Pennington on the next drive. His brother Josh capped off the effort with a 32-yard touchdown pass from Nall just before halftime.

“Outside of our turnover that first drive, I was really pleased with our intensity and effort that first half,” Davis said. “In the second half, we got a little sloppy with a lot of penalties but then we settled down.”

Both teams went scoreless in the third quarter as penalties and turnovers hampered the offensive units.

That didn’t stop North Moore’s Pennington from continuing an impressive performance behind center. The junior quarterback led his team in rushing yardage by a wide margin and generated the Mustangs’ only points of the game with a one-yard run early in the fourth quarter.

With backup quarterback Manaurian Hall in the game, the Bulldogs didn’t let up on their rushing attack as McCall relentlessly recorded first downs. He notched his second touchdown — a 17-yarder — with six minutes left in the game.

Albemarle currently sits at the top of the Yadkin Valley conference tied with North Stanly (4-2, 2-0). The Bulldogs will travel to North Rowan (4-1, 1-0) on Friday night; the Cavaliers shut out South Stanly on the road Friday night, 42-0.