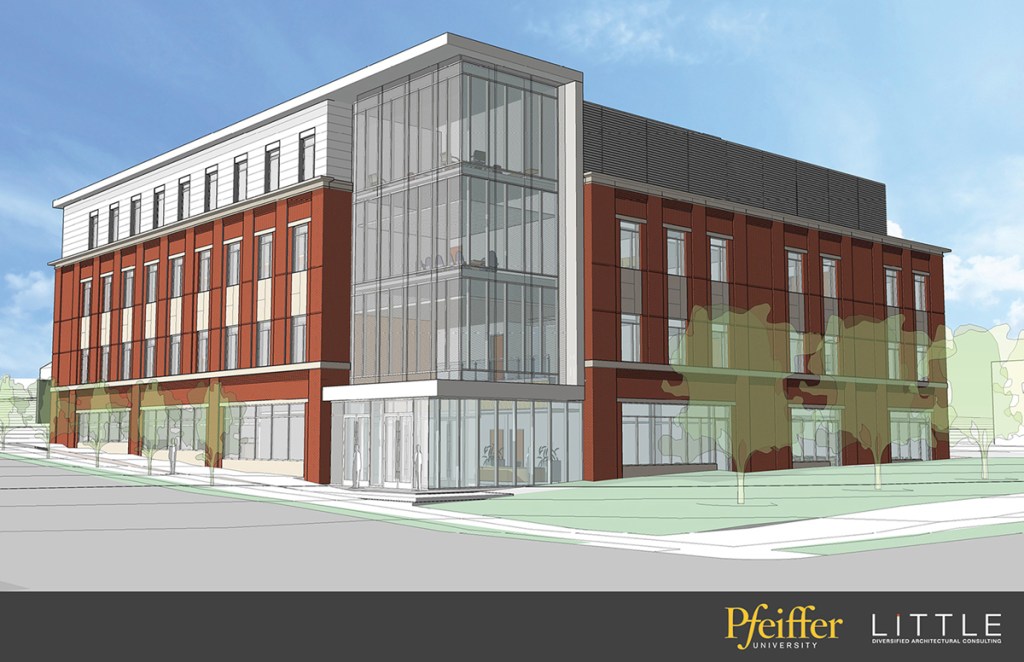 Pfeiffer University’s much-anticipated graduate campus in downtown Albemarle is finally set to get underway after the Methodist school received word its $34.5 million loan has been approved.

Pfeiffer President Colleen Perry Keith got word Wednesday night that the university’s loan with the U.S. Department of Agriculture had been approved. In the fall of 2016, Pfeiffer applied for a USDA Rural Development Community Facilities Direct Loan. Proceeds of the loan are designated for several initiatives, including the construction of the Pfeiffer University Health Science Center in downtown Albemarle. The loan is for 35 years at 3.875 percent interest.

Keith calls the USDA loan only the beginning for ensuring long-term sustainable growth at Pfeiffer University.

“Much of our day-to-day business will remain the same,” she said. “We will, however, be able to move ahead with programs and facility improvements that help our overall position: better space for teaching and learning, additional revenue, and student and employee satisfaction.”

The Pfeiffer University Health Science Center in downtown Albemarle is expected to be an economic catalyst, not just for the city but the county as well.

“The project has the potential to transform downtown Albemarle by becoming home to hundreds of full-time college students and the associated faculty and staff,” Lucas said. “As such, the project will spur additional retail development to support the student population.  Further, housing and multi-use development will also likely emerge. This development will add sales and property tax revenue for enhancements to public schools, public safety and other key services that benefit all Stanly County residents and taxpayers.”

Pfeiffer’s facility will be home to the graduate programs of physician assistant studies and occupational therapy. Once construction is complete, the facility will provide an additional resource for affordable health care in the area.

Officials say development of the Health Science Center is a critical component of the revitalization of downtown Albemarle. Since Pfeiffer announced its plans to establish a downtown campus, there has been an uptick in both development and interest.

Albemarle leaders have been in lockstep with Pfeiffer since the inception of bringing a campus downtown. The city has helped by securing properties to ensure the site has amble parking.

“The city of Albemarle is extremely excited to have Pfeiffer’s Health Science Center come to downtown and what it will do for our city,” Albemarle Mayor Ronnie Michael said.

A number of developers have already seized the opportunity to acquire properties. For example, a developer has purchased the defunct Albemarle Hotel with plans to rehabilitate and convert the structure into apartments.

Mark Donham, economic director for the city of Albemarle, said the addition of Pfeiffer’s downtown campus will yield a $136 million impact over a 10-year period.

Because of the arrival of Pfeiffer, owners of dormant buildings or those in disrepair will be motivated to renovate for lease and sale, Donham said.

“People will be able to fix something up and then get the compensation for it,” he added, referring to the increased likelihood property owners will be more apt to find tenants at higher lease rates.

Since 2015, the local economy has been making significant strides, especially with the introduction of new retail and restaurants. Consumer confidence continues to rise, too.

“People tend to spend more money with the anticipation they’ll have more money in the future,” Donham said.

Pfeiffer University’s main campus in Misenheimer will also benefit significantly from the loan. Part of Pfeiffer’s commitment to providing top-tier healthcare education, plans include renovations to the Harris Science Building. These renovations will allow for the expansion of the Bachelor of Science in nursing program. The reconfiguration of classroom space will accommodate an additional 10 nursing students.

Other planned renovations include Goode Hall, which closed in 2010 due to the accumulation of deferred maintenance. With the reopening of Goode Hall, academic support services such as tutoring and career services can be moved to a single location improving student services. Renovations to classrooms and the art gallery in Goode Hall will provide additional academic and multi-use space.

There are also plans to add elevators to Goode Hall and the Administration building.

Not only will the loan proceeds fund much-needed renovations and construction, but it will allow Pfeiffer University to consolidate and pay off existing debt incurred by previous renovations, officials said.

Construction of the Health Science Center is expected to begin in December. It’s not expected to be operational until May 2020.  Meanwhile, the other main-campus projects will start in the spring, according to university officials.