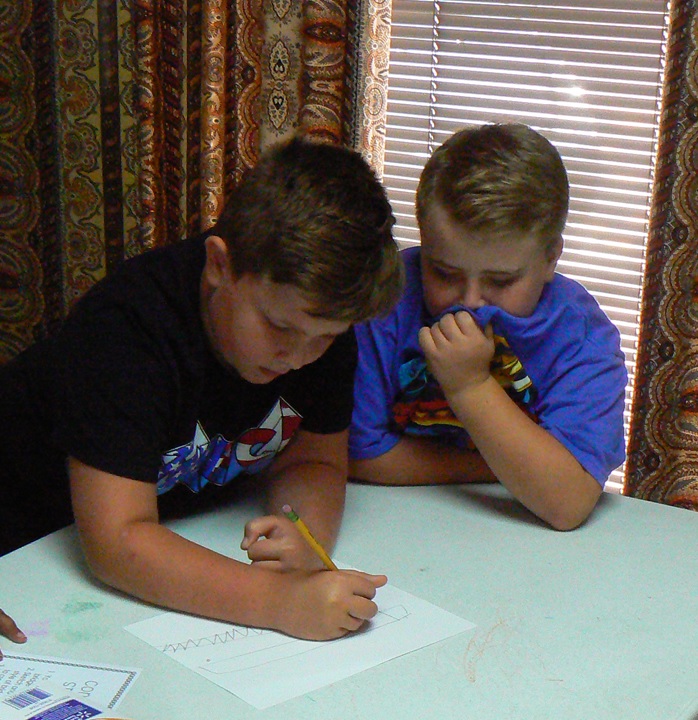 Photo by SHEILA SIMPSON Jeremiah Tucker begins to sketch the design for his team’s bridge as Casey Poma looks on.

By Shelia Simpson, for the SNAP

The Stanly County History Center hosted its first STEM program of the new school year on Sept. 8 with 15 children in attendance.

STEM programs are designed to develop a set of thinking, reasoning, teamwork, investigative and creative skills children can use in all areas of their lives, regardless of their eventual career paths.

The museum’s program is offered free to all children in kindergarten through fifth grade. Its purpose is to teach children local history by engaging them in interactive experiences.

After welcoming the children and their parents, center director Megan Sullivan began talking briefly to the children about Lake Tillery and how it was formed from damming the Pee Dee River.

As she told the story, she showed the children a picture of the completed dam and explained the problem posed by a bridge that would be covered by water once the dam was completed.

The children listened as Sullivan explained that engineers realized the bridge could not remain intact. She then showed excerpts from a 1927 film in which the bridge, less than 5 years old, was destroyed to make way for Lake Tillery.

Several times she paused the film, asking the children questions to engage them in what they were seeing. She asked them to guess what they thought would happen next.

The children answered her questions with enthusiasm and great interest, particularly when the U.S. Army and its role in the bridge’s destruction was discussed.

At the conclusion of the film, children were divided into three teams and asked to design and build their own bridges.

Each team first sketched out a design, then constructed their bridge. When the bridges were completed, each team tested the strength of their bridges, using a cup of pennies. Each bridge, unique in design, withstood the penny test.

With the successful testing of their bridges behind them, children then learned how to make ice cream, an activity designed to tie in to the boat that sells ice cream to boaters on Lake Tillery.

As each ingredient was placed into their small zip-loc bags, children worked together, helping one another with measuring and pouring. The small bags were then sealed and placed in larger bags containing ice and rock salt.
Smiles and laughter filled the room as the children shook their bags for the five minutes required to create the much anticipated ice cream.

The next STEM Saturday will be at 10 a.m. Oct. 6. Albemarle native Brad Perry will discuss how he designed and built a replica of the Apollo 16 Command Module in his basement when he was 16 as well as his career with NASA.

The module, as well as other artifacts associated with it, are currently on display at the museum.

After Perry’s presentation, participants will design, create and shoot off ghost rockets to celebrate Halloween.

Space is limited, therefore reservations are required. Parents are asked to call 704-986-3777 or email, msullivan@stanlycountylibrary.org to make reservations.

Shelia Simpson is a freelance contributor for The Stanly News & Press.