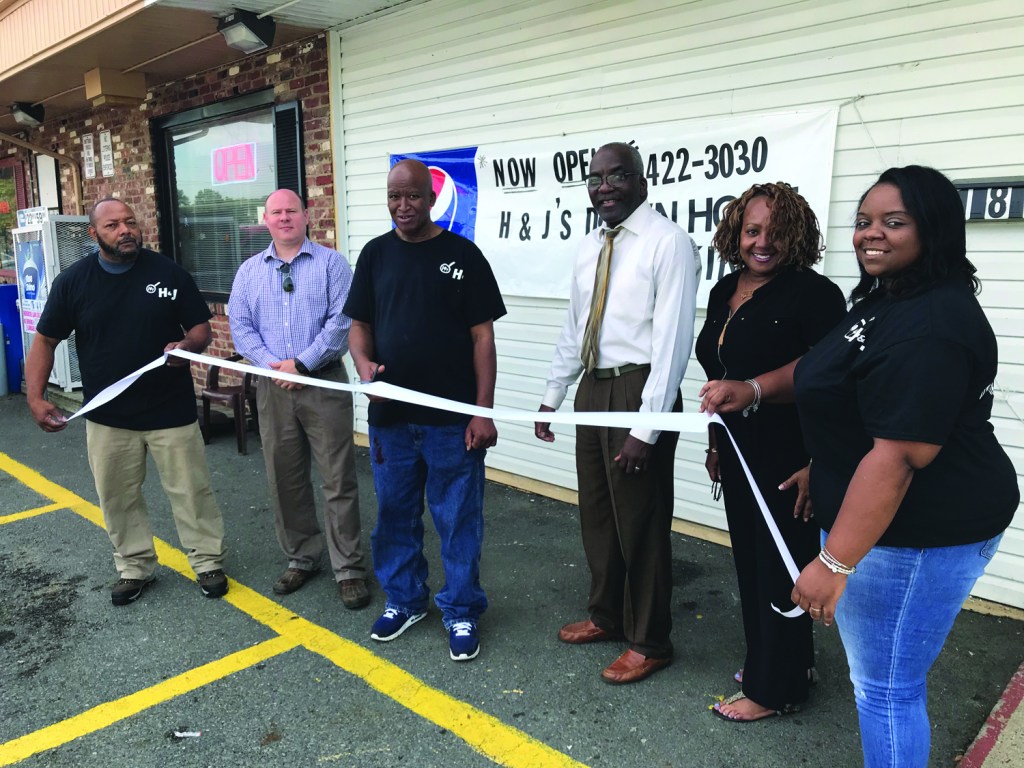 It’s not every Tuesday morning in Badin that strains of “How Great Thou Art” rise above traffic noise on N.C. Highway 740 and Falls Road.

Of course, Tuesday wasn’t just any day for Harry Brown, who cut the ribbon for the grand opening of H & J Down Home Cooking and Catering. Brown’s ribbon-cutting event made it official — dreams really do come true.

A friend of Brown, Sheila Star Washington of Greensboro, sang out the good news to folks getting fill-ups at Andy’s Badin Mart next door and to people driving pick-ups and golf carts on Falls Road.

Brown’s pastor, Michael Scott, came to the restaurant to pray a blessing over the staff, the customers and the entire community.

On Saturday, a 40-inch LED television and DVD player will be given away to the winner of Brown’s raffle.

This is a man who believes in celebrating.

For 30 years Brown has worked in food service, with the last 19 years at Bethany Woods Nursing and Rehab Center.

His experience as a kitchen supervisor fed his long dream of ownership, and his family and friends have joined him in this endeavor.

Former classmate Jimmy Jackson of Badin signed on as a business partner. Brown’s cousin, Walter Harris, has taken on the cooking duties, and Andrea Temple, a former co-worker, followed Brown out the door of Bethany Woods into a new line of work as a member of the wait staff at H & J.

“I wanted a change from CNA work, and I had to have his back,” said Temple.

Organization on the job and taking care of customers is important to Temple.

“Things are getting better and better,” she says.

Brown continues with his job at Bethany Woods, but plans to be on site at H & J’s as much as possible.

“I like dealing with people,” says the man from New London. “We’ve had some good days. The early crowd is growing. We’re open from 6 a.m. to 8 p.m. Monday through Saturday, though we may close earlier once the time changes.”

Brown’s specialty — baking cakes — means something fresh and gooey like German chocolate and red velvet tempt all but the most disciplined customers on a daily basis. Plus, who can resist all that down home sweetness for just $1.75?

Catering is also part of Brown’s and Jackson’s business plan. They already have two wedding events on the calendar in October and November.

“The café will help build the catering business,” says Brown, “and I’ll cook whatever they want.”

Harris brings 44 years of food service experience to this small town enterprise via ever growing Orlando and Disney World.

He has Badin roots through his mom, Dorothy Harris, who was born just across Falls Road in the Badin Hospital in 1941.

Business partner Jimmy Jackson served in two wars with the U.S. Army and has traveled the world for 30 years, but now he’s joining up with Brown to open a restaurant in his hometown.

Jackson’s daughter, Sherika King, was on hand at the opening festivities, ready to assist as needed.

Brown sees the Badin location as a starting place and already knows he wants to expand.

A sign on the wall over the door says, “With God All Things Are Possible.”

From what Scott has observed in the years he’s known Brown, the new restaurant owner believes in the impossible.

He tells how they often talked about what Brown wanted to do and the times he came close, and things slipped away.

Scott marvels, “He kept sticking with it. He didn’t give up on his dream.”

Brown, Jackson, Temple and Harris want to serve the people of Badin and area visitors. They invite everyone to stop by between now and Saturday to purchase a $1 raffle ticket and enjoy Grand Opening week discounted prices, such as $1 pancakes and $2 hamburgers.