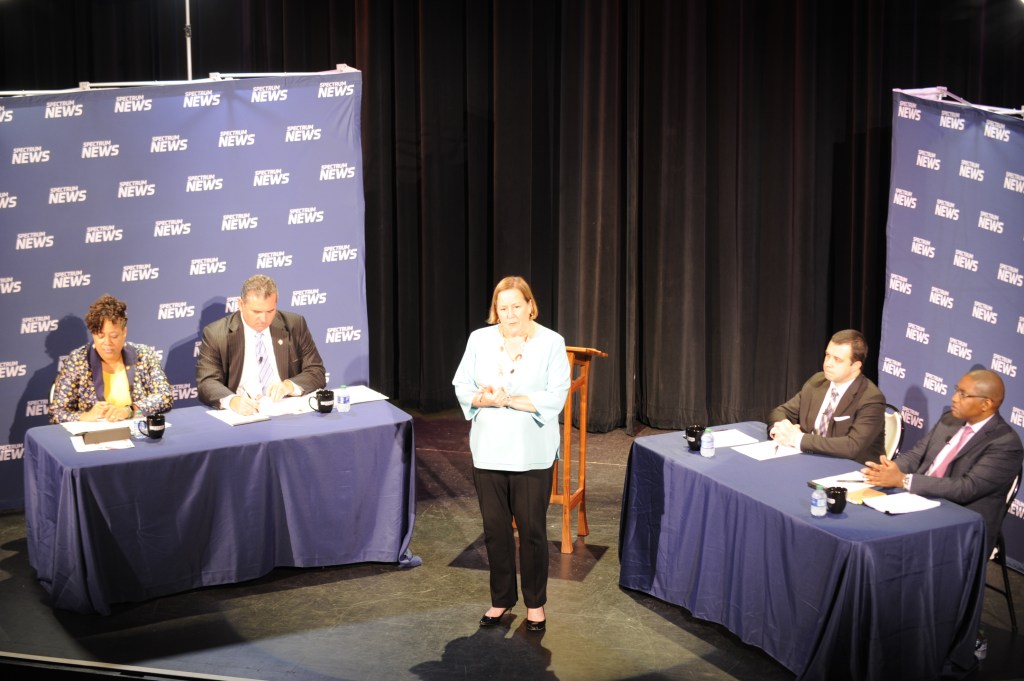 The debate was the second in a series of four weighing the pros and cons of four of the six constitutional amendments that will appear on North Carolina ballots Nov. 6.

The third Hometown Debate, to be held Oct. 9 in Clayton, will focus on an amendment that would change how appointments are made to the State Board of Ethics and Elections Enforcement. The last is slated for Oct. 16 in Gastonia; the topic of debate will be the amendment proposing a maximum 7-percent cap on the state’s income tax rate, as opposed to the current 10-percent cap.

Wednesday’s debate was moderated by the Spectrum News’ “In Focus” host Loretta Boniti and will be broadcast Sunday at 11:30 a.m. and 8:30 p.m. on the Spectrum News website, www.spectrumlocalnews.com.

Smith came down firmly against the amendment that would require voters to present photo ID before voting at the polls, citing disenfranchisement of disproportionally minority voters.

She pointed to Beaufort County’s own case during the 2016 election, in which 138 voters were challenged and removed from the roles, though they were qualified to vote. Of those removed, 96 of the 138 were registered Democrats; 62 of the 96 were black, though they represent only 23 percent of registered voters.

Smith challenged the broad language of the amendment, saying it does not do enough to dispel fears that those with few resources would be able to attain photo IDs.

“We need to make sure that we can specify the types of IDs that will be allowed and (make) a 100-percent effort that they can be acquired by those who cannot acquire them themselves,” Smith said.

Bryson, who stands in favor of the amendment, pointed out that most North Carolinians support stricter Voter ID laws, as evidenced by polling by the Civitas Institute.

Bryson spoke about North Carolina being an outlier, as 34 other states require photo ID to vote, as do all the surrounding states in the Southeast.

He pointed to Georgia’s law as a good example, as the state offers free photo IDs.

While he acknowledged that voter fraud is difficult to determine, the proposed amendment is a preventative measure.

“We want to fix the problem before it exists. Voter fraud does not have to be widespread,” Bryson said.

Ultimately, the issue is about what residents of North Carolina want, he said.

“People all across the state really want this amendment,” Bryson said. “I don’t think they’re wrong.”

Clayton also opposed the amendment, stating it was too broad and places too much confidence in a legislature that has struggled with the constitutionality of past Voter ID and redistricting efforts.

“The ballot proposal here is essentially a blank check. While the public may be very comfortable with the concept, but when we’re thinking about how to implement it as the legislature has created (it), they’re asking people to trust them. They’ve broken the law before,” Clayton said.

Clayton said the broad language of the amendment means North Carolina voters could end up with a good law or bad one — one that does disenfranchise minority voters.

“We need to be exceedingly careful about what we’re getting when we’re changing an amendment,” Clayton said.

Lewis, a supporter of the amendment, said he believes its intent is to fully enable everyone eligible to vote to have that right, and the to-be-written legislation would reflect that.

“We will draft a law that will withstand constitutional scrutiny,” Lewis said.

Lewis said simply stating name and address to identify oneself at the polls is not enough to prevent voter fraud and leaves openings for fraudulent voters to impersonate other voters. Requiring photo ID would prevent that, he said.

“Voter ID is constitutional. It is not an impediment to show you are who you say you are,” Lewis said.

Lewis said he supports free photo IDs and assisting voters with obtaining them.

“It’s a simple concept. If a person doesn’t have such an ID, we’ll find a way to get it to them,” he said.