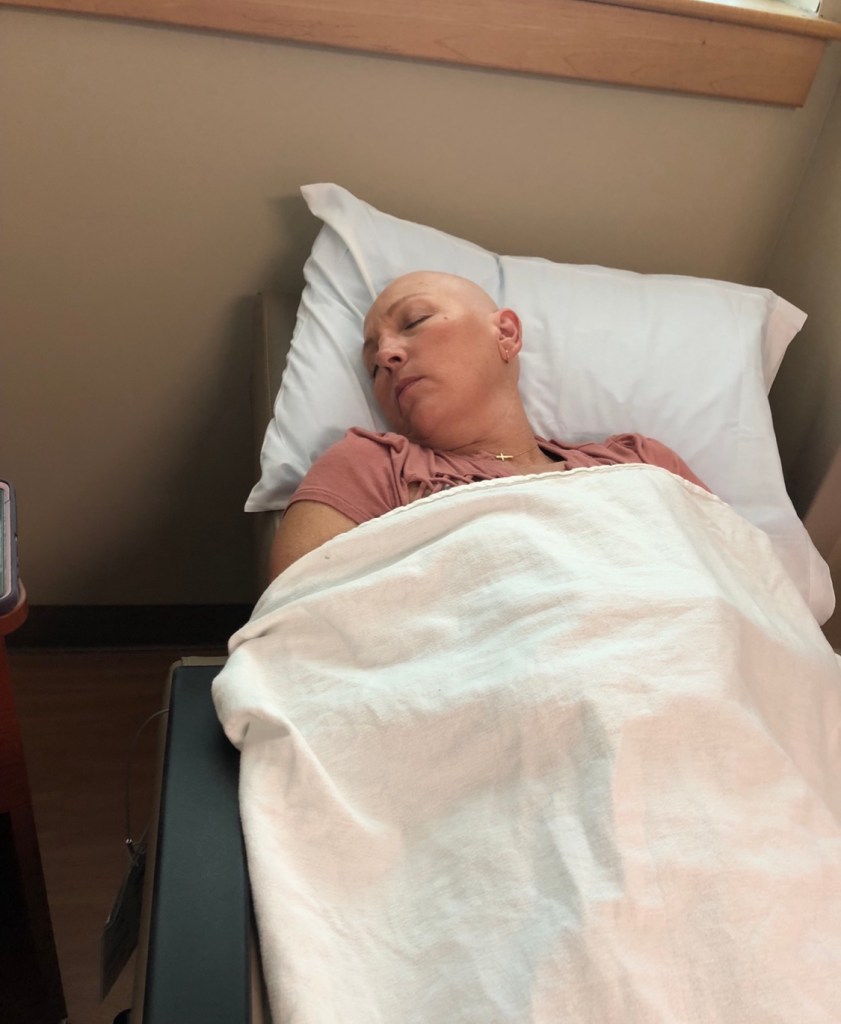 CONTRIBUTED Though treatments have often left her drained, Connie Blalock chose to share her story to inspire others to keep fighting.

By Shannon Beamon, Special for the SNAP

The day Connie Blalock had to shave her hair was a tough one. A lot of it had already fallen out from the chemo, but it was still hard to let it go.

She wore a bandana at first. Even thought about wearing a wig. But neither felt right. In the heat of summer, the bandana gave her hot flashes; the wig never made it out of its box.

“Eventually I called my daughter and said, ‘Tell me the truth. Will I look stupid if I quit wearing this thing? I’m so uncomfortable and I’m so hot,’ ” Blalock said. “She told me, ‘No mom, you’ll rock it.’ ”

Ever since that conversation with her daughter, Blalock has left both wig and bandana at home. As the owner and operator of Glory Beans Coffee House in Albemarle, that has meant a lot of questions, but that doesn’t bother her anymore.

“I realized I was more concerned about other people being shocked or uncomfortable,” Blalock said. “I don’t see myself as ridiculous. I still see myself as beautiful and strong. Except probably stronger. I’ve learned more and listened more to my heart and to God.”

And since October marks both a year since her cancer appeared as well as Breast Cancer Awareness Month, she hopes her story will encourage other fighters to see themselves that way, too. 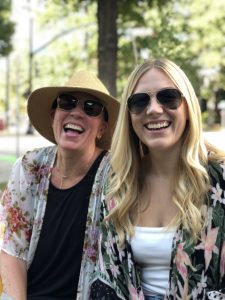 Like many facing cancer, her story begins with the something unremarkable. Just a small sore spot on her breast.

In fact, the first time Blalock noticed the tiny lump, she didn’t think much of it. After a call to her doctor, who gave her some self-tests to go through. She decided it was nothing serious.

However, at a regular appointment a couple of months later, she decided to get it looked at, just to be safe. They ran a mammogram.

“When the results came in, they were suspicious, so we did an ultrasound,” Blalock said.

“After the ultrasound, they wanted to do a biopsy.”

By February, she was officially diagnosed with invasive ductal carcinoma, a form of breast cancer.

“When I found out, there was, of course, a lot of fear, sadness,” Blalock said. “I was crying, thinking about my girls and my business… I just wanted to go home.”

When she got home though, she didn’t just curl up. She went into a room and prayed. She prayed for a good long time. And when she came out, panic had lost the largest part of its grip on her heart.

While still worried, she found herself believing that nothing was out of control. And if the outcome to her situation was in bigger hands, then that meant she was free to focus on the fight against cancer.

“I think that set me off on the right track through this whole thing,” Blalock said. 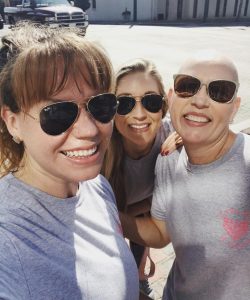 Connie Blalock, right, is joined by Caroline Brothers, a supportive friend and Glory Beans customer, and Hannah Vick, Connie’s youngest daughter, at the Paws for a Cause fundraiser conducted in September.

However, even that could not prepare her for the marathon that is breast cancer treatment.

“I’m not a sickly person,” Blalock said. “When I do get sick, it’s normally just for a day or two.”

So when her first round of chemotherapy left her nauseous for days on end, she despaired that she might never feel better.

“I really struggled with depression after that,” Blalock said. “It makes you worry that you’ll never be normal again.”

During that time, Blalock also had to go through two surgeries in four weeks. The first was a right side mastectomy in April, the second on her lymph nodes in May.

“The second one actually hit me harder,” Blalock said.

While treating her for breast cancer, doctors found cancer in her lymph nodes, as well, she said. The surprise diagnosis as well as the stress of a second surgery knocked the wind out of Blalock physically and emotionally.

“I’ve always been a strong woman, the one who’s there for others,” Blalock said. “I didn’t want to think I needed help.”

But physically, she just couldn’t get into the coffee shop some days. Emotionally, she couldn’t always stay upbeat — especially on the weekends after chemo treatments.

“It was just me alone with my thoughts those days,” Blalock said. “It wore me down.”

Her daughters, Natalie and Hannah, were the first to step in and help. They started coming up on the weekends after Blalock’s chemo treatments to keep her company.

Her employees also stepped up, offering to take extra shifts at the shop even before Blalock could ask them.

“People want to help,” Blalock said. “That’s one of the biggest things I’ve learned. It’s okay to ask for their help. To speak up and let them know what you need.”

The more Blalock opened up, the more she realized just how many people wanted to help, too.

Soon customers brought her books and baked goods, cards and encouragements. Get-well drawings from kids soon spanned her walls. Fundraiser fliers were scattered across the counters.

Several people started working together to help her, too. One of her regular groups took up a special love offering toward her medical bills. Friends organized T-shirt sales, coffee deliveries and a dog-walking event to help with that, too.

“Never in my life have I had so many gifts than in this period of the past several months,” Blalock said. “I think God knew I was going to need that support.”

Prior to being diagnosed with cancer, she noted, Blalock was actually thinking about selling her coffee shop.

“I was actually a little frustrated nothing had worked out yet,” Blalock said. “But then one morning (after starting cancer treatments) I woke up really sad and exhausted, dragged myself into the shop.”

As she set to work, though, customer after customer encouraged her, prayed for her. And as she was talking with one, a thought struck her.

“In that moment, I felt like God was telling her ‘Hey, you wanted to get out of this place, but I kept you here because you needed these people,’ ” Blalock said. “I can’t imagine how I could have done this without them.”

And while breast cancer — and particularly involving mastectomies — can carry a stigma that keeps people from talking about it in public, Blalock said she has had little problem talking about her latest news with the friends who come through her shop.

Whether it’s celebrating her last upcoming chemo treatment, or praying about the radiation treatments to follow, the reactions of the community have made it easy to open up, to be herself.

To take off that bandana as it were.

“The main thing this community has given me is love unconditionally,” Blalock said. “And because of that I have this freedom. I don’t have to wear something to feel better about myself. Or to have others feel good for me… that’s one of the biggest gifts I could ask for.”