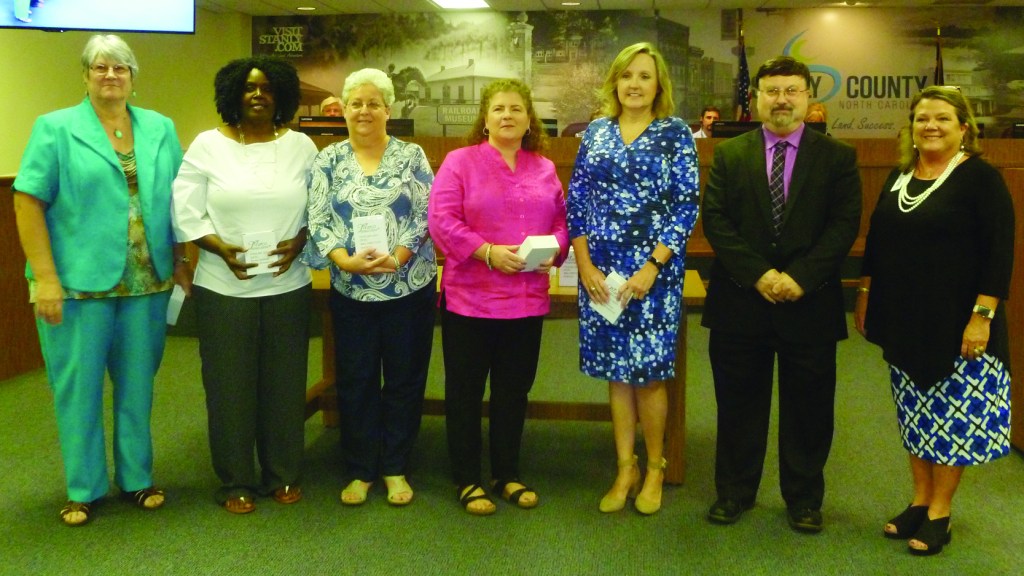 The Stanly County Board of Education recognized the county’s Principal of the Year and recently-retired school system employees during its regular meeting on Tuesday evening.

East Albemarle Elementary School Principal Jonathan Brooks was unable to attend the meeting, but the board did announce that he had been awarded the honor.

“We were fortunate enough today to get to visit Mr. Brooks at East Elementary and actually surprise him in the lunchroom with his kids,” Superintendent Jeff James said.

James read a statement written by a student praising Brooks, as well as a glowing statement submitted by staff.

James said they were a small sample of the letters his office received praising Brooks.

“I’d just like to add, not only does he have good interaction with his students, I think he does with the community, and that’s essential,” board chairman Melvin Poole said.

“To all of you standing before us tonight, you have made a lasting impression on the world through the students of Stanly County,” Vicki Calvert, assistant superintendent of personnel and student services, said. “You have earned our respect and our admiration. Thank you so much for your service.” 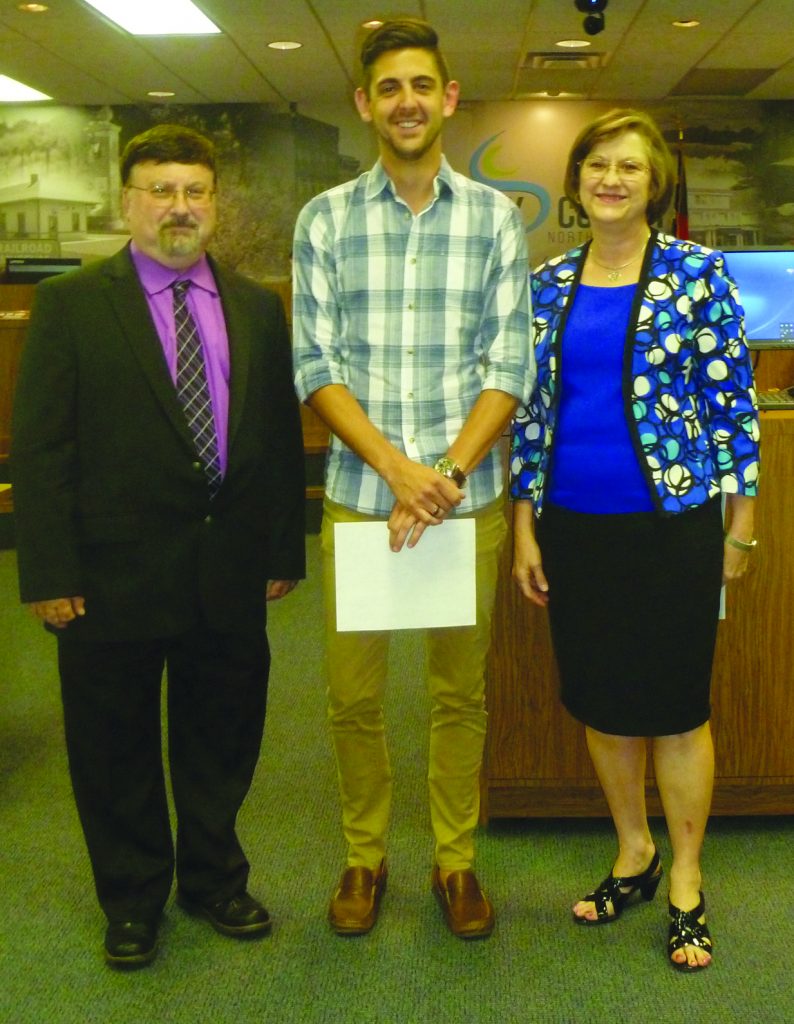 “Lynn does an outstanding job for our district as a teacher leader and he works tirelessly to help teachers improve their instruction as well as working with students and parents on a daily basis,” Brooks said.
Brooks said the grant was one of only two awarded in North Carolina.

“This grant will provide funds for professional development sessions for parents at Central, and the goal is to focus on helping parents with instructional guidance and to practice strategies they can use at home with their students, or children,” Brooks said, adding that the parents will be given resources.

Plummer was given an award for winning the grant to help families at Central.

Devron Furr, principal of Albemarle Middle School, told the board about his school’s achievements.

Furr said the school is “ethnically diverse” and has 92 percent of its 371 students on free and reduced lunch. The school offers three physical education classes, STEM, art, music and band, and several sports.

This year, the school will focus on “teaching with a sense of urgency” and on collaboration and planning, he said.

Furr said the school offers an art club and will have a computer programming club.

The school’s robotics team was second in the state last year, followed by 42 schools behind it, he said. It also won the 2017-18 Stanly County Schools Battle of the Books.

Furr noted his school, a middle school, works with feeder schools, those with lower grade levels and whose students will advance to a higher-level school.

Albemarle Middle was also chosen to join Schools that Lead, “a group of schools that work together to find solutions in a collaborative systematic way to improve student academic achievement,” Furr’s PowerPoint read.

Albemarle Middle is one of many schools from across the country that are members.

Scottie Heglar, a resident of Richfield, approached the council with concerns about traffic safety issues he said are connected to school traffic by Richfield Elementary School. The intersection of School and North Main streets presents a safety problem, he said.

Heglar said he had already provided the board with a letter written by himself and one of his neighbors. He had also sent photos showing the problem as additional documentation.

Heglar said he also wanted to speak with the board in person.

“Most of you, I know you know we’ve got terrible traffic problems in Richfield,” he said. “The North Main Street neighbors [are] the ones suffering the most, as far as getting out of our driveways and stuff.”

Heglar said that one day, the issue will become more than an inconvenience.

“There’s been a lot of near-misses there,” Heglar said. “One day it’s going to happen.”

Heglar asked the board to look into the issue, adding the problem was investigated by the North Carolina Department of Investigation about six years ago and was determined to be a school issue.

“As a community, and all of y’all and the schools, I’d love to see us all come together to come up with some kind of solution to this,” he said. “I don’t see it getting any better. It’s progressively getting worse, with more car riders and all. I’m just asking for help. Getting out of our driveways is one thing, but there’s going to be a bad accident.”

Poole suggested holding a joint meeting with the Richfield Town Council to discuss the issue further.

“I know we have gone up and looked at the situation,” he said. “It’s not a good situation, and there doesn’t seem to be a good solution to correct the situation.”

Heglar suggested linking School Street to a nearby industrial center, though he noted it would be expensive.

Poole asked the superintendent to schedule a joint meeting with the Richfield Town Council.

Three representatives from Education Solution Services spoke to the board about the possibility of the school system hiring the company to manage its substitute teachers.

“ESS is a company that serves about 650 school systems nationwide for substitute staffing services,” he said.

“So this is a turnkey holistic program that takes that completely off your plate so you can focus on teachers. You can focus on the recruitment, hiring, training, development of your teachers, licensure, gets a lot of that off your plate so you can focus on that,” he added. “In addition to having us take that responsibility, substitutes also qualify for benefits through our company, they get paid weekly, so there are a lot of benefits to working with our company that they get to experience when they come to work with us.”

The subs would continue to be managed through the Aesop system that the school system currently uses, but would outsource the other responsibilities. Leboff said that ESS has had several meetings with district staff members already.

The representatives said training is available, too, and they often try to find retirees to do the training.

Board member Patty Crump asked if existing subs would be affected. Leboff said that the school’s recommendations would be enough to bring them to ESS, and that the subs would have new benefits.

ESS and the school system would have an annual contract with the right to renew for four years, he said. It “gets close to cost-neutral” considering the time currently spent by staff members doing what this company would do, Leboff said.

Watson made a motion to approve hiring ESS, but withdrew it after Crump and Poole said they wanted more time to research ESS personally.

Ben Roundtree and retired educator Anabel Speight spoke during the time for public comment to voice their support for the sales tax increase that will be voted on next month.

Both are chair-members of Citizens for Safer Schools, Roundtree said. Both pointed out that the sales tax increase will not affect property taxes and will directly benefit the schools, helping to boost school security.

Speight pointed out that anyone with doubts or concerns can visit Stanly County Schools’ website to see a list of what would be purchased with the additional funding.

“I truly hope all of you are on board for this,” she said. “If not, as a retired school teacher, I need to talk to you.”

Citizens for Safer Schools will hold its next meeting at 6:30 p.m. Oct. 16 at the E.E. Waddell Center.

The board will hold its next regular meeting at 7 p.m. Tuesday, Nov. 6 in the Stanly Commons meeting room.