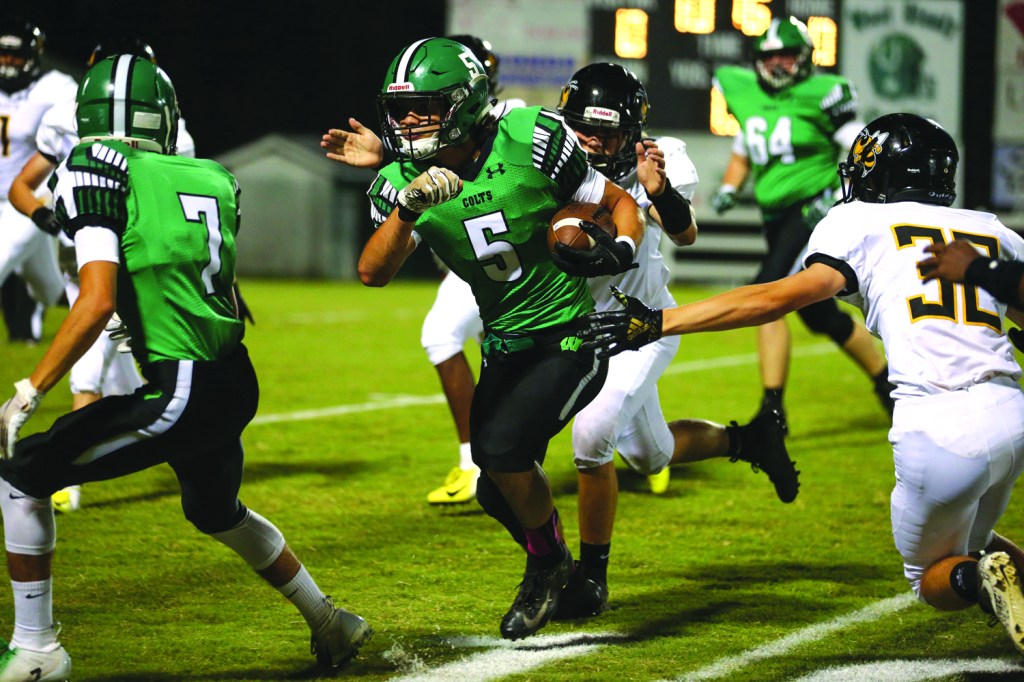 Photo by EARL BRADSHAW Lukas Scott works to turn a corner on his way to a touchdown in the Colts’ 55-48 victory Friday night over Forest Hills.

A go-ahead touchdown run by Jordan Poole with 22 seconds left gave West Stanly an exhilarating homecoming win in what was the highest combined scoring game in the school’s history Friday.

Poole evaded multiple Forest Hills Yellow Jackets (1-6, 0-1) in his 11-yard dash that gave the Colts (4-3, 1-0) a 55-48 win. The play was followed by a successful two-point conversion scramble from quarterback Nick Parker.

Trailing by a single point with three minutes to play, the Colts could have notched the lead with a field goal in their final drive; however, those ensuing eight points provided more security in what had become a shootout with the Yellow Jackets.

“We got down the field and got bogged down a little bit,” West Stanly head coach Brett Morton said. “I didn’t know if we were going to have to kick it or not but Jordan Poole made a special play. At the end of the day, that’s the playmaker doing what he has to do.”

As the ball bounced off the hands of multiple players and onto the ground, West Stanly’s home crowd erupted, having seen the Colts’ fourth-highest scoring output ever (55) and the most combined points since their 58-37 loss to Cuthbertson in 2011.

“Man, this was fun,” Morton said. “We don’t beat Forest Hills very often so this is huge for us. We finally got going on offense. The defense isn’t where we want it to be at, but at the end of the game they stood up when we needed them to stand up. Those guys did a heck of a job all the way through the end — they played hard, one play to the next.”

In what was such an offense-centric matchup, a handful of players on each team did most of the heavy lifting.

West Stanly’s Parker, back in the lineup after recovering from an injury, was a part of five of the Colts’ eight touchdowns. He connected with senior

Lukas Scott on six-yard and seven-yard touchdown passes to give his team a lead in the second quarter.

The powerful running back tandem of Scott and Poole accounted for the Colts’ other scores.

On the Yellow Jackets’ side of the ball, running back Kendrick McLaurin was nearly unstoppable. The senior had four touchdowns to go along with more than 200 rushing yards.

Rorie was successful through the air, giving Forest Hills a balanced effort; the senior found Jaqulin Burch and J.J. Williams on touchdown routes.

The Colts will follow up their huge conference win with a bye week and a home matchup with East Montgomery on Oct. 19.