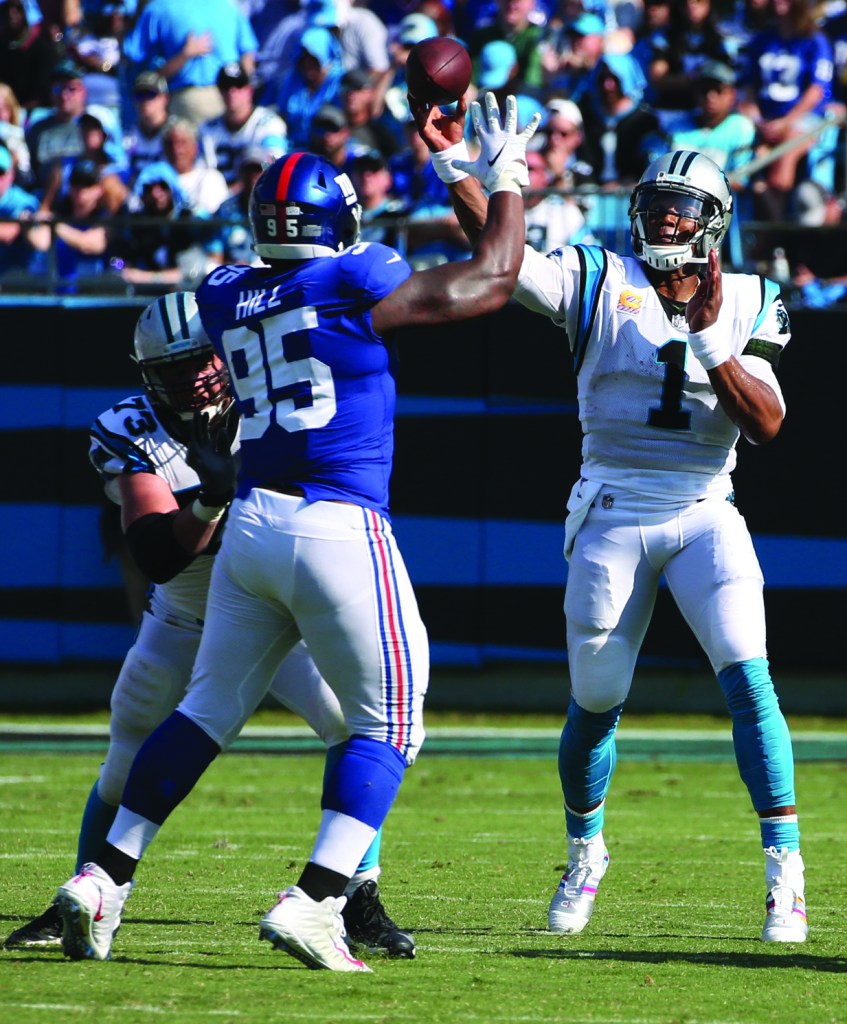 Sunday’s NFL homecoming for Oakboro native B.J. Hill was bittersweet as his New York Giants narrowly lost to the Carolina Panthers in the final seconds to a record-setting field goal and one of the home team’s most memorable games.

The improbable 33-31 defeat left for a somber visiting locker room after the game. A dejected Hill spoke sparingly and softly about the loss before suggesting such is life in the National Football League.

“This was a hard one, especially because I’m from here. But, you have to get ready for the next one,” Hill said after the game. Working on a short week, the Giants host the Eagles Thursday night.

Not only did the Giants (1-4) play well enough to win, but probably should have if not for Panthers kicker Graham Gano booting a 63-yard game winning field goal with 6 seconds remaining in the game.

Gano’s bomb of a kick set a record as the longest game winner in NFL history. It was also the Panthers’ longest field goal in team history, breaking his previous mark of 58 yards set last year in the postseason. The Panthers’ previous regular season record belonged to John Kasay at 56 yards.

Gano’s kick to beat the Giants is second only to Denver’s Matt Prater who booted the league’s record setter at 64 yards.

Despite the obvious post-game despair, Hill, a former gridiron standout at West Stanly High School and later at N.C. State, graciously met a contingency of family and friends all donning Giants’ No. 95 jerseys in honor of Hill. There were white ones, blue ones, red ones, even a pink jersey, in honor of October’s breast cancer awareness, all bearing Hill’s name across the back.

His family and friends were all smiles, sharing hugs with Hill before the team boarded a bus to depart the stadium.

Although he was unable to return to Oakboro during the visit, Hill said he met family and friends in Charlotte over the weekend and before Sunday’s game.

When asked how many tickets he had to supply, Hill said: “I didn’t have to buy any.”

New York’s run defense held the Panthers to 118 yards rushing on 31 carries for an average of 3.8 yards.

Hill’s only miscue on the day was when he jumped offsides near the end of the third quarter. Carolina was facing second down with 12 yards to go for  a first down when Hill jumped. However, the Giants quickly recovered the 5-yard penalty when Carolina’s Jarius Wright committed a false start on the next play.

Hill was chosen by the Giants with the 69th pick of the third round in this year’s NFL draft.

As for his biggest adjustment since playing for the Wolfpack of N.C. State, Hill called “speed of the game” and simply learning a “new playbook” as the biggest challenges of the jump to the NFL.

In a game where a lead never seemed safe, the Giants had a chance to answer Gano’s booming kick with a game winning miracle. With 1 second remaining in the game, Gano kicked off to Giants’ receiver Odell Beckham Jr. 9 yards deep in the end zone.

Beckham ran for 26 yards, then tossed a lateral to Curtis Riley who ran for 27 yards to the 41 yard line. Riley then attempted to lateral to Sterling Shepard who fumbled the ball out of bounds to end the game.

Prior to Gano’s game winner, New York mounted an impressive drive to take the lead. With only 2:16 to play from their 25 yard line after a touchback, Giants quarterback Eli Manning quickly led his team on a four-play, 75-yard drive in 67 seconds. The seemingly ease of the drive exposed defensive lapses that have plagued the Panthers in the early 2018 season, despite a 3-1 record.

“We made some mistakes and we’ve got to get that corrected,” Rivera said.

Rivera shouldered some of the responsibility for Carolina’s near collapse in a game the Panthers led 17-3 in the second quarter.

Officials ruled Newton’s deep pass to tight end Ian Thomas as incomplete. Rivera challenged the call, but the ruling was upheld after a review.

Rivera admitted he was furious about the call and the officials’ inconsistency about what is a catch.

“I think I lost my composure and it may have affected my team,” Rivera said.

New York seized the momentum and inched closer to regaining the game’s lead since scoring first with a field goal in the first quarter.

Toward the end of the game the Giants mustered its furious come from behind touchdown.

After a pair of short passes, 8 yards and 12 yards, respectively, Manning went to no huddle and connected to Russell Shepard for a 40-yard gain. From the Carolina 15 yard line, Manning then connected a short pass to running back Saquon Barkley who leaped into the end zone for the go-ahead score, 31-30.

Starting at their own 25 after the touchback, the Panthers began a comeback attempt. After an incomplete pass to wide receiver Curtis Samuel, quarterback Cam Newton connected to D.J. Moore for 20 yards at the Carolina 45-yard line.

Newton’s next pass to Devin Funchess fell incomplete. Next, he completed a 9-yard throw up the middle to running back Christian McCaffrey at the Giants’ 46 yard line, prompting the Panthers to call their third and final timeout with only 30 seconds remaining.

In a surprise play, given the time left on the clock and no timeouts, the Panthers chose to run McCaffrey up the middle for a 1-yard gain and a first down. As the clock ticked away the Panthers hurried to the line of scrimmage when Newton spiked the ball to stop the clock with 12 seconds remaining. A final pass attempt deep left to Wright fell incomplete, leaving 6 seconds and Gano’s eventual game winner.

After the game Rivera was asked on a scale of 1 to 10 how nervous was he about the turn of events.