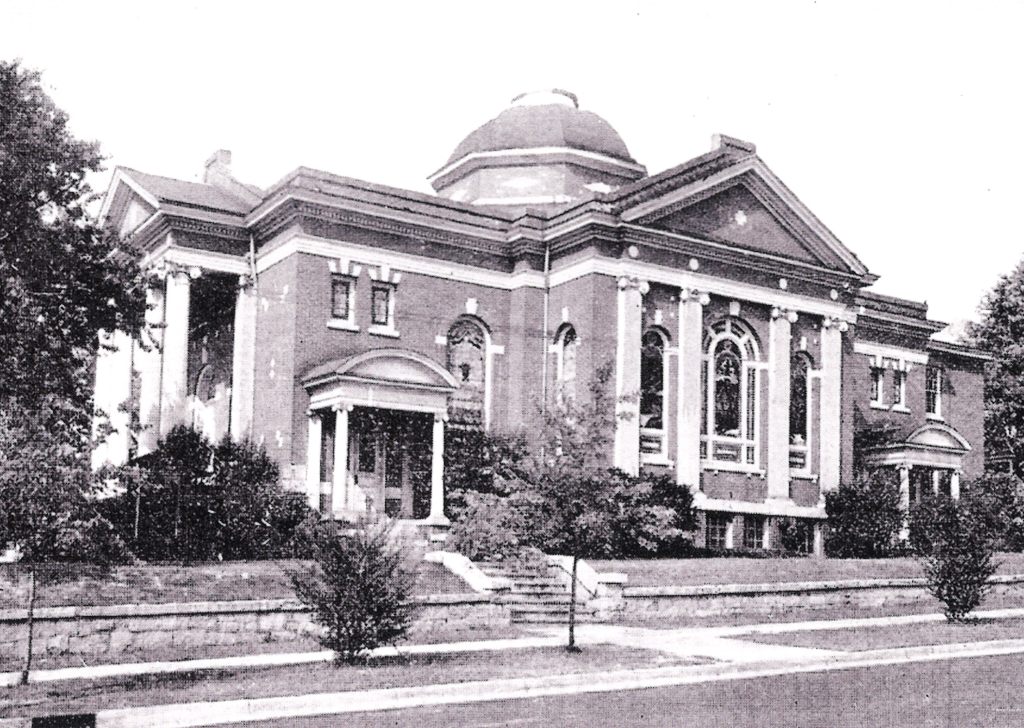 Contributed In 1918, First Baptist of Albemarle completed the construction of its church building and began seating the congregation. The first sermon in the church was Nov. 24, 1918, with the Rev. Q.C. Davis preaching both a morning and an evening worship service. Since the church was built, there have been three renovations, the first in 1951.

By J.C. Boone, for the SNAP

The First Baptist of Albemarle congregation will celebrate 100 years in its sanctuary at 10:30 a.m. Oct. 14. There will be special programming and music for the event along with homecoming for present and former members. The community is invited to join the celebration.

It all began with a meeting of a small group of people at a brush arbor in “New Town,” and nearly one year later on June 30, 1889, the Albemarle Baptist church was officially organized with seven charter members.

The first small wooden church was occupied in 1902, at the corner of North and Third streets. The early history of the church was one of financial difficulty and was often unable to pay its bills.

During a severe thunderstorm in the early 20th century, the tall steeple on the church was blown off. A called church conference met to determine what should be done to repair the building. At the conference $6.50 was pledged to repair the roof, and it was decided to sell the steeple and it sold for $7, making a total of $13.50. There had previously been talk of building a new church and that was renewed.

By April 1912, plans were begun for a new church building and on May 12, A.P. Harris, chairman of the property committee, announced to the congregation the availability of the Presbyterian Manse property for $3,000.

Approval was given to the trustees to mortgage the church property, if necessary to raise the funds. In June the first reference was made to the congregation as the First Baptist Church.

On March 14, 1914, The Albemarle Enterprise declared, “The First Baptist Church of Albemarle is soon to have one of the most magnificent structures in Piedmont, N.C. The lot has already been purchased and paid for…Work on the new building will begin in a short time. Plans have been made and approved.”

The Stanly Enterprise in early July 1917, published an article which stated, “The First Baptist Church is now nearing completion and it indeed presents an imposing and dignified appearance from the public square. It has been stated no building in the community adds more to the appearance of the town than this magnificent structure, and the Baptist congregation is to be congratulated.”

On April 21, 1918, Rev. Walker resigned to accept a call to a Wilmington church, but he agreed to preach the first sermon in the new church.

The first sermon in the new church was Nov. 24, 1918. New pastor Q.C. Davis preached both the morning and evening services. A memorial service was conducted for the former pastor, Rev. Walker, who had passed away.

There are no historical records regarding the stained-glass windows that enhance the worship experience of the congregation.

There have been three renovations of the sanctuary, the first in 1951.

For 100 years the congregation and community have gathered to worship, to enjoy special events and to gather for concerts in this edifice.