Learn about Stanly’s Teacher of the Year 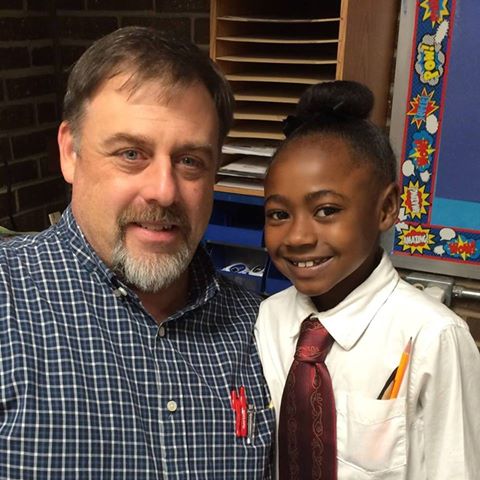 Contributed Jeff Little, left, is joined by former student Amari Kilgore-Baldwin, who dressed up as Little for Dress Like a Superhero Day at East Albemarle Elementary School. Little was recently named Teacher of the Year for Stanly County Schools.

Jeff Little was only named Stanly County’s Teacher of the Year last month, but Little has been a real-life superhero in his classroom for years.

Little, a second-grade teacher at East Albemarle Elementary School, was named Teacher of the Year during the board of education’s September meeting. He was picked from a pool of nominees, all Teachers of the Year at their own school.

When he began his career, Little never planned to go into education. He spent about eight years working for window manufacturers and 12 years at Locust Lumber in Monroe.

It was only after his wife encouraged him to go back to school that Little made the switch to education.

“A lot came down to my wife [who] got tired of hearing me complain that I wished I had been a teacher,” he laughed. “She actually made me go back to school full-time. I’ve just always had a talent working with kids. I’ve had a natural ability to communicate with them and develop good relationships.”

Little was heavily involved in his son’s school activities, going on nearly every field trip his class took.

“I would always end up with a big bunch of kids with me because they listened to me and they would do what I would ask them and we’d have a good time,” he said. “My group was usually one of the quietest or usually one of the best groups, and everybody was like, ‘Hey, you know, you’ve got a talent for this. Have you ever thought about being a teacher?’ It planted a seed, and then I watched the benefit my son got from teachers who developed good relationships with him, the benefit there, and I was like, ‘I can do that.’ ”

After graduating from Pfeiffer University in December 2012, he began at East Albemarle partway through the school year in January 2013 and has been there ever since.

Little said he knew the shift would be a large change from his time in sales.

“I can honestly say I didn’t go into it blind,” he said.

“Being an older adult and being a parent, I was a Scout leader, I’d worked with kids and I knew it wasn’t going to be all sunshine and rainbows, every day isn’t going to be great — I knew that kids have days, they have bad situations, bad things that they have to deal with, and I knew coming in that there’d be things beyond my control that I’d have to deal with, that the children have to deal with,” he added. “So just that parent experience, and that experience working in Scouts, I knew that it was not an easy profession. It’s a rewarding, fulfilling profession.”

Teacher of the Year 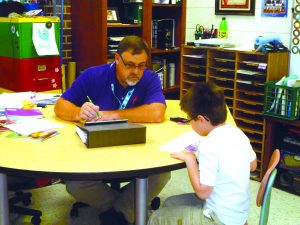 “I know I work hard,” he said. “I work hard and I try to lead by example. I said, ‘I’m not going to tell people what to do, but if I see a problem, I’m going to do everything I can, and if people want to follow along, that just makes it that much easier.’ Just as the typical person who stands up in front of everybody and says, ‘You do this, and you do this,’ no, that’s not my leading style. I try to lead by example.

“And I don’t care as much about — and I don’t want it to sound wrong, but I made the statement in there, ‘If they don’t learn anything more everyday than the ABCs, 123s, I want them to learn to be a better person,’ ” Little added. “I’m about building relationships with my students, because if you can’t build them, they can’t learn. I don’t know if that’s what they were impressed with … if you can’t get a kid to like you and work for you, they’re not going to learn. You have to find a way to connect on a personal level with them.”

Little said his students know he loves them.

While he was honored when East Albemarle selected him, Little felt there were other candidates more qualified.

“To be quiet honest, I told [East Albemarle Principal Jonathan Brooks], ‘I don’t feel I deserve it. There are a bunch of other teachers that need it. Go ahead and give it to them, because I don’t feel like I deserve it.’ He said, ‘Tough, the staff voted on you and you’re it, so just accept your fate,’ ” Little laughed. “And when I went for the interview process, I told them how I felt, I told them what I thought, and I just figured it was left at that. I had no idea.”

“I was just going to go in and get recognized for East Albemarle Teacher of the Year,” he said. “Get my plaque and go. When I walked in and I saw my wife, and my mom and my sister and my son and my daughter there, I thought, ‘Hmm, something’s up.’ I still didn’t quite know because I thought my wife was being all, ‘Your mom is going to be here at the meeting to see you get your East Albemarle award.’ When they called my name, it was overwhelming. I really, really wasn’t expecting it.”

When county school staff asked if he wanted to speak, he declined. 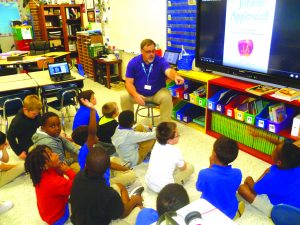 Contributed
While playing a reading of the story of Johnny Appleseed on the screen, Jeff Little pauses to ask the students questions about the story or time period.

Stanly County Schools Superintendent Jeff James said Little is deserving of the honor, and the $500 check that goes with it.

While James wasn’t on the selection team, he did say there is a “rigorous process” to determine the Teacher of the Year.

“It’s not one of those things where we just pick somebody,” James said. “There’s a team that comes in and looks at all attributes.”

When a staff member is up for consideration as the county Teacher of the Year, their qualities are provided with their nomination, in addition to the interview process.

“He cares for kids,” James said, adding that he was told Little “seemed to stand out among his peers” to the team during the interviews.

“I think he’s a very caring individual,” James said. “We were happy that he was chosen, I think that he epitomizes a great teacher and the great things we’re doing here.”

Oakboro Tractor and Equipment sponsored the $500 check gifted to the Teacher of the Year.

“They can decide to put it toward classroom needs, but I can tell you every teacher probably spends $1,000 out of their pocket,” James said. “I would hope they’d actually take it and enjoy a day or two of vacation. I can tell you, again, as a teacher I couldn’t claim all the money I put in my classroom and this, again, is a quality of the Teacher of the Year. They’re going to make sure the kids have whatever (they need).”

As rewarding as the recognition of his peers and the school community is, some of the greatest moments of his career lie not in professional accolades, but in the simple honor bestowed on him by his students.

Little has a superhero theme in his classroom. Someone stepping into the room would be hard-pressed to find a space not covered in pictures, themed posters and more decorated with a wide range of bigger-than-life characters.

Like a Superhero Day at school, they didn’t wear masks and capes — they wore ties and pens, dressing as their real-life hero, “Mr. Little.”

“I told somebody, ‘My theme in my classroom is superheroes, and I’ve had two students make me feel like I was 10 feet tall and bulletproof because on Hero Day they came dressed up as me,’ ” Little said. “One was a little girl who came dressed up with her tie and her pocket with the pen in it, because I’m usually walking around with a pen in a shirt pocket. But she came dressed up as me that day, and her mom came up to me that day and said, ‘You know, it was superhero day at school, who is your hero? And she wanted to come dressed up as you.’ I don’t even know how to express it. That made me know I’m definitely doing what I’m supposed to be doing.”