LIVING AFTER LOSS: Mom talks about 15 days that changed her life 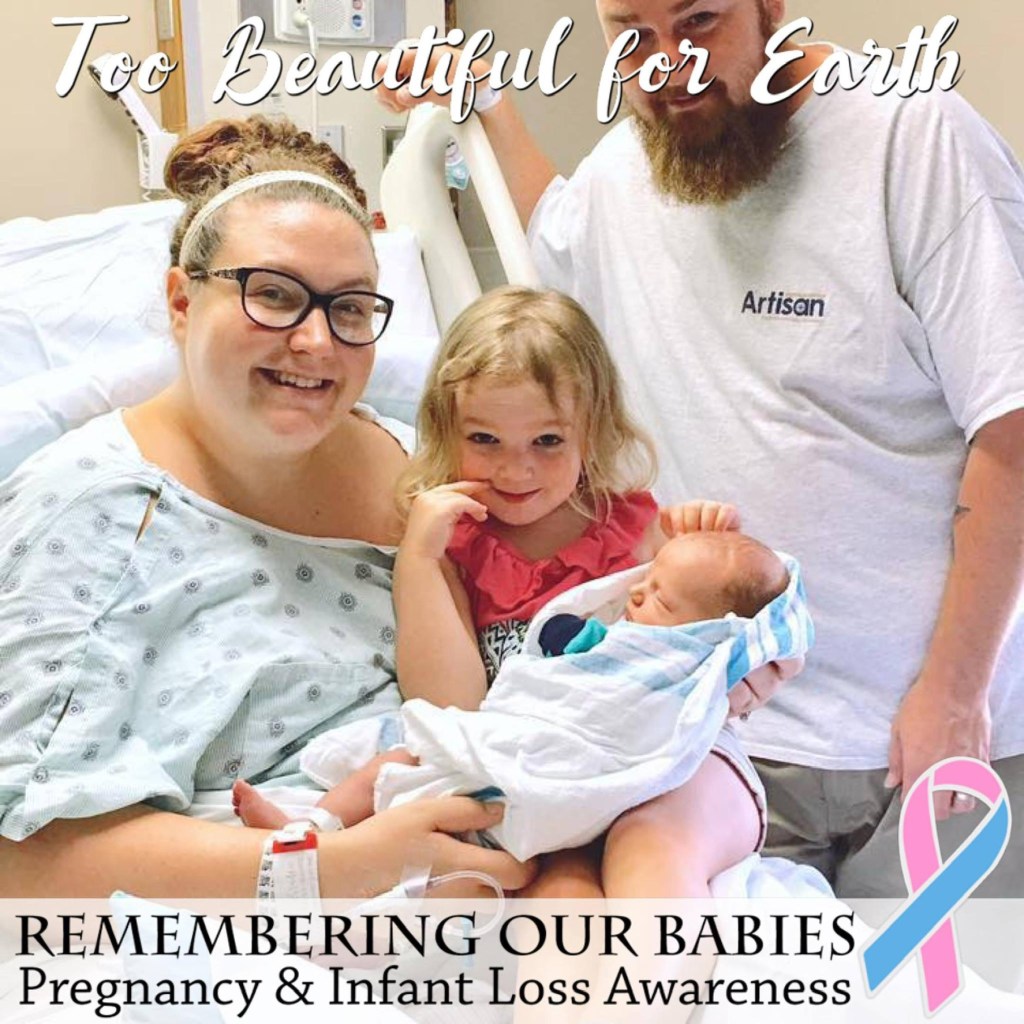 Contributed The Lentzses welcomed baby Silas for a short stay on earth, but he remains part of their family long after his 15 days of life. Pictured: Hannah Oakley Lentz, Maysie Makenna Lentz, Silas Alan Lentz and Michael Alan Lentz.

The gentle color pink has also appeared as a harbinger of this month’s Breast Cancer Awareness emphasis. Bracelets, scarves, ribbons and tees for women and men drape stores and bodies in recognition of the fight to eliminate breast cancer — that unwelcome and unexpected intruder into the lives of one in eight women in the United States.

Often hidden behind these October hues are the grey shades of grief. A grief one in four women (and men) experience through the loss of a baby. Sometimes during pregnancy, sometimes at birth and sometimes before the infant’s first birthday.

These women and men and their babies have names.

Hannah Oakley Lentz gave birth to a healthy son on Aug. 11, 2017. Hannah and her husband, Michael, welcomed Silas Alan Lentz with love and affection, introduced him to his sister, Maysie, and took him home, but only for a few days.

The day Silas was to have his first check-up quickly turned from bad to worse. A deadly unnamed enterovirus led to sepsis and a medical emergency — a living horror story for the Lentzes.

Hannah and Michael weren’t allowed to accompany their newborn on either of the helicopter flights to two hospitals. They drove themselves, arriving from one to three hours after their son, endured excruciating waits in hospital corridors to watch their tiny fighter hang on to life through eight days of agony.

“I just wanted to hold him one last time,” she said. “I rocked him, kissed his head and told him he could rest. He didn’t have to fight anymore. I heard him draw his last breath…”

On Jan. 19, 2018, Hannah poured out her broken heart on a blog post. She was “tormented by images of those last few minutes…having to make the decision to stop trying to save my sweet baby boy…I’m stuck in a nightmare…I want to remember him the way he was before the hospital, before he got sick. He was perfect.” 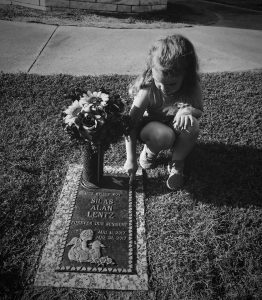 Contributed
Maysie Lentz visits the grave of her brother Silas.

Most readers do not know Hannah or Michael or Maysie, and almost no one knew Silas. The Lentzes long for their baby’s life to be acknowledged and remembered.

“This month we remember the babies who went before us. We remember our sweet son, Silas, his big blue eyes and sweet smile; the way he snuggled up to his daddy’s beard. We miss him every day,” says Hannah.

The Lentzes want Stanly County folks to add Pregnancy and Infant Loss Awareness Month to their October calendars, like President Ronald Reagan did back in 1988.

Since 2006, all 50 states have made an annual proclamation accordingly.

“As you think pink,” Hannah asks, “remember to add a little blue.”

One beribboned pink and blue social media hashtag says, “Save the boobies! Remember the babies!”

This week the Lentzes carved a pumpkin for Maisie and painted a sunflower on one with Silas’s name in the center.

“We will light a candle at 7 p.m. on Monday, Oct. 15,” she said. “It’s called the Wave of Light. The idea is that at 7 p.m. in any timezone you light a candle in remembrance of the babies who have gone before us and let it burn for an hour, keeping a continuous wave of light all over.”

Hannah says she has turned to Facebook groups often, such as Miscarriage and Infant Loss Support Group, and A Mother’s Grief.

In these forums she’s able to share some of the harder things that she’s comfortable talking about only with other moms who’ve walked in her shoes.

She says it’s therapeutic and makes her feel less alone to read other stories.

“A lot of parents, especially when there’s a stay in the hospital, suffer from PTSD, anxiety, depression…sometimes just knowing you’re not alone can make a big difference,” she said.

As helpful as social media and online resources are, they can’t give real hugs or a shoulder to cry on.

Hannah admits that “initially, we weren’t in a good place to speak with anyone. But as we could see in color again, we sought out support — and mostly found none.”

In this virtual world of 2018, flesh and blood support groups do exist, but the closest group that Hannah found is in Charlotte.

“With our schedules, it hasn’t been an option and I feel like that’s what needs to change,” she said.

The Lentzes would love to see a local observance for other Stanly County families affected by pregnancy and infant loss.

A hard thing for anyone mired in grief is the silence they hear. In the 24/7 news cycle, Hannah laments a missing voice about Pregnancy and Infant Loss Awareness.

And she understands that in social encounters, most people don’t want to upset or stir up emotion in them.

“I think really, people don’t know what to say, and that’s okay,” she said.

Hannah quotes Elizabeth Edwards: “If you know someone who has lost a child and you’re afraid to mention them because you think you might make them sad by reminding them that they died — you’re not reminding them. They didn’t forget.”
Parents of these little girls and boys often refer to them as “angels.” Perhaps Hannah speaks for other parents when she says, “We don’t want to feel alone, and above all, I think we all just want our angels to be remembered.”

A Wave of Light service is being held at Carolinas Health Care-Northeast in Concord at 6:30 p.m. Monday. The community is invited.

Editor’s Note: Part 2 of 2 will appear in an upcoming edition of The SNAP.