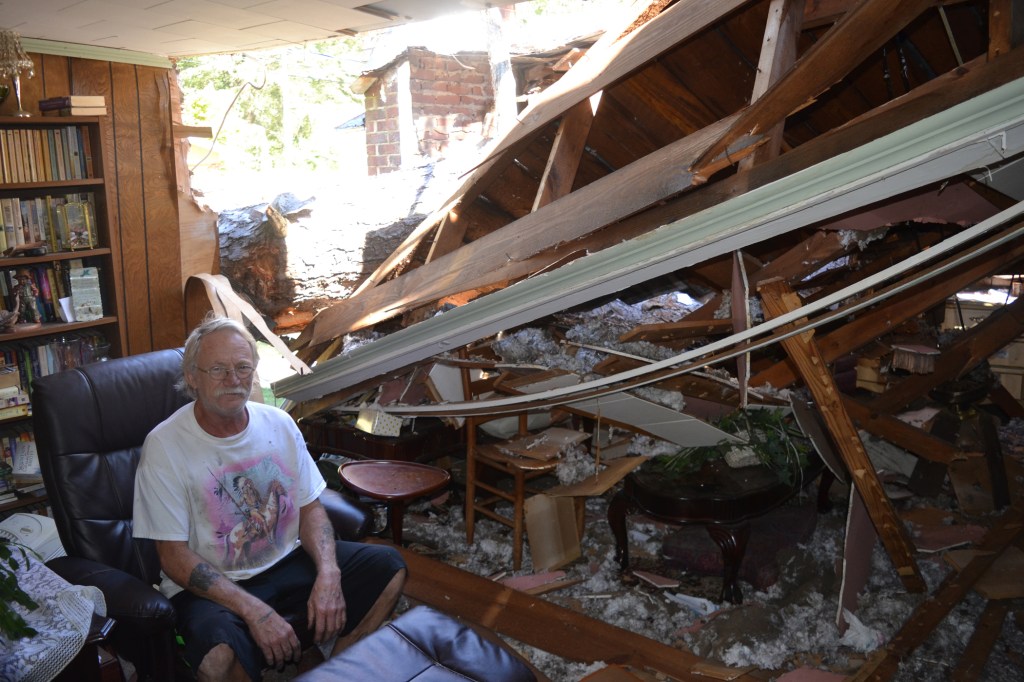 Ronnie Russell sits in the living room of his elderly mother's house and where a tree crashed through during Thursday's storm. He had to pull his pinned sister and nephew from the damaged house.

First a pounding deluge, then a roaring wind followed by a spree of sirens with first responders racing to render help.

What was left of Hurricane Michael jetted through a storm-weary Stanly County Thursday as a tropical storm. Michael dumped more rain on an already soggy ground left by Hurricane Florence less than a month ago. Then came wind gusts that toppled trees onto houses, cars and outbuildings. Downed power lines caused spotty electrical outages throughout the county.

One family narrowly escaped tragedy when a large tree fell and split their home at the corner of Eben Street and Henning Drive around 3 p.m Thursday.

“My mom heard a noise, got up to look out the door and that’s when a tree fell right where she had been sitting,” Ronnie Russell said.

His sister and nephew were trapped by the fallen tree until Russell pulled them to safety.

Between heart problems and the excitement of the ordeal, paramedics hospitalized his 87-year-old mother as a precaution. 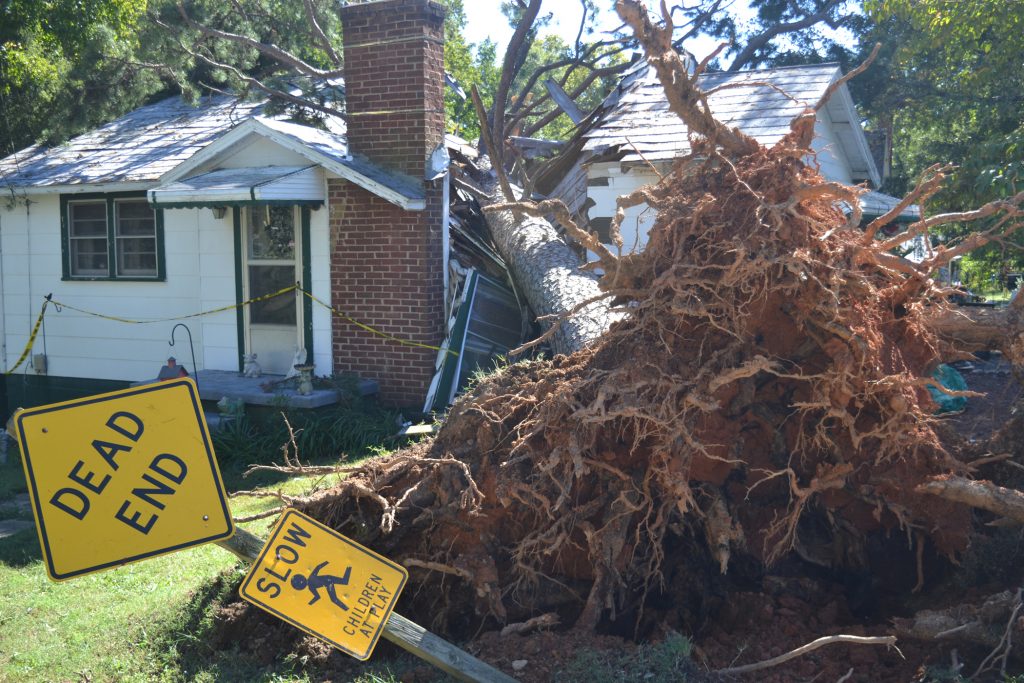 More rain and gusts from Hurricane Michael, turned tropical storm, caused this tree to fall and split a house at the corner of Eben Street and Henning Drive near U.S. Highway 52. No one was hurt, but the incident led to the hospitalization of 87-year-old Stella Russell.

Three deaths in North Carolina have been attributed to Michael. A man and a woman died after their car hit a large tree that had fallen across a road in Marion. An Iredell County man died when a tree fell on his car.

“We extend our heartfelt sympathy to the loved ones and friends of those killed,” Gov. Roy Cooper said in a press release. “We urge everyone to remain safe. While the storm has moved on, there is still much clean up and repair to be done.”

Making landfall as a Category 4 hurricane, Michael caused most of its devastation before arriving in Stanly.

Not so much the amount of rain as the speed of the drenching led to the flooding.

By mid-afternoon as many as 80 area roads were blocked due to flash flooding or fallen trees. Eight homes were damaged and one person had to be rescued from the flood waters, Simpson said.

Michael’s rain, a day after an unrelated downpour, did not match Florence’s drenching but the late gusts proved especially damaging.

“What was powerful were the backside winds, which brought down most of the trees,” Simpson said.

Overall, Florence proved more destructive to Stanly, likely because it was a four-day event opposed to Michael’s quick-moving system.

At least 11 fatalities have been attributed to Michael, including five in Virginia that perished in floodwaters before the storm veered toward the Atlantic Ocean. The death toll, however, is expected to rise as several people along Michael’s path remain unaccounted for.

No part in the storm’s path experienced the destruction as the Florida Panhandle where entire communities lay in ruin. What were homesites now contain litters of debris.

Despite local damages and flash flooding, Stanly appears to again have dodged what could have been much worse.

Stanly County Schools was among the state’s 30 districts to cancel classes Thursday and delayed opening Friday.