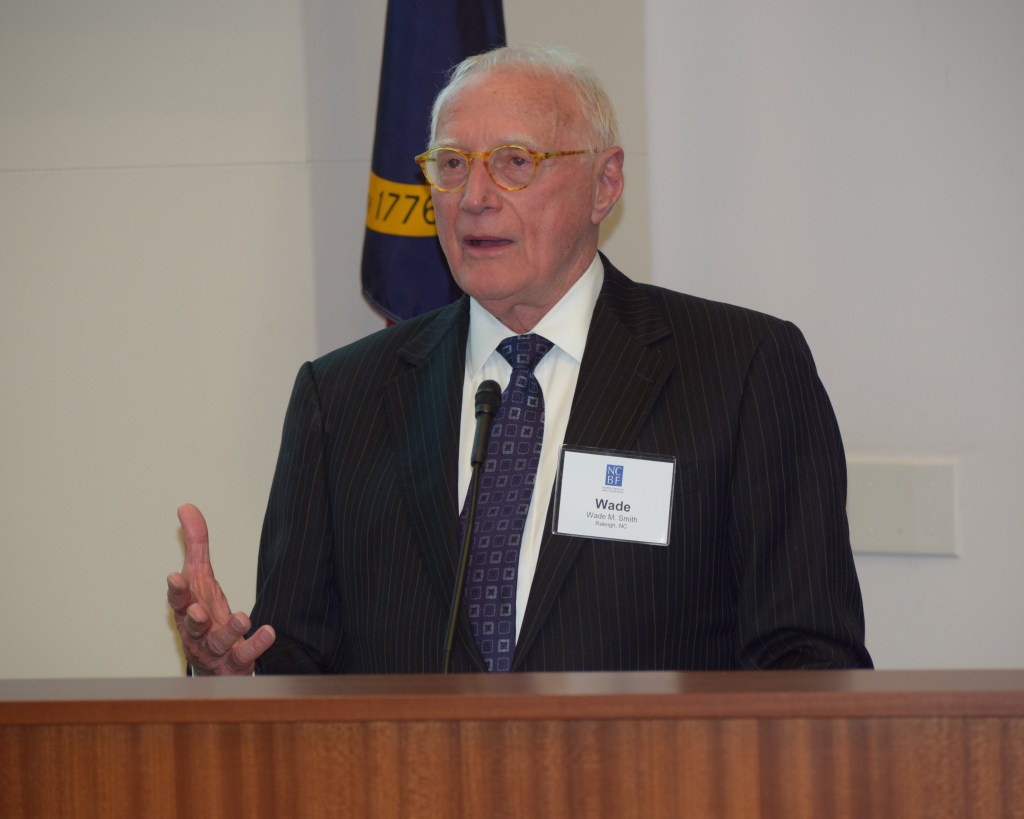 Wade Smith speaks at the dedication this week.

The fund will help the NCBF Endowment sustain and strengthen its support of civil legal services for the poor provided through its Legal Aid of North Carolina Fund.

Speaking on behalf of Smith were longtime friend Jim Blackburn and the Rev. T. Melvin Williams, co-founder of the Religious Coalition for a Non-Violent Durham.
George Hausen spoke on behalf of Legal Aid of North Carolina, where he serves as president and executive director.

“Thank you for today,” Smith said in his brief acceptance remarks. “It means so much to me. Together we are doing something that will make a real impact.

“I want to fully embrace this moment and remember this moment. Amazing things are happening and we are making things happen. Your North Carolina Bar Association is making an enormous difference.”

Smith was born in 1937 in Albemarle. The son of textile workers, Wade and his younger brother, longtime law partner Roger Smith, were raised in a mill village called New Town.

They were standout athletes at Albemarle High School and standout football players at the University of North Carolina at Chapel Hill. Both attended UNC as Morehead Scholars and both are members of the Stanly County Sports Hall of Fame.

Wade Smith received his bachelor’s degree in English from UNC in 1960. He served as co-captain of the football team his senior year, completing his career with a 50-0 victory over Duke.

He proceeded to the UNC School of Law, graduated in 1963, and clerked for Justice Carlisle W. Higgins of the N.C. Supreme Court. On Sept. 1, 1964, he joined J. Harold Tharrington to form Tharrington Smith, where he continues to practice.

From 1964-66, Smith served as a prosecutor in Wake County Superior Court, after which he began his work as a trial lawyer. In 1973 he was elected to the first of two terms in the N.C. House of Representatives, and in 1985 he was elected to a one-year term as chairman of the North Carolina Democratic Party.

Smith has also served as president of the Wake County Bar Association and the 10th Judicial District Bar, the Wake County Academy of Criminal Trial Lawyers and the UNC General Alumni Association. UNC honored him in 1989 as the recipient of its Distinguished Service Medal.

He received the Joseph Branch Professionalism Award from the Wake County Bar Association in 1998 and N.C. State Bar’s John B. McMillan Distinguished Service Award in 2013.

Within the ranks of the North Carolina Bar Association, Smith is one of its most decorated members. In 2008 he received of the H. Brent McKnight Renaissance Lawyer Award, which was established by the Professionalism Committee to honor attorneys who demonstrate the “Renaissance Lawyer” qualities embodied by Judge McKnight, who died in 2004 while serving on the U.S. District Court for the Western District of N.C.

In 2015 he became the 37th recipient of the Judge John J. Parker Award, which has been considered the NCBA’s highest award since its establishment in 1959 in recognition of an individual “who has strengthened the American system of freedom under law.”

NCBF Endowment Justice Funds honor North Carolina lawyers, past and present, whose careers have shown dedication to the pursuit of justice and outstanding service to the profession and the public. Justice Funds are established through a gift of $50,000 by one or more contributors. (a law firm, group of attorneys, associates and family members).

North Carolina lawyers designated and honored by the creators of a Justice Fund receive special recognition in the form of a permanent copper-etched plaque and biographical sketch maintained at the N.C. Bar Center.

The NCBF Endowment was established in 1987 and has awarded grants totaling more than $6 million for more than 750 projects that further the Foundation’s mission to unite the generosity and talent of the profession to be a power of greater good for the people of North Carolina.

NCBF Justice Funds advance the Foundation’s values of access to justice, service through the profession, civic education and professionalism.