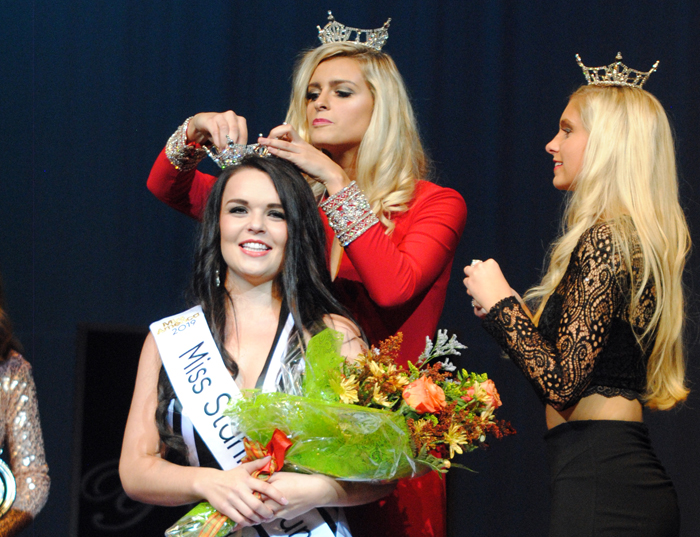 The 2018 Miss Stanly County Scholarship Pageant crowning ceremony Saturday at the Stanly County Agri-Civic Center celebrated the past while also selecting two young ladies to represent the county for the upcoming pageant season.

A number of former Miss Stanly winners and Outstanding Teen winners were recognized, including 1989 winner Beth Whitley Sharpe celebrating the 30-year anniversary of her win.

“It’s very exciting to be back; I haven’t been back in 28 years,” Sharpe said. She said the Stanly pageant “was a really great growing opportunity for me…it builds confidence.” 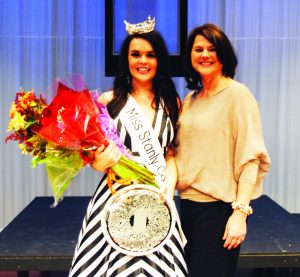 She added the Miss America program gives young women the opportunity to be in the public eye and to have a platform “to speak out for others who may not be able.”
Sharpe used her scholarship award to earn a master’s degree in elementary education at the University of North Carolina at Charlotte, with which she taught first and second grade for 22 years.

The old saying of “good things come to those who wait” had another example to add to its repertoire at Saturday’s event.

Egan said “the timing never seemed right” for her to compete for the crown over the years, including her time in nursing school.

“I knew when I came back to compete for the crown, I had to to have the mindset of if I win this I have to dedicate that entire year and give this my everything, which my county deserves,” she said.

Egan, a Pfeiffer University graduate who works in medical sales, has seen much of the impact in North Carolina and South Carolina from the devastation left by Hurricane Florence.

“It’s been a tough year…it’s challenging, but we’ve overcome it,” Egan said.
During the talent portion of the event, Egan performed her rendition of Lee Greenwood’s patriotic song “God Bless The U.S.A.”

In the question session, Egan was asked by the event’s host, Wes Tucker, what would be the first thing she did if she won.

After saying she would celebrate, Egan said she would be “excited to come back and speak to local high schools and the community” and “to be a positive influence.”
With her second question, Egan was asked how to convince a young person to volunteer their time with a veteran.

“It’s all about the stories. When you have experiences with them, you hear their story. They have told you about their PTSD and experiences in the war. It’s a very powerful story,” Egan said, adding after hearing those stories “it’s hard for anyone to turn their back on them.”

The platform for the newly-crowned Miss Stanly is suicide awareness among veterans, something Egan said she has seen and worked closely with vets who suffer from depression or post-traumatic stress disorder.

Egan recalled one veteran she worked with who was diagnosed with depression and PTSD. Other health conditions of his worsened and he was given six months to live, but before he was granted the benefits for which he qualified, he passed away.

“That got my blood boiling and broke my heart,” Egan said.

With the greater emphasis on mental health and suicide awareness, Egan said, “the veterans are still being overlooked slightly. It’s my mission to bring awareness to that cause.”

Egan has already reached out to local Veterans Administration offices, including the hospital in Salisbury to begin her campaign.

She added “the first step is education,” saying she will “spread the word and share my stories, acquire new ones and get people passionate about this need.”

The new Miss Stanly County received a $1,000 scholarship, crown and sash for her victory from last year’s winner, Megan Frick.

Karie Grace Shields, a West Stanly High graduate who is attending Pfeiffer University, was named first runner-up on Saturday and received a $300 scholarship.

More information on the Stanly County Pageant, including Miss Stanly Outstanding Teen, will be published in Thursday’s SNAP.