SCC’s board of trustees, faculty and staff are elated the school’s president did not get the top job at Forsyth Tech.

Obviously there’s some disappointment for Stanly Community College President John Enamait on a personal level, but the overall sentiment professionally is one of relief. Relief because SCC’s leader will stay put and implement the college’s strategic plan over the next three years.

“While I thought Dr. Enamait had an excellent chance of being selected, I know I speak for the board in saying that we are truly relieved,” said Robert Stonestreet, board chairman. “I believe he is disappointed, but I know he realizes he has a great opportunity here at SCC to see his initiatives through to fruition. We look forward to our future with John at the helm.”

Enamait first informed SCC’s board, then his faculty and staff, last week that he failed to advance past the four finalists named as the next potential president at Forsyth Technical Community College in Winston-Salem. 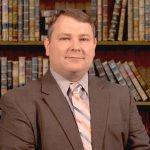 “I’m humbled by the support  that I received by not just the board but my faculty and staff,” Enamait said. “Overall, the sentiment I’m getting is that they’re relieved and happy I’m staying.”

He added that everyone was hopeful for him and his family for the opportunity of professional and career advancement. Forsyth Tech is the fifth largest community college in the state.

A search firm contacted Enamait and enticed him to apply for the upcoming vacancy at Forsyth Tech as the school’s present president is scheduled to soon retire. Enamait, SCC’s president for the past two years, first declined but then relented after continued encouragement.

While Enamait acknowledged the rejection bruised his ego, he also admitted that he’s pleased with his current job and living in Stanly County. Even he expressed relief the experience is behind him.

As SCC does for its students, Enamait encourages his faculty and staff to seek opportunities of professional growth and development.

“I try to practice what I preach,” he added.

The pool for Forsyth’s successor began at 60 applicants before it was pared to 11, then four.

Enamait, a product of the community college system, was the only male candidate, current college president and the youngest of the applicants.

The State Board of Community Colleges is slated to meet Friday when it will likely approve Forsyth’s recommendation for its next president.