Hardy will begin her duties for the city of Albemarle on Nov. 13 and fills the vacancy created when Christina Alphin accepted the position of town administrator with the village of Marvin. 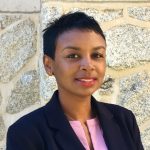 As assistant city manager, Hardy will assist with overseeing the day to day operations of the city, which include the operation of an electric system, water and wastewater system, a landfill facility, public housing department, a parks and recreation department operating several parks facilities and programs, police department, fire department and many other traditional city services and departments.

The city conducted an extensive search and evaluation process to identify the next assistant city manager. A select group of candidates participated in a two-day interview and evaluation process conducted by an assessment panel comprised of local citizens representing business and industry, the non-profit sector, and the local government management profession.

Hardy was born and raised in Pitt County and grew up primarily in Ayden, a small town outside of Greenville.

She earned a Bachelor of Science and Master of Business Administration from East Carolina University.

While in the county manager’s office, Hardy was charged with a varied scope of work and special projects working directly with the county’s executive team and the Board of County Commissioners on policy development, agenda setting, community planning, budget development, fiscal management and legislative affairs.

In her spare time, Hardy enjoys outdoor activities, visiting municipalities across the country and spending time with her family.

“Nyki comes to the city with a well-rounded background in local government and particularly strong experience with service delivery and project management,” City Manager Michael Ferris said. “Through the evaluation process it was exciting to see a candidate who was so well prepared and who had done such comprehensive research, not only on the organization, but on the community. It was clear to me and everyone that interacted with her during this process that she wanted to be a part of what we have taking place in Albemarle. Overall, I am very pleased to have Nyki as part of the city of Albemarle team and she will be a tremendous addition to the community.”