Living With Loss: Families want to help others dealing with infant deaths 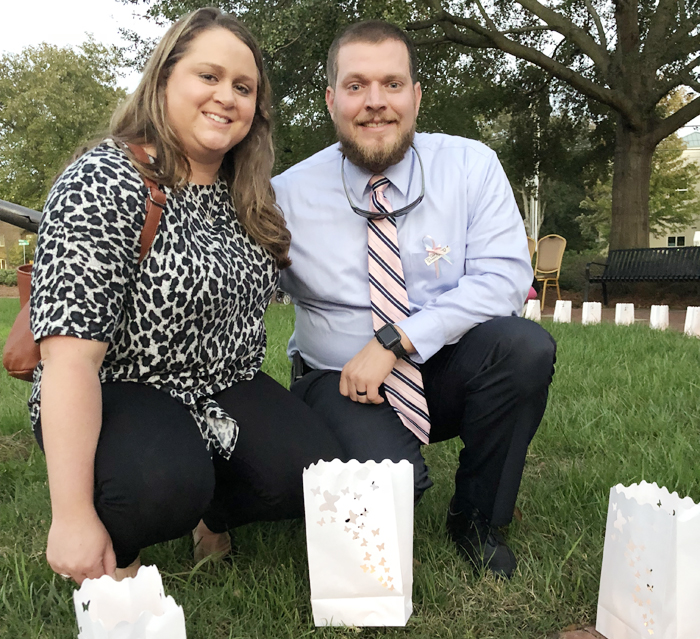 Lauren and David Cooper at the recent Wave of Light service to honor Bexley Grace. (Contributed)

David Cooper is no stranger to grief since he serves grieving people from all over Stanly County.

Cooper works for Stanly Funeral and Cremation Care in Albemarle. His personal assistance to Hannah and Michael Lentz after the death of their infant son on Aug. 26, 2017 made a lasting impression on the grieving family.

This August, one year after the loss of her baby Silas, Hannah Lentz came across an obituary for another infant, Bexley Grace — the daughter of David and Lauren Hatley Cooper. Hannah understood what the Coopers were going through.

“David treated us with compassion and empathy through arranging Silas’ funeral,” Lentz said. “He even went so far as to text and let us know when he had brought Silas from Duke back home. He kept saying he couldn’t imagine being in our shoes.”

The world crashed in on David and his wife Lauren on July 31 this year — the day they went to the hospital expecting their baby girl to be born.

“Shortly after our arrival to the hospital,” said David, “our hearts were completely shattered when we received the news that our perfect little girl no longer had a heartbeat and that induction would begin shortly to bring our sweet baby into the world.”

Those 16 hours of labor were flooded in tears. 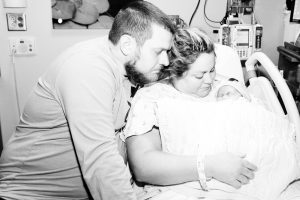 That same unexpected need hit the Lentzes hard. From the birth of Silas through his hospitalization, they were out of work. The couple recently had a specially inscribed granite headstone placed in tribute to Silas and are trying to organize a raffle to help with the cost of the headstone, said Hannah.

They’re still in the process of catching up with bills and even used a GoFundMe online appeal to help with the many expenses.

Lauren Cooper experienced the sudden loss of her father to leukemia in October last year, so their Christmas announcement that a baby was on the way brough joy and comfort to the family.

Ronald Franklin Hatley of Albemarle was Lauren’s hero, her rock and “the first man I ever loved,” said Lauren.

When the Coopers learned they were expecting a daughter, they felt their child had been hand-picked in heaven by her grandfather.

“We knew her name was Bexley Grace from that moment,” David said.

Though her dad was too-soon gone, Lauren was suddenly facing the loss of her daughter. In the hospital, after Bexley’s birth, a minister was brought in to christen her while surrounded by their families and friends.

Now I Lay Me Down to Sleep (NILMDTS), a nonprofit organization founded by a grieving mom and a professional photographer in 2005, has taken as its mission the introduction of remembrance photography to parents suffering the loss of a baby. They have seen how such images serve in the healing recovery of bereaved families.

They also sponsor a Remembrance Walk in two distant states. A graphic on their website states: “Start the conversation. Make a difference. Honor our babies.”

Like NILMDTS and the Lentzes, the Coopers invite conversation.

“Nothing makes us more proud than to be Bexley’s parents and when someone mentions her, it lets us know that she hasn’t been forgotten,” says David.
Websites dedicated to the subject of infant loss stress that grieving parents appreciate simple and heartfelt words: “I’m sorry for your loss,” or “We’re praying for you.”

A touch on the shoulder, a listening ear, a smile — just being there — goes a long way.

A seed of an idea is germinating in the hearts and minds of the Coopers to honor all the babies.

“The staff at Stanly Funeral and Cremation Care were both caring and supportive throughout the whole process,” says David.

He believes no parent should ever have to bury their child, but knows an added funeral expense can make it even more difficult.

“We are currently discussing ways to give back to our community in memory of Bexley. We want to establish a non-profit to help families that have suffered the loss of their child,” David said.

Hannah Lentz would also like to take another step forward and make a difference by helping start a fall festival or some other event to raise awareness in Albemarle during October.

“I want parents to have somewhere to turn,” she said.

“I think support is important in all stages,” says Hannah.

David and Lauren Cooper say that their shared faith has helped them carry on.

“We prayed to God and asked Him why He had to take our little girl, but we have hope that there are reasons that we don’t understand. We learned that neither one of us grieves the same, but we have supported each other through the roller coaster of emotions that we have both felt,” said David.

The couple also has praise for the support and prayers from their families, friends and the community.

Hannah Lentz says her grief sometimes feels like an everlasting dance. One dance partner in particular causes anger to rise.

“We will never know exactly how Silas contracted an enterovirus, but…it was more than likely from someone, somewhere along the line not washing their hands before touching something that came into contact with our son,” she said.

Still, hope rises beyond the anger, sadness and longing.

Hannah is thankful to God that she’s had the support of her husband through the journey.

“As hard as it has been, and I’m sure will continue to be, it makes me appreciate what and who we do have right now. I just try not to take things for granted,” she says.

“Somehow God has given me the strength to keep going. I’m thankful for that,” she added. “I have a beautiful daughter and a wonderful husband. Maysie deserves her mommy and daddy. I’m so thankful for a new outlook on life. I appreciate things a lot more than I did before. I love harder because I know what it’s like to have someone you love taken away.”