As a police officer she’s usually the one rendering help to victims. Only now she’s a victim in need of help.

One year ago Cindi Rinehart, who recently turned 53, was diagnosed with stage IV breast cancer, a disease that has plagued the women in her family for the past 18 years.  Along with her health crisis, her mother and two sisters have all suffered breast cancer.

The family’s survival of the disease lends for optimism. 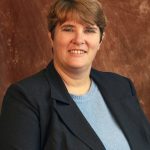 Cindi was diagnosed Oct. 17, 2017, the same day but five years later than her younger sister. Their mom was diagnosed two months after Cindi. The older sister was the first to be diagnosed. Before then, there had been no family history of the disease.

“All of our doctors feel it’s genetic; we just haven’t found the link yet,” said younger sister Chanta Cranford.

“She had a fight, let me tell you,” Cindi said of her sister’s battle.

However, Cindi’s cancer seems to be more aggressive.

“By the time they found it, it had moved to my lymph nodes, liver and spine,” Cindi said.

In May, 25-50 tumors were discovered on Cindi’s brain. Radiation treatment does not appear to have been as successful. A recent scan revealed there are now 75-100 tumors on her brain.

Because of her health crisis Cindi has had to prematurely leave her career with the Albemarle Police Department. For more than 12 years Cindi has been a police officer, climbing the ranks to sergeant in criminal investigations.

“I love my job here,” she recently said from the APD’s conference room. “I’ve never worked a day in my life here.”

Huneycutt said he knew Cindi for years before she joined the police department.

“She’s one of the kindest and compassionate people you’ll find,” he added.

Capt. David Dulin described Cindi as the department’s mother figure who officers relied on for an honest perspective.

“Cindi was one of our go-to people who we trusted and who would give us an honest opinion whether it was beneficial or not, including to herself,” Dulin said.

Cindi had already passed the exam to become captain; however, cancer treatments forced her to vacate the job before the promotion materialized. 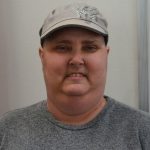 Cindi Rinehart, one year after her breast cancer diagnosis.

“I’m not leaving to give up. I’m leaving to fight,” Cindi said of her decision.

News of illness has resonated with everyone at APD.

“It was an eye opener,” Dulin added. “When it hits home it makes you think. It’s made us aware this disease does not discriminate.”

Aggressive chemotherapy has tapped her strength and endurance to keep pace at work.

Nevertheless,  Cindi tries to keep pace with household chores between bouts of chemo.

Her husband, Chris, commutes daily to southwest Charlotte for his job. Along with Cindi’s illness, his father has prostate cancer.

“Besides me, he’s got his daddy to look after, too,” Cindi said.

Cindi’s sudden and unexpected departure from work has left the family with one income. Meanwhile, she has to keep her health insurance up-to-date to cover her sickness. That means paying the monthly premiums without the benefit of a salary.

New London First Baptist Church is launching a benefit for Cindi, dubbed Proof Positive Cancer Mission. Proceeds from its barbecue dinner will go toward the recurring costs of her insurance premiums until her disability coverage takes effect.

Cindi and Chris attend Open Door Baptist Church and where Cindi sings in the choir.

During her illness, Cindi relies on her faith for the right resolution.

The Nov. 9 BBQ luncheon starts at 10:30 a.m. – 2 p.m. with lunch delivery or take out. Delivery includes a five plate minimum within a 10-mile radius and a 10 plate minimum for deliveries over 10 miles away.