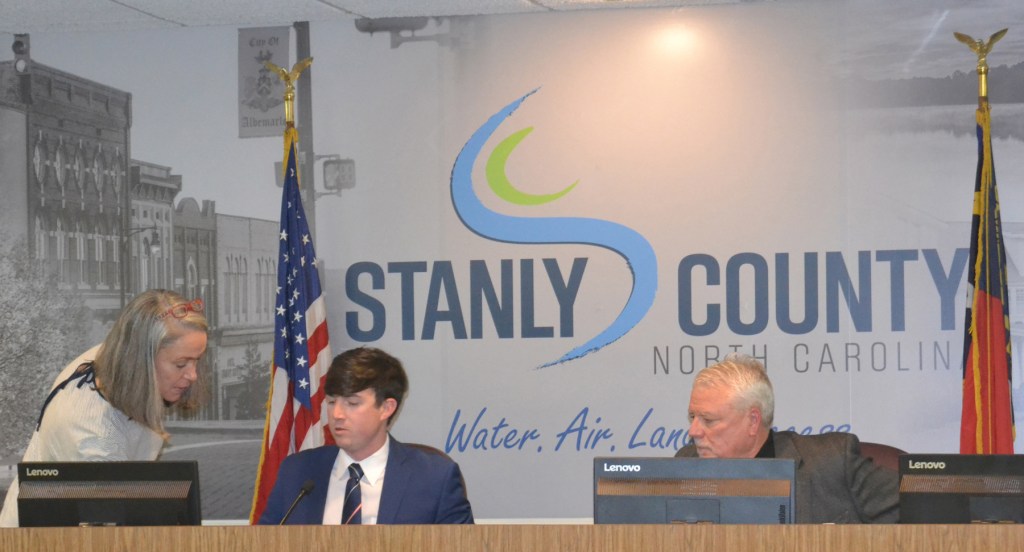 Kathy Almond, chief executive officer and president of the Stanly County Chamber of Commerce, left-right, assists county commissioner candidates Zachary D. Almond and Mike Lambert as they prepare to field questions in Tuesday night's Candidates Forum. Almond, a Republican, and Lambert, a Democrat, are vying for the District 4 seat.

On a night when candidates could separate themselves from political rivals, most held their own while a few demonstrated political promise.

The evening’s most prevailing question, however, pertained to the 1/4-cent sales tax referendum. Virtually every local candidate was asked about their stance on the sales tax, which appears on the ballot for a fifth time.

All of the candidates asked about the 1/4-cent sales tax, or 1 penny for every $4, voiced their support. Proceeds of the tax, about $1.5 million annually, has been designated for public education. Stanly County Schools wants to use the funds to ensure security at its facilities.

“We need to make sure (students) are not hungry and they feel safe,” said Democrat Mike Lambert, candidate for county commission Dist. 4, who works for SCS as transportation director.

“The 1/4-cent sales tax is the most fair form of tax,” Almond said, adding that as commissioner he would ensure the tax would not expire and remain earmarked for school safety.

Almond pointed to such opportunities as the widening of N.C. Highway 49 and N.C. Highway 24-27 as signs Stanly should reap economic benefits from improved transportation and highway access.

“Government is not in the business to create jobs, but to create an effective environment for businesses,” Almond said.

Stanly County is poised for economic opportunities, particularly in the western part of the county, Lambert said.

“Stanly County is in such an excellent position for growth,” he added. “We need to be ready when that happens.”

Much of the county’s expected growth is among retirees and where Stanly already has an aging population, Lambert cautioned.

As for the county’s opioid epidemic, Almond supports faith-based intervention as one of the combative strategies.

Democrat Elaine Coats notched voter points in her quest for an at-large seat on the board of commissioners. After withdrawing as an opponent to GOP incumbent Bill Lawhon in District 2, she instead mounted a write-in campaign against fellow political newcomer Lane Furr.

Because Furr failed to attend the forum due to an illness, Coats seized the moment for political gain.

She, too, offered justification for the sales tax referendum. Dr. Coats, a local pediatrician, said SCS has many needs.

“Our schools are in dire need of being updated and security,” she said. “A tax frees up other funds.”

Coats referred to the county’s poverty rate of 17 percent as another reason students within SCS struggle to keep pace.

“Education is the biggest equalizer,” Coats said. “We have to support our schools and get our kids educated much earlier.”

“We don’t have a young population to work,” she said.

But, she countered its perceived weaknesses with the strength of hope.

“We have a lot more going for us than against us,” Coats said.

Board of Education At-Large

In a setting designed to differentiate candidates, many of the opposing candidates seemed to share similar platforms. Such was the race for the at-large seat on the Board of Education, which pits Democrat Joanne Hesley against Republican Anthony Graves.

Both favored the sales tax.

“If children feel safe at school, and fed, they can learn,” said Graves, borrowing prior sentiments of Lambert and Coats.

They both supported the expansion of pre-K with Graves advocating its availability to all students. Hesley called early education critical to building a child’s confidence.

“Every $1 invested saves taxpayers $13 in costs,” Hesley said of the fiscal dividends of pre-K.

Hesley, a retired teacher and active substitute, talked passionately about the challenges facing SCS, specifically in the area of teacher recruitment and retention.

She, too, talked about the impact of poverty, noting recent school report cards, which showed SCS with six low performing schools, reflecting more about student poverty than academic performance.

Graves called the school system’s greatest challenge as “trust.” In recent years, the district has lost the trust of the public, he added.

“I believe people can make an argument that the school system was poorly managed,” Graves said.

In recent years, the community became divided over the issue of consolidation, which led to the one-year closure of Oakboro Elementary School.

After one year as superintendent, Bill Josey resigned in the wake of unethical conduct.

“Re-establishing trust is the highest priority for our school system,” Graves added.

For a county with more Republican voter registrations, Democrats used the forum to regain political traction.

A question about making judicial races partisan led the two candidates to diverge.

“I think it was a step in the wrong direction,” Webster said, adding she prefers the guarantee a judge has no biases when presiding over a case.

Sasser, on the other hand, acknowledged voters seldom pay any attention to judicial races; therefore, they know little about their backgrounds. An indication of their political leanings, at least, gives voters candidate insight, or “better than no guidance at all,” Sasser added.

Sasser was asked about the constitutional amendment set for the November ballot that reduces the state’s maximum allowable income tax rate from 10 percent to 7 percent.

“I favor the amendment,” Sasser said, adding the reduction will serve as an economic stimulus.

She quickly pointed out the ambiguousness of the proposed Voter ID, which has not been defined by the legislature.

“This is not a blank check I’m willing to write,” Webster said.

She said the issue has more questions than answers, likening it to a several-hour ordeal at the Division of Motor Vehicles for a new license.

“What is Voter ID going to require?” Webster added.

Democrat N.C. House Rep. Ken Goodman, D-Richmond, showed how an experienced incumbent handles a room. However, Republican challenger Joey Davis proved to be a solid adversary. In fact, the two seemingly had more in common than different.

Green Party candidate Justin Miller did not attend the forum.

Goodman and Davis supported the state legislature’s Unfunded Liability Solvency Reserve Act, which established an Employee Benefit Trust Fund to be funded through appropriations by the General Assembly.

Both opposed the constitutional amendment that established an eight-member bipartisan Board of Ethics and Elections Enforcement.

“This is another attempt to strip the governor of authority,” Goodman said, adding that Republicans have reduced Gov. Roy Cooper’s appointments from 1,500 to 300.

“The state needs a strong executive,” he added.

Davis said the elected governor should wield authority. Moreover, he suggested unaffiliated voters deserve a greater voice as well. Davis recommends the make-up of the elections board should be comprised of three Republicans, three Democrats and three Unaffiliated registered voters.

In his final response, Goodman endorsed the Build N.C. Bond Act, which authorizes $300 million annually through 2028 for road construction.

“It speeds up road projects,” said Goodman, who co-sponsored the legislation.

Davis was asked about the effectiveness of a bill that ordered coastal agencies to ignore scientific coastal data regarding sea levels. He defended the bill.

“I don’t think you can predict hurricanes or the weather,” Davis said. “It’s fiscally irresponsible to make policy based on things you don’t know.”