An Albemarle man is behind bars after he allegedly beat his 72-year-old mother with an axe handle before robbing her of cash. 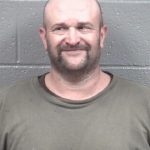 Jamie William Hinson, 47, was arrested Tuesday for the violent assault of Ruth A. Hinson at her Prospect Church Road residence, according to Albemarle police reports.

Around 10 p.m. Monday police responded to CHS-Stanly about an assault.

Ruth Hinson told police her son struck her in the head with the blunt end of an axe handle, knocking her to the ground. He then began strangling her while threatening to kill her, police said.

Jamie Hinson forced his mom into a vehicle and drove to an automated teller machine and where he had her withdraw cash that he then allegedly stole, police said. He then drove to Rowan County where the car ran out of gas, police said.

Ruth Hinson was able to walk away as her son walked in a different direction. She managed to call someone to come pick her up and take her to the hospital, police said.

Jamie Hinson was arrested the following day and charged with felonious robbery with a dangerous weapon, first degree kidnapping, assault with a deadly weapon with intent to kill and inflicting serious injury and identity theft.