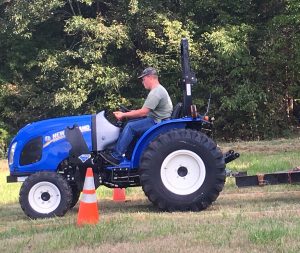 Blake Fraley competes Oct. 1 in tractor driving during a contest among Stanly,Cabarrus and Mecklenburg students.Fraley qualified for the state FFA competition in February 2019. (Contributed)

The federation is comprised of Stanly, Mecklenburg and Cabarrus counties. FFA members from these counties met at the Stanly County Agri-Civic Center to showcase their truck and tractor driving skills.

In tractor driving, students hook up a trailer, drive through a figure eight course and back the trailer down a 50-foot shoot.

As students drive through the course they try to avoid hitting the cones and lines on the course while having the lowest time.

Eudy placed second in the contest and Fraley was first.

Only first place qualifies to compete at the state competition.

Fraley will compete in both truck and tractor driving at the state FFA contest held during the Southern Farm Show in February.