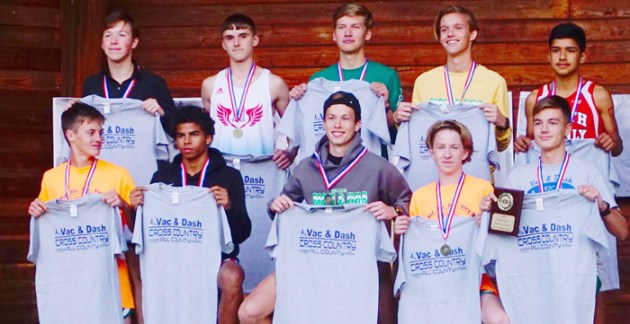 The 2018 Stanly County Schools Cross Country Championships were hosted by West Stanly on Oct. 18 at Oakboro Park. After a week delay due to Hurricane Michael the teams were greeted with their first fall temperatures.

The women opened the show, with the Colts’ top seven runners all racing their way into the top 10.  Teams scores for the women were West Stanly (17), North Stanly (48) and South Stanly (72).

Colt senior Pierson McManus and teammate, freshman Natalie Almond, broke from the pack and the race become a battle between the two top Colts by the one-mile mark. The pair ran tight for most of the race before McManus surged ahead with a half-mile to the finish of the 3.1-mile race.

After racing sick in an the conference meet McManus looked to be back on form as she sprinted to the finish in 21:05, her fastest time in four years on her home course.  McManus was named female cross-country Runner of the Year for the second year in a row.

Almond followed up her RRC individual championship with a county runner-up finish in a fast 21:20. Colt senior Brooklyn Simpson made it a Colt sweep, finishing third while running her fastest course time of 22:34.

The North Stanly Comets have a talented freshman of their own in Lexi Goode. It looked like Goode had fourth place wrapped up, but West senior Maddie Miller lurked just behind. Miller made her move with 400 meters to the finish, gaining with every stride, but the Comet sprinted to the finish, holding Miller off by one second. Goode took fourth place in a personal record 22:39 all-county finish, with Miller at 22:40 for fifth place.

With a mile to go West sophomore Rachel Efird found herself in battle with North senior Taylor Burleson and South Stanly freshman Jacy Noble. Efird was the strongest of the three, running 23:21 for sixth place, with Burleson only 10 seconds back running a season-best 23:31 for seventh. Noble gave the Bulls an All-County runner finishing eighth, running a personal-record 24:00.

Colts freshman Laney McCollum ran 24:15 to finish ninth and was the fourth freshman in the top 10. West junior Katherine Pollard followed up her 10th place all-conference finish with a 10th place All-County finish in 25:10.

North junior Milena Hernandez finished one spot out of the medals in 11th place at 26:22, with Albemarle’s first finisher, junior Kellyn Combs, finishing 12th in 26:59.

The men’s race was a mirror image of the women’s race with the Colts placing seven runners in the top 10, while North Stanly had two all-county finishers and South Stanly one top 10 finisher. West won with a low score of 18, followed by North (51), South (67) and Albemarle (114).

While the team competition may have been decided early the individual crown was up for grabs for most of the 3.1-mile distance as the race became tactical for the top men runners.

Colt junior Korbin McNeill proved to be the strongest runner over the last 800 meters racing to a 18:59 first place and the 2018 male Runner of the Year honors.

West freshman James Shue sprinted in right behind McNeill as runner-up in 19:04. Shue just staved off teammate senior Noah Almond (19:06) and North Stanly’s Koby Poole (19:08). The Comets freshman forced the Colts Almond into a sprint to hold the third spot, with Poole racing to a personal-record time and fourth place.

Colt Austin Huneycutt followed up his All-RRC race with a 19:15 fifth-place All-County performance.

South’s Daniel Vasquez was in the mix throughout the race running a personal-record 19:20 for sixth place. The Colts’ Daniel Brattain ran in the top pack most of the race, finishing seventh in 19:28.

Another close finish came between West junior Nathan Brown and North freshman Nicholas McClure. Brown finished eighth in 19:44 while McClure posted a personal-best 19:45, good for ninth and a spot on the All-County squad.