A chance marriage turns up all cherries 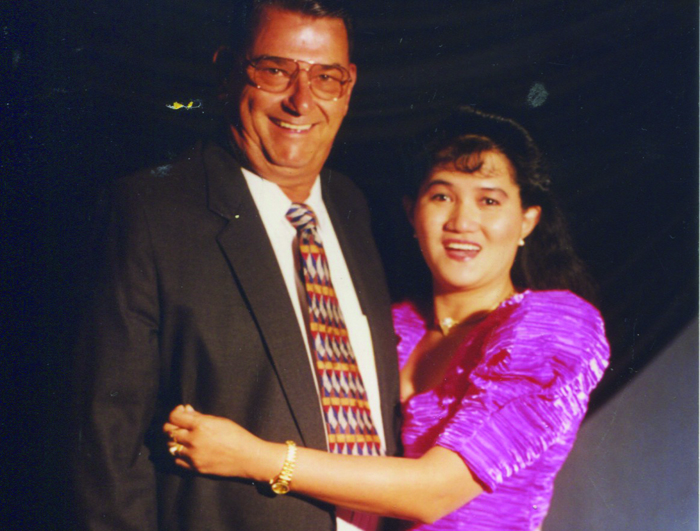 Oscar and wife Cecilia Spence share a moment at a gala shortly after they were married in October 1993. After first meeting through a publication, they recently celebrated their 25th wedding anniversary. (Contributed)

Thursday marked their 25th wedding anniversary. Not only does the Albemarle couple seem to be happy, but their union was anything but a conventional romance.

One day in early 1993, well before the explosion of the internet, Oscar G. Spence randomly picked up an edition of “Cherry Blossoms.” The magazine solicits dating match-ups via pen pals, courtesy of photos. Twice divorced with three sons, Oscar studied the slew of photos of eligible women.

Oscar’s first marriage lasted more than 15 years, the second for seven. He had been divorced for a couple of years when he first perused the magazine.

“I was basically happy and self-sufficient,” said Oscar, then age 54.

Nevertheless, he decided to correspond with some of the women advertised. The first 10 contacts yielded no budding relations.

Then he corresponded with Cecilia Morelos, of the Philippines, and 21 years younger. Albeit through letters, there was a connection between the two that evolved into mutual chemistry.

Meanwhile, Cecilia, then 33 and the mother of a 5-year-old daughter, had other corresponding suitors, too.

One of them claimed to be a doctor from Florida. He frequently talked about everything he owned, but never about himself or his family, which bothered Cecilia.

A Nevada man also wrote, but the frequency of his letters faded.

But with Oscar, the letters were more personable and consistently genuine, much like the couple presently display in their cozy Albemarle home.

Oscar admittedly lacks the suave, gift of gab. Instead, he relies on plain talk, typical of his blue-collar lifestyle.

“I had some of the damnedest phone bills,” Oscar recalled.

“We would not talk long. The man is so frugal,” Cecilia playfully countered to a laughing Oscar. 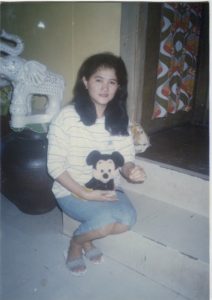 Cecilia Morelos is pictured in her native Philippines prior to meeting and marrying Oscar G. Spence of Albemarle. In this photo, Cecilia was in her early 30s.

They communicated for about seven months as they continued to get to know one another.

When asked about the nature of their conversations, Cecilia offered her recollection.

“I don’t remember. It was all lies anyway,” she said as the couple again laughed hysterically.

Along with chemistry, there was also honesty.

“Lets not kid ourselves, the motivation was for her to come over here (to the U.S.),” Oscar said.

The same was true for many of the advertisements in “Cherry Blossoms.”

“I told him that. I wanted my daughter to have a better life,” Cecilia added. “There were more opportunities in America.”

Unlike many in the Philippines that live impoverished and reside in crude huts, Cecilia’s family was more middle class. They lived in a house and had a convenience store as a family business.

One thing about the Filipino culture, however, is its sense of family, a quality instilled in Cecilia and part of her attraction to Oscar.

“They look after one another more than themselves,” Oscar said.

After seven months of a long-distance relationship, Oscar took three weeks vacation from his job with the N.C. Department of Transportation and traveled to the Philippines to meet Cecilia.

Their first face-to-face interaction escalated into grander plans. Between a waiting period and the search for someone with authority, Cecilia and Oscar exchanged vows of their nuptials.

No ceremony is official without a wedding story, which Oscar enjoys telling.

The judge who married them had no jurisdiction in the location where they were married. So, he performed the ceremony, which occurred on Oct. 24, but refused to sign their marriage license until back in his jurisdiction. That occurred the next day, Oscar explained.

Shortly after they were married, Oscar had to return to the U.S. Because of immigration laws, his bride had to stay behind.

It would be months before the Mrs. Cecilia Spence could join her husband in the U.S.

“We did it the legal way, but it was stressful on us,” Oscar said of the lenghty process.

As she waited to come, Cecilia decided it would be best to leave her daughter Camille behind, at least in the beginning. After all, she would be well taken care of by Cecilia’s family.

“I’m thinking ‘what kind of mother leaves her child behind?’ ” Oscar said.

A friend explained that Cecilia wants to be sure she is entering a safe environment before bringing her child. It’s easier for a woman to flee without a child, the friend explained.

Oscar quickly assured Cecilia that she and her child would be safe.

Even Cecilia’s family could see Oscar posed no threat and encouraged her to take Camille.

Cecilia and Camille finally made it to the U.S. in August 1994, specifically Albemarle where they joined Oscar.

Soon Cecilia landed a job to shoulder her part of the family’s financial responsibilities.

For years she worked second shift while Oscar worked days. Consequently, he shared as much caring for the young Camille as her mother.

Having already adopted Camille, Oscar relished the role of daddy. Now he enjoys being granddaddy to Camille’s toddler.

Cecilia works as a machine operator at Auria, where she has been for 24 years.

At 58 years old, Cecilia continues to work while Oscar, now 79, is retired.

“There are bills, bills, bills. And it’s work, work, work. Now, I want to go home,” Cecilia jests as she and Oscar take turns playing with the baby.

“See what America did to me,” Cecilia joked, comparing herself to a photo taken 25 years earlier.

Regardless of their unconventional courtship and early motivation, Cecilia and Oscar seem happily married.

“Looking back, we know we took a big risk, but it worked out,” Oscar said.

Their marital success comes down to the simplest of reasons.

Along with their wedding anniversary, Oscar said their marriage reflects so much more.

During a time when Americans debate the value of immigration, Oscar points to his wife as one who has steadily worked, paid taxes and contributed to the country she now calls home.

And, of course, there’s the unique story of how they met.

“People talk about mail-order brides, but no one ever knows what happened with them. Ours worked out,” said a smiling Oscar.