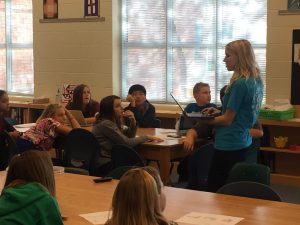 This year’s installment, “Code Your World,” focuses on STEM (science, technology, engineering and mathematics) education and computer science skills through hands-on activities with students and volunteers.

It’s the latest effort from the yearly North Carolina Cooperation Extension 4-H event that has been employed nationwide for 11 years.

According to 4-H Youth Development Extension Agent Kacie Hatley, West Stanly Middle School’s level of student participation — around 45 students — was one of the strongest she has seen with the Code Your World event.

“Every year, National 4-H puts out a different curriculum,” Hatley said. “For example, last year’s was about wearable health monitors and every kid made their own device to track things like heart rate and step count.

“This year, it’s about coding and we have hundreds of thousands of kids doing it nationwide,” Hatley added.

The first of the activities — “Animate a Word” — quickly got the children involved with the help of the block-based coding language Scratch.

“They create a word along with the animation that goes along with it, and then they vote on who has the best animation,” Hatley said. “They have learned to use coding language to make letters spin and change colors. It’s basically a small introduction into the concept of computer coding.”

The “Color Your World” activity involved map coloring and puzzle recognition while “Artificial Intelligence” focused on the use of A.I. in technological business decisions.

“We’re getting them introduced to the idea that this could be a potential job for them one day,” she said. “My favorite part is seeing the kids get really competitive and excited about up-and-coming industries.”

Next October, the 4-H science program will return to schools across the country for its 12th installment and a brand-new theme with activities.