In a farmhouse behind the Porter Baptist Church near Norwood, Ruth Hopkins Wilhoit was born 102 years ago. She died at her home in Albemarle early Sunday morning, Oct. 28.
The youngest of 21 brothers and sisters — who nicknamed her “Cush” because of her easy life as the “baby” — she was the only one of the immediate family of Dock F. Hopkins still alive for the 99th Hopkins reunion this October at the Porter church. She had been at the first reunion as a child and attended all but two of them.
As a young girl, Ruth picked cotton for “a penny a pound,” carried jugs of chilled milk from 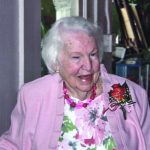 a spring where the family kept it, and was baptized in Jacob’s Creek north of Porter.
Grover Wilhoit, of Albemarle, saw her playing “hop scotch” while visiting relatives in Porter in 1930. He told his sister, “I’m going to marry her some day!” In 1938 they were married, with Grover Wilhoit preceding her in death in 2004.
Ruth and Grover Wilhoit raised their two children in the Wiscassett Mill “village” and both worked at the mill in Albemarle, he on the first shift and she on the second.
Ruth recalled singing old hymns with co-workers as they walked to their homes from the mill at midnight.
During the recent flooding of Little Long Creek near the former mill site, Ruth recalled walking up the railroad tracks several times long ago to avoid the flood waters — always singing.
At her 100th birthday celebration two years ago at Grace Baptist Church, where she was the oldest and longest member, Ruth was asked how she lived to be a hundred. She told the 150 persons there, “It was all those good southern vegetables — but I do like ham!”
And she was very proud of a centennial birthday card from Governor Pat McCrory and a greeting from the White House with a note from President Barack Obama and First Lady Michelle Obama that said, “We are grateful for your contributions to the American story.”
Ruth was an avid reader of The Stanly News and Press until her death. And she was a member of the history committee of Grace Baptist Church that finished its work earlier this year.
Ruth Hopkins Wilhoit is survived by her daughter, Miriam Cranford, and son-in-law Jack Cranford, of Stanly County; a son, G.C. Wilhoit, of Bloomington, IN. Grandchildren: Robert Cranford, Michelle Cranford Drago (Ron Drago II), Hannah Ruth Wilhoit Boston (Mark Boston) and Peter Wilhoit (Kathy DeStefano). Seven great-grandchildren: Makayla Thompson (Timmy Carter), Isabel & Mara Boston, Ceci & RJ Drago and Ethan & Sophia Wilhoit. And two great-great-grandchildren: Emmerlyn & Wesley Carter.
A memorial service will be held at Stanly Funeral and Cremation Care of Albemarle on Thursday, November 1, 2018 at 2 PM with The Rev. Delane Burris, pastor of Grace Baptist Church, officiating. Burial will follow in the Fairview Memorial Park.
The family is grateful to the compassionate in-home care staff of Alliance Health of Albemarle (Henrietta, Lucrecia, and Donna) and the nurses and staff of Community Home Care of Troy.
Memorial contributions may be made to Grace Baptist Church, 644 Edgemont St., Albemarle, NC 28001.