Tink defies going to the dogs 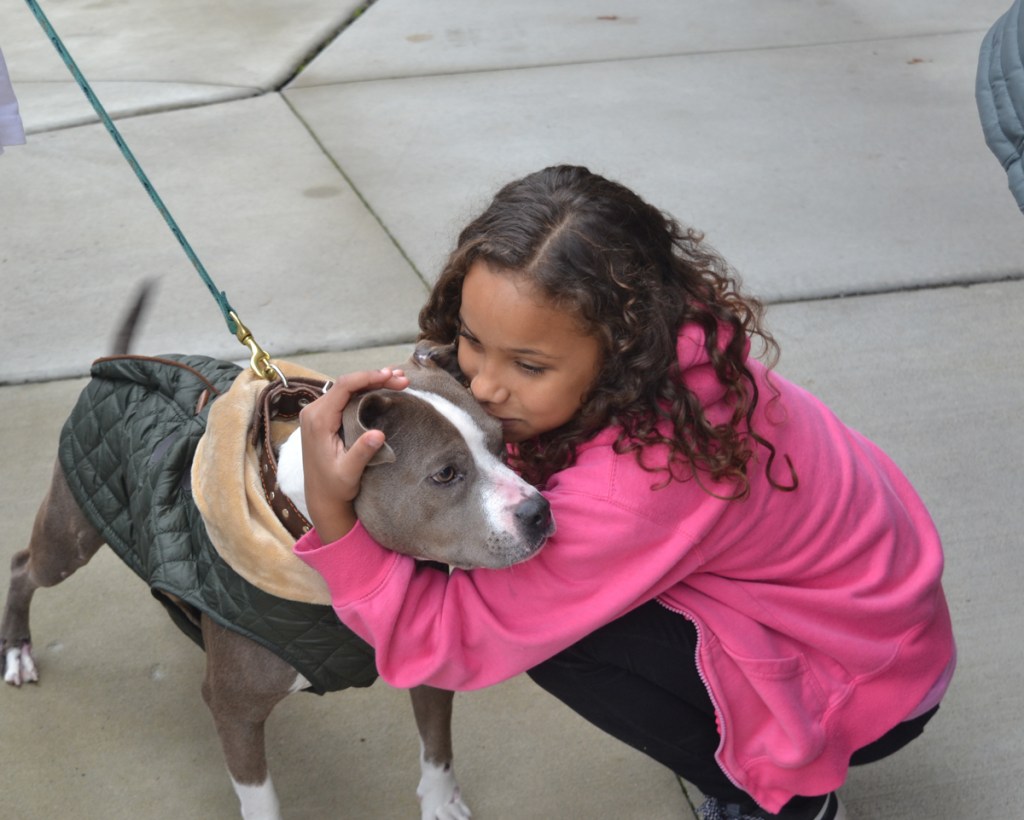 Tyly Watkins, a student at Badin Elementary School, plants a smooch on Tink Saturday outside PetSmart. Friends of Stanly County Animals hosted a fundraiser and pet adoption in honor of Tink.

It could have been a tragic story about another senseless death. Instead, she survived horrific injuries en route to fulfilling a greater purpose.

These days Tink lives a life of comfort not often afforded muscled pit bulls too often left to live and die on the end of a chain. Tink, however, sleeps nights snuggled in a king-sized bed with her head on a pillow.

“She’s spoiled rotten. She lives the life she deserves,” said owner Meagan Davis. “I want her to feel loved.”

Over the course of a year Tink has defied the odds. Last fall Tink suffered a harrowing ordeal after being dragged along a Stanly County road tethered behind a pickup truck. Between dangling by the neck and bouncing on the road, Tink suffered brutal injuries, specifically to her hind quarters.

The driver finally pulled over and discarded the injured dog. A witness found the gravely wounded Tink lying in a field apparently left to die. If not for the dog raising her head, the passing witness would not have found her.

Five hours later, volunteers wrapped her in a “Tinker Bell” themed blanket, thus her nickname, and carried her for emergency treatment. 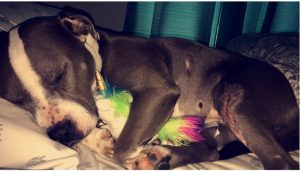 Tink enjoys the comfort of home while sleeping the bed. The scars of Tink’s injuries from one year ago are a physical reminder of being dragged from behind a pickup truck.

Tink was transferred among veterinary facilities before finally admitted at Carolina Veterinary Specialists in Charlotte because of the severity of her wounds. There they vowed to “fix” her.

Tink’s story spread like a wildfire, opening hearts and wallets along the way. Suddenly Tink’s story became larger than survival.

“Little did we know, that was the beginning of a journey that would end up changing so many lives,” said Lori Talbert, president of Friends of Stanly County Animals. “We gained many followers from her story. Everyone simply jumped in to help in whatever way they could.”

On the night Tink was brought into the Charlotte facility, Davis, a veterinarian technician at the office, came face to face with Tink.

“She had this incredible look in her eyes,” Davis said. “You can tell when a dog wants to fight to live.”

Davis vowed she, too, would stay the course if Tink did her part.

Hospitalized for two months, Tink kept her end of the bargain as she improved daily. Next came time for Davis to honor her commitment.

“I wasn’t looking for a dog,” she said. “I felt like God placed her in front of me. I’ve never felt that kind of connection for a dog before.”

In talking with co-workers, Davis said they decided 3-year-old Tink had a much bigger calling than simply surviving abusive injuries.

“There’s got to be a purpose for her,” Davis recalled.

She then reached out to Invisible Paw Prints, an organization that trains therapy dogs. Their canine companions provide heartwarming visits to hospitals and nursing homes and where they share a bottomless capacity for love and hope.

“I have no doubt she was meant to be a therapy dog,” Davis recalled the group informing her.

Tink completed therapy dog training in April. She is especially sensitive to the needs of children.

“She connects more with kids,” Davis said. “She just knows they need love.”

Nowhere was Tink’s affection for children more on display than outside the doors of PetSmart in Albemarle Saturday. As part of a homecoming of sorts, Tink greeted visitors as Friends of Stanly County Animals held a fundraiser and adoption fest. 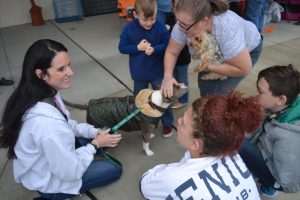 Meagan Davis, left, new owner of Tink, talks with supporters Saturday as they shower her rescued pit bull with attention.

No dog has been a more powerful resource than Tink. Along her complicated journey, Tink became a social media celebrity. She’s the unofficial fundraising mascot for Friends.

“She has been a blessing in so many ways to so many people,” Talbert said. “Rescue is definitely hard. However, when you’re a part of something like this, it gives your heart a feeling nothing in this world can match.”

Tink’s gentle and giving disposition in a fireplug of a body is also helping change the perception of pit bulls.

“I hate that they get a bad rap,” Davis said. “People have this image that pit bulls are mean. I want people to know that all pit bulls are not bad.”

Several pit pulls were among the dogs on hand Saturday awaiting adoption or fostering. Their tails wagged incessantly between the sniffing and licking of hands.

“We are always looking for transporters, fosters and donors. One person can make a difference,” Talbert added.

Everyone that stopped by had to spend time with Tink.

One child became emotional during his reunion with Tink. It was then learned that Tink was once part of his family prior to the dragging.

Davis had earlier encountered another woman who claimed to have once owned Tink prior to her ordeal.

It’s clear now with whom Tink belongs, when she’s not sharing her affection.

“Her spirits never wavered, her courage and strength only grew stronger and somehow, with what all she’s been through her heart remained loyal and loving,” Davis said of Tink. “I think we all could learn something from this sweet girl. I know I personally have. They say we rescue dogs, but for me – she rescued me.”

If you want to volunteer, adopt, foster or make a tax-deductible donation in honor of Tink, visit friendsofstanlycountyanimals.com for details or send a check to Friends of Stanly County Animals, 1803 Arbor Way, Albemarle, NC 28001.