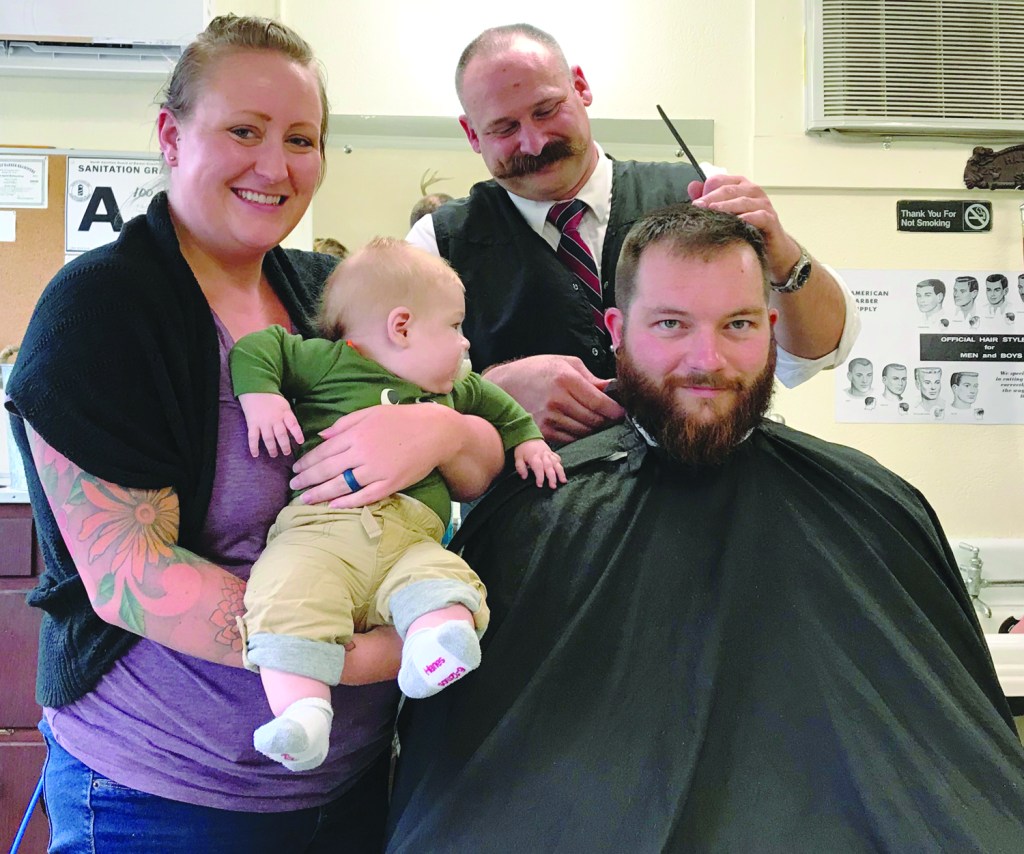 Photo by TOBY THORPE Caulder England, held by mother Kira, watches as his father Casey receives a haircut from Steve Grissom. The barber celebrated with a grand opening at his Set Apart Barbershop in Stanfield Oct. 27.

Steve Grissom traveled the scenic route on his way to Stanfield.

Born and raised in Alaska, he has lived in North Carolina since 1988. He has worked as a meat cutter and an arborist, and eventually decided to attend barber school in Wilmington.

And after working as a barber for a year and a half in Locust, he was making plans to start a mobile barber service when the opportunity to open his own shop came about somewhat unexpectedly.

“The Lord dropped this in my lap,” he said.

Grissom is the owner and operator of Set Apart Barber Shop in downtown Stanfield, which celebrated its grand opening on Oct. 27.

The shop, according to its owner, is Stanly County’s oldest active barber shop, having originally opened in 1958 as Stanly Barber Shop. In recent years, however, the shop had closed, and Stanfield businessman Randy Drye (who operates Trophy Heaven directly across the street) took an interest in finding a tenant for the shop.

“Randy came up to Locust on a recruiting trip,” said Grissom. “And after talking with him, with other barber friends, and spending some time in prayer about it, I decided to make the move.”

The name of the shop reflects the faith and beliefs of its owner.

“We are a Christian business,” he said. “And as Christians, we are to be ‘set apart’ in everything, including business.”

The outlook for the new shop seems excellent, based on early observations, Grissom says.

“We did a soft opening a week ago, and used that time to iron out some rough spots, but now we are ready to go.”

By 11:30 a.m. on this grand opening day, Grissom said he had already lost count of the number of haircuts he had given. He also expressed encouragement from the welcome he has received from the community.

“We have received a great reception from community leaders and residents,” he said, “and we hope to bring in some new customers as well as some of my past clients.”

Multi-tasking is a must for barbers, and as Grissom related the story of the new shop he clipped, snipped and combed the hair of customer Casey England.

England, who brought along his wife Kira and son Caulder, is one of Steve’s regular customers. The couple is also developing a future hair-care client for Grissom in 4-and-a-half-month-old Caulder, whose mane is not quite ready to trim yet.

“He hasn’t had his first haircut yet, but when he does, Steve will be the one to give it to him,” said Kira.