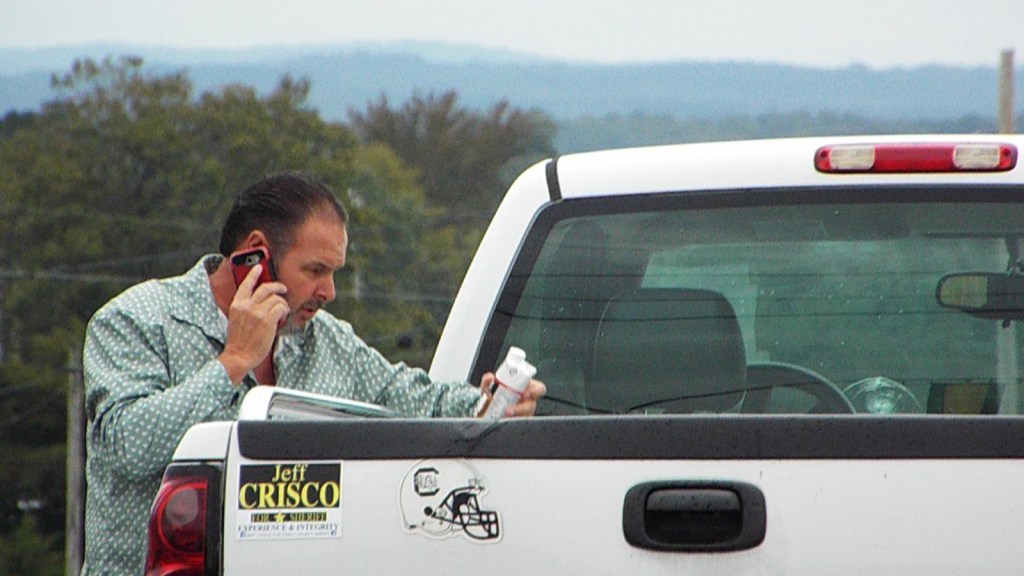 A clip of a video taken Oct. 17 along N.C. Highway 24/27 appears to show Rick Williams, a Stanfield councilman and chairman of the Stanly County Economic Development Commission, holding a can of spray paint when stopping at a campaign sign. During the stop Williams reportedly identified himself as an agent with the N.C. State Bureau of Investigation.

An unconventional political sign has led to accusations of misconduct, including an SBI probe of a Stanfield councilman and chairman of Stanly County’s Economic Development Commission.

Typically campaign signs promote a candidate in a specific race. Local voters, however, have observed roadside signs that condemn Thai Vang, a judicial candidate for District Court, 20A, Seat No. 3. 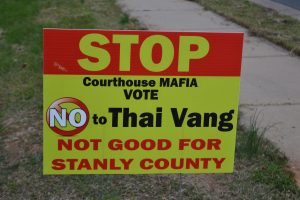 Anti-Thai Vang campaign signs, like the one above located on the roadside in Locust, have fueled political controversy. Terry Pennington, owner of the signs, said about 15 of the 50 signs have been stolen.

Only the signs denouncing Vang’s candidacy have nothing to do with his judicial opponent, Beverly Spencer. Instead the signs were purchased and erected by Terry W. Pennington, a pending defendant in a misdemeanor assault case and who has a past experience with Vang in his capacity as an assistant district attorney.

Pennington’s history with Vang prompted him to erect signs in the vicinity of other campaign signs, including Vang’s.

Vang supporters, however, have taken it upon themselves to remove the signs. After about 15 of the 50 signs were stolen, Pennington opted to stake out sites where the signs were placed.

During one of the surveillances along N.C. Highway 24-27, Pennington and his wife observed Rick Williams, a Stanfield councilman and chairman of the county’s EDC, stop at one of the sites armed with a can of spray paint, the Penningtons said. They also videotaped the incident.

When Pennington confronted Williams and asked his name, Williams reportedly identified himself as an agent with the N.C. State Bureau of Investigation, the Penningtons said.

Williams denied making the remark and possessing any spray paint.

“I know I didn’t do anything wrong. I wasn’t going to have a confrontation with anyone with a sidearm on,” said Williams, referring to the handgun Pennington holsters on his hip.

Williams said he had stopped to take photos of the sign and forward to Vang.

He acknowledged that an agent with the SBI has since interviewed him about the incident.

Special Agent in Charge Audria Bridges also confirmed the investigation, but declined to comment on any specifics due to the ongoing probe.

Also on the same day, the Penningtons observed and videotaped Sandra Lorch Jordan taking two signs and placing them in her car before driving to her Oakboro home. The Penningtons followed her while calling 911 about the theft.

Once deputies arrived at Jordan’s Hazard Road residence, Jordan was videotaped outside on a cellphone that she then handed to one of the deputies.

A deputy then approached the Penningtons and said he was advised by the DA’s office not to charge Jordan with theft, although she had possession of the signs. Instead, they were instructed to charge Pennington with possession of a firearm by a felon.

Only Pennington was not wearing his firearm. He also denies being a convicted felon. He was not charged.

Efforts to interview Jordan at her home Thursday were denied. Sherrill Jordan referred comments come from “the courthouse.” He declined to identify anyone specifically at the courthouse.

As for deputies not charging Jordan for the theft, Sheriff George T. Burris said no crime had been committed because the signs are not legitimate campaign signs.

Stanly County Board of Elections Director Kimberly Blackwelder disputes Burris’ conclusion. She said Pennington has a legal right to post the sign, which is deemed a campaign sign.

“There are no laws which regulate the content of campaign signs, nor restrictions on posting them,” Blackwelder said. “Signs can be posted by candidates, groups, individuals, etc.  There are reporting requirements for the expenditures which vary for individuals, PACs (political action committees), etc.”

Burris, however, acknowledged theft of a campaign sign constitutes a Class 3 misdemeanor. 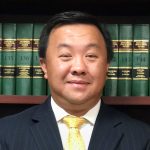 “I don’t think they’re valid campaign signs,” Vang said. “He’s implying that I’m part of criminal activity with the reference to ‘courthouse mafia,’ which I am not.”

But Blackwelder insists the signs meet the state’s criteria. As for whether the signs are libelous, she said “that’s a matter for the courts.”

The “courthouse mafia” component of the sign was borrowed from a past quib by N.C. Rep Justin Burr, R-Stanly. Burr previously used the phrase when describing local justice led then by mostly Democrats.

Pennington’s attack, however, is aimed at a courthouse dominated by Republicans. In fact, several elected GOP officials working in the courthouse have endorsed Vang as their preferred judicial candidate.

Pennington’s anti-Vang motivation appears linked to what he deems as unfair prosecution.

On Nov. 13, 2017, Pennington was charged with assault inflicting serious injury and communicating threats. Those charges were later dismissed by the District Attorney’s Office, but later reinstated, again as misdemeanor charges.

On Aug. 24 Pennington filed an official complaint with the N.C. State Bar about Goodenow’s actions. As for Vang, Pennington has been trying to derail the prosecutor’s candidacy for a judgeship.

“They’re not going to break me. That’s why they hate me,” Pennington said.

Because of pending charges, Vang is prohibited from discussing the case.

“I’m having to defend myself with both hands tied behind my back,” Vang said.

His history with Vang goes back in further.

Several years ago Pennington exchanged gunfire with three men that came to his Austin Road home to attack him. During the gunfire Pennington managed to shoot one of the men in the face with a shotgun.

Pennington was charged with assault with a deadly weapon with intent to kill. He said Vang attempted to get him to plead guilty to a lesser charge that included prison time.

“I told him ‘no jury would convict me for defending myself,’ ” Pennington said. “They came to my house and shot at me 13 times. Why didn’t they charge them? They didn’t spend one night in jail after coming to my house and trying to murder me.”

Pennington wants voters to know how he was treated by Vang.

“If the truth doesn’t come out, it’s going to continue,” Pennington said of unfair prosecution.

A Stanly County criminal records check reveals several past charges against Pennington; however, there are no felonious convictions. Most of the charges were dismissed. On April 30, 2013, Pennington was convicted of assault and battery, a misdemeanor.

After going before a magistrate, a subpoena was issued Oct 18 for Sandra Jordan about the theft of the campaign signs.

Whether any criminal charges arise from the recent incidents rest with District Attorney Lynn Clodfelter, Vang’s supervisor and supporter of his candidacy.

“I know the case agent is conferring with DA Clodfelter on the matter so any decision would come from that office,” Bridges said via email. “The SBI must follow the rule of law, which is to brief the seated DA on the matter for a decision.  There have been times past where cases even in this early stage have been referred to the Attorney General’s office or the Conference of DA’s for a decision, that is solely DA Clodfelter’s decision.”

Efforts to reach Clodfelter were unsuccessful, since he was out of town Thursday and Friday.

Meanwhile, Spencer said Vang’s campaign erroneously blamed her for Pennington’s signs. Spencer said she neither knows Pennington nor about his angst toward Vang.

“I made a promise to the Republican Party and to the people of Stanly and Montgomery counties, to run a clean race based on my credentials, experience, and what I feel I can bring to the bench for the children and families of my new district,” she said.  “My team and I have kept that promise.”