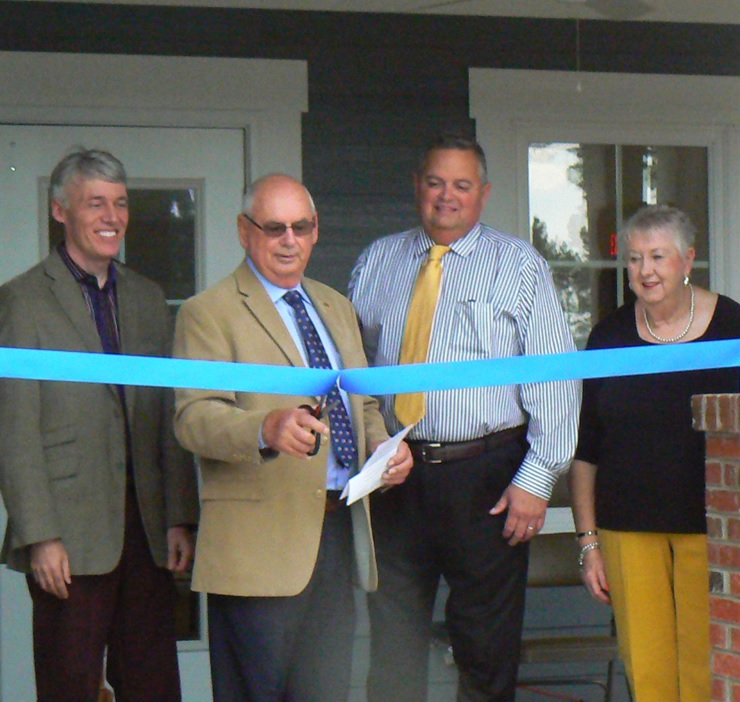 By Shelia R. Simpson, for the SNAP

The town of Oakboro opened its new community building at Oakboro District Park in a dedication ceremony Oct. 20.

After welcoming those in attendance, Mayor Doug Burgess asked everyone to come to attention for the presentation of the colors by the JROTC Color Guard unit from West Stanly High School. The crowd continued to remain at attention while Sonya Young sang the national anthem.

Burgess expressed his pride in the structure.

“This building is the culmination of a dream 20 years in the making,” he said.

He then introduced Mike Efird, parks and recreation commissioner, who took the opportunity to thank each of the individuals who played a role in the project.

After admitting to finding it difficult as a contractor himself to compliment another contractor’s work, he said, “I think they did a fantastic job.”

Efird continued, saying he hoped the facility would be “a focal point” of the community “for years to come.”

As he prepared to introduce Larry Branch, special projects manager, Efird took special care to point out the funding Branch brought to the project. To those assembled, he said, “Because of Larry’s efforts, I am proud to report that this building is presented to you today debt-free.”

Efird then asked Branch to speak more directly about the project, its development and funding.

In providing an overview of the park project, Branch explained that the community building was the final piece of a project that encompassed five phases and 20 years.

He outlined each phase, the projects completed during each phase and the funding required for them.

As Branch concluded, he stated, “I enjoyed working with the town and look forward to seeing it grow.”

Burgess returned to the podium to recognize Kyle Smith of the Parks and Recreation Trust Fund before introducing Terry Smith of Terry L. Smith Construction.

Smith thanked the Board of Commissioners for the opportunity to work with them and concluded by saying, “ya’ll have something to really be proud of.”

Oakboro Board of Commissioners Joyce Little, Chris Huneycutt, Mike Efird and Georgia Harvey then joined Burgess for the ribbon cutting, which was followed by a prayer of dedication from the Rev. Jonathan Waits of First Baptist Church of Oakboro.

The public was then invited to tour the facility and enjoy refreshments prepared and provided by the West Stanly High School Family Consumer Science Foods class.

At nearly 5,000 square feet, the facility has wi-fi, three meeting rooms, a warming kitchen and a large space with a stage for performances, as well as a deck that runs the length of the building and overlooks the park’s pond.

It will be available to rent for weddings, receptions, family reunions, parties and other events.

During the day, the activity rooms will be free to the public.

Shelia R. Simpson is a freelance contributor for The Stanly News & Press.