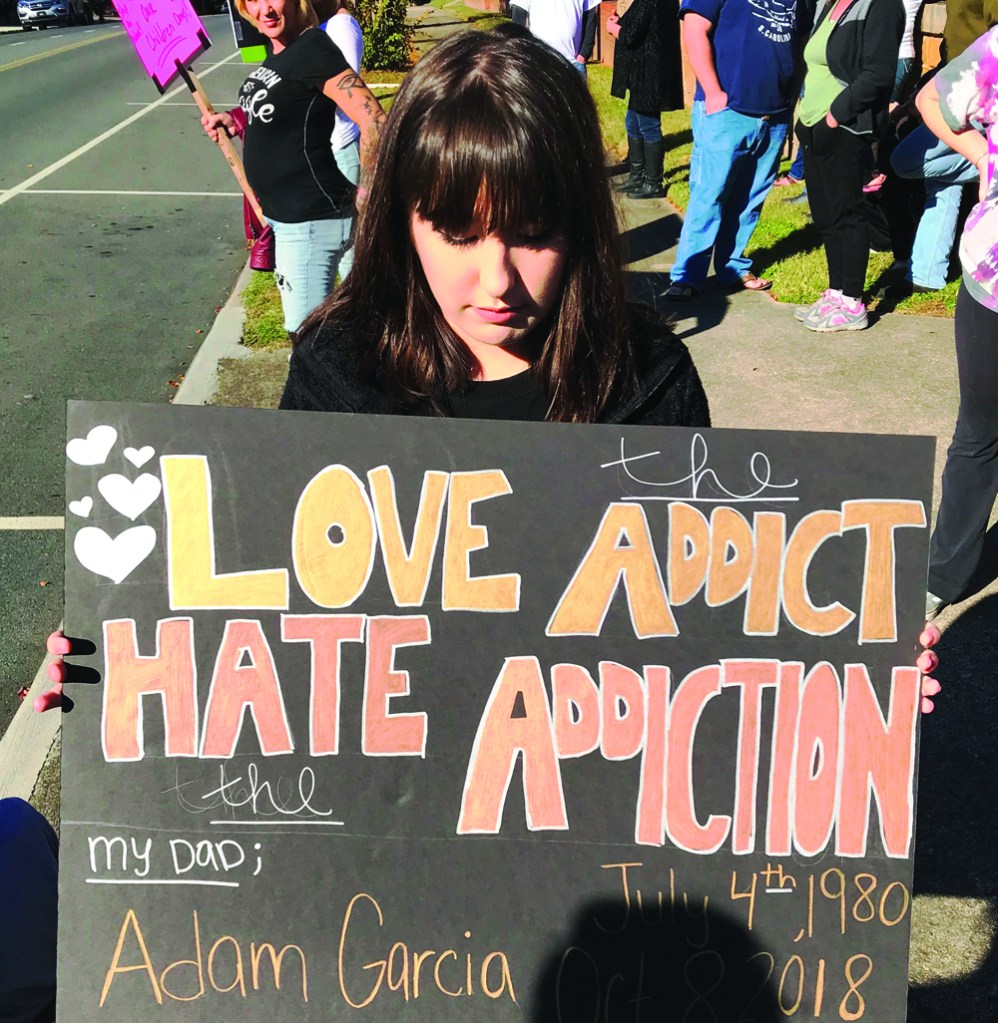 Photo by TOBY THORPE Giana Garcia holds a sign in memory of her father, Adam, who passed away due to overdose in October.

When a team, town or community can say, “We’re number one!” the boast usually goes along with pride and cheers.

But when that “number one” refers to drug overdoses, pride becomes sorrow, and cheers become tears.

That’s what Steven Lowery experienced when he lost his brother, Ryan, to an overdose on Oct. 21.

It led him to reach out to others who have been touched by this crisis in an effort to make the citizens of Stanly County aware of the abuse of drugs, particularly opioids, that is sweeping through what many consider a “Mayberry-type community.”

So on Saturday, a group of around 45 citizens of all ages, ethnicities and backgrounds gathered at the Stanly County Family YMCA Park and marched the three blocks to downtown Albemarle, where for three hours the group conducted a peaceful silent demonstration.

“This will be a silent march in honor and memory of those who cannot speak,” said Lowery, a lifelong resident of Stanly County. “We want to raise awareness of this crisis, and what it is doing to individuals and families.”

Many marchers hoisted signs with statements such as “Bust the Seller, Not the Buyer,” “Stop the OD Epidemic” and “Love the Addict, Hate the Addiction,” while others supported the cause through their quiet presence.

Giana Garcia marched in memory of her father, Adam, who died of an overdose on Oct. 8. Along with her walked her mother, Rebecca Garcia-Phillips.

“We hope this will show that we support harsher penalties for dealers,” said Garcia-Phillips. “Drugs are not just a back-alley thing anymore … they’re everywhere.”
“And we need to make sure that users get help,” said Giana Garcia, “not just sent to jail.” 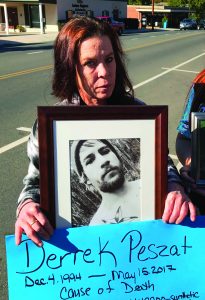 Photo by TOBY THORPE
Christine Jessogne holds a photo of her son Derrek, who passed away due to overdose in November 2017.

Christine Jessogne carried a sign and picture of her son, Derrek Peszat, who succumbed to fentanyl (synthetic cocaine) overdose in May 2017.

“It took over 11 months before we were informed of the type of drug that caused Derrek’s death,” said Jessogne. “People just don’t realize the dangers of these substances.”

In addition to raising awareness, Lowery hopes the event will lead to a more unified effort within the community toward eradication of illegal drug sales and usage.

“We want to bring the community together; to show there is hope through getting everyone involved,” he said. “This event shows that there are people here who are willing to stand up and make a difference.”

John Lowery, the father of Steven and Ryan, summarized the severity of the problem by simply asking others to look around them.

“We have got to raise awareness of how bad this problem is,” he said, indicating the size of the crowd gathered. “You can see how many here have someone (family or friend) who has died from it.”