An Albemarle police officer remains inactive and under observation after he recovers from a medical event that caused him to crash his cruiser while on duty. 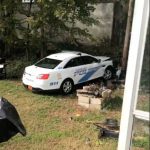 Michael Couick, 45, crashed his 2016 Ford cruiser on the morning of Nov. 1 while on patrol behind Rosebriar Restaurant. He was driving on a gravel driveway near Carolina Avenue when a medical situation caused Couick to accelerate and crash his patrol car into a woodpile and pole, according to Maj. Jesse Huneycutt, assistant police chief.

Couick was taken to Carolinas Healthcare System – Stanly where he was kept overnight for treatment and released the following day, Huneycutt said.

Couick has been with Albemarle police since 2014.