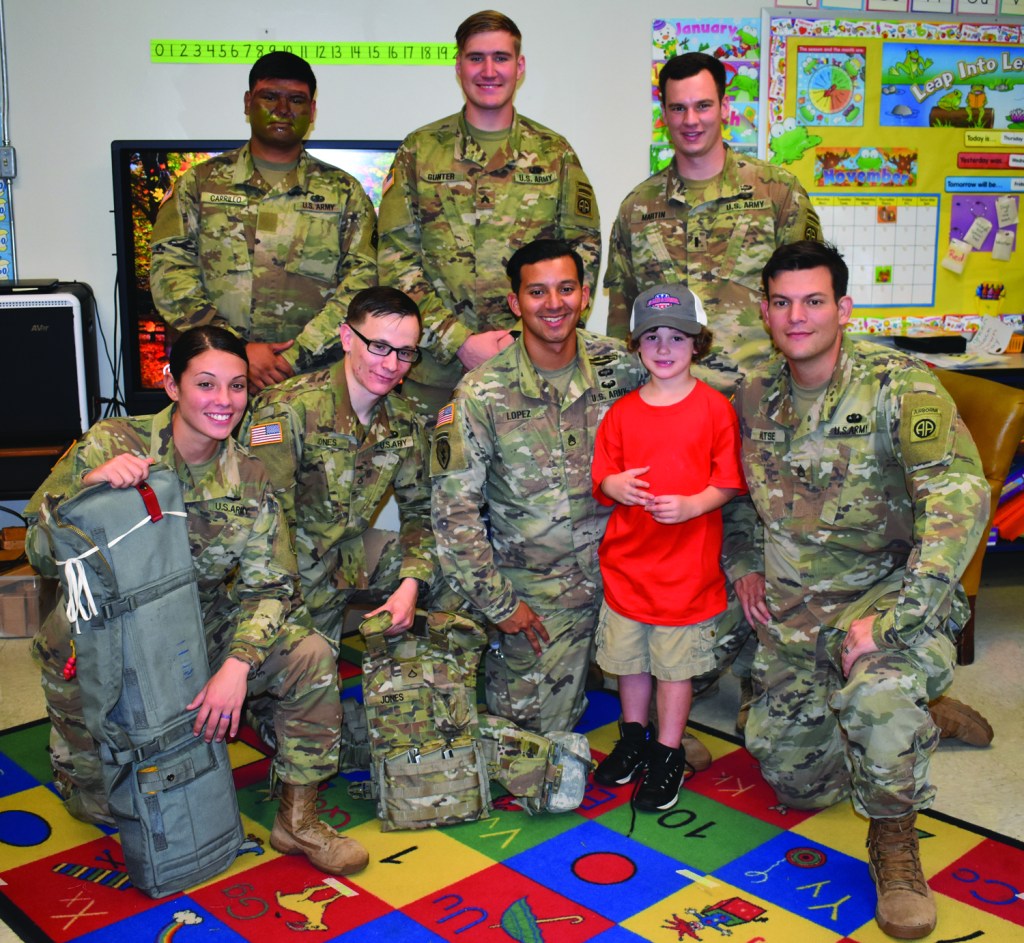 “Friday is ‘Red Day’ at Badin Elementary School,” so said Misti Eudy at the front desk — you could tell from the red streaks in her hair and the crayon-box-red nails, lipstick and sweater. Even so, it felt a lot like Red, White and Blue Day, or even Camo Day.

No matter the apparel, kindergarten, first grade and second grade classes all filed into the school auditorium in anticipation of their Veterans Day celebration. One child paused in the aisle long enough to say, “My uncle’s a soldier.”

Keely Towne has a personal interest in honoring soldiers — her father was in the Army. This is the second year she has invited soldiers from Fort Bragg to visit the school.

“I am thankful that my school supported me in planning this event with Valor & Honor Outdoors (VHO) and the 82nd Airborne,” said Towne.

Last year, 70 students squeezed into her classroom to present a program of appreciation, but this year the event was moved to the larger space so more students could participate in honoring the soldiers.

Seven members of the Army’s 505th Parachute Infantry Regiment, 82nd Airborne Division, were escorted the 90 miles from Fayetteville to Badin by a former Marine, John Perez of Valor and Honor Outdoors, a Burlington faith-based nonprofit organization.

Towne connected with VHO volunteers in her desire to reach out to active-duty service members and veterans.

The school celebration began with a stage loaded with first grade students leading their schoolmates and visiting soldiers in the Pledge of Allegiance.

Afterward, the eight children in Maryfrances Blevins’ and Phyllis Bowman’s classes bravely sang a patriotic ballad, “This Is America to Me.”

Next, 88 second graders recited a Veterans Day poem about “Soldiers young and soldiers old, (who) fought for freedom, brave and bold.”

The visitors from Ft. Bragg were then serenaded by the kindergarten classes recalling all those who “traveled far to keep us safe at home.”

In response, the soldier in charge, Lt. Martin, told the assembled children that his group had traveled to Badin from two hours east. He was all smiles.

“It’s not every day we get to do something like this,” Martin said.

By way of explanation about what they train to do, he said, “We are able to jump into any country in the world from an airplane to protect you, and today we are pleased to actually see a community that we serve and protect.” 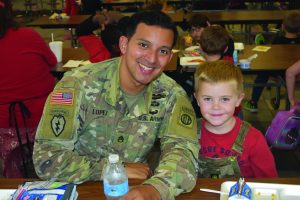 Two Badin siblings have a parent deployed in a foreign country.

Second grader Gage Plumley was given the opportunity to don some paratrooper gear — a vest full of pockets plus a set of headphones. His younger brother Foster was reticent to take the stage, but later, Towne said Foster had a great time hanging out with the soldiers In the classroom.

Those two youngsters represent area military families who live somewhere other than on large bases in eastern North Carolina. In fact, Badin has it’s own neighboring military community, mostly tucked away at the Stanly County Airport — part of the 145th Airlift Wing.

Split between Charlotte and Stanly County, it’s the only Air National Guard unit in the state. According to its website, between 2001 and 2017 “the unit has deployed 4,275 personnel in support of the Global War on Terrorism.”

The 2017 Economic Impact Statement for the NC Air National Guard amounts to $104.3 million — a large chunk of change, perhaps symbolized by something large in the skies above Badin.

Anyone playing on Badin Elementary’s playground or sitting on a front porch may hear a roar and feel a rumble of a C-17 Globemaster III before they spot the colossal gravity-defying ark on its flight-path to the Stanly County Airport, a scant three miles away.

Local men and women of the armed forces shoulder a personal cost for their service — frequent household relocation, even separation from their families and the ever-present likelihood of sudden deployment to danger zones. And in more and more instances there are physical, emotional and mental wounds that come from the experience of warfare.

From its 2016 founding, VHO has expanded into at least 10 states and by the end of this year it expects to serve nearly 400 service members and their families.

According to the website, www.valorandhonoroutdoors.com, this May in Badin VHO honored a group of 17 soldiers and one Marine. Host boaters and Badin Volunteer Fire Department facilitated the day of fishing at Badin Lake.

The organization has a continuing need for hunting land and seeks acreage to lease or use at no cost. It also welcomes donations for the cost of lodging and food which VHO provides for participants.

A special donation was made to the visitors from Ft. Bragg by the Badin classes. Kindergarten through third grade students created 380 greeting cards to be distributed by the paratroopers to veterans.

“The students are thrilled that their cards will be delivered to the veterans that have kept us safe,” Towne said. “I think that it is great for the soldiers to feel the love and support from the community. It is great that we can help strengthen the connection between the youth and soldiers.”