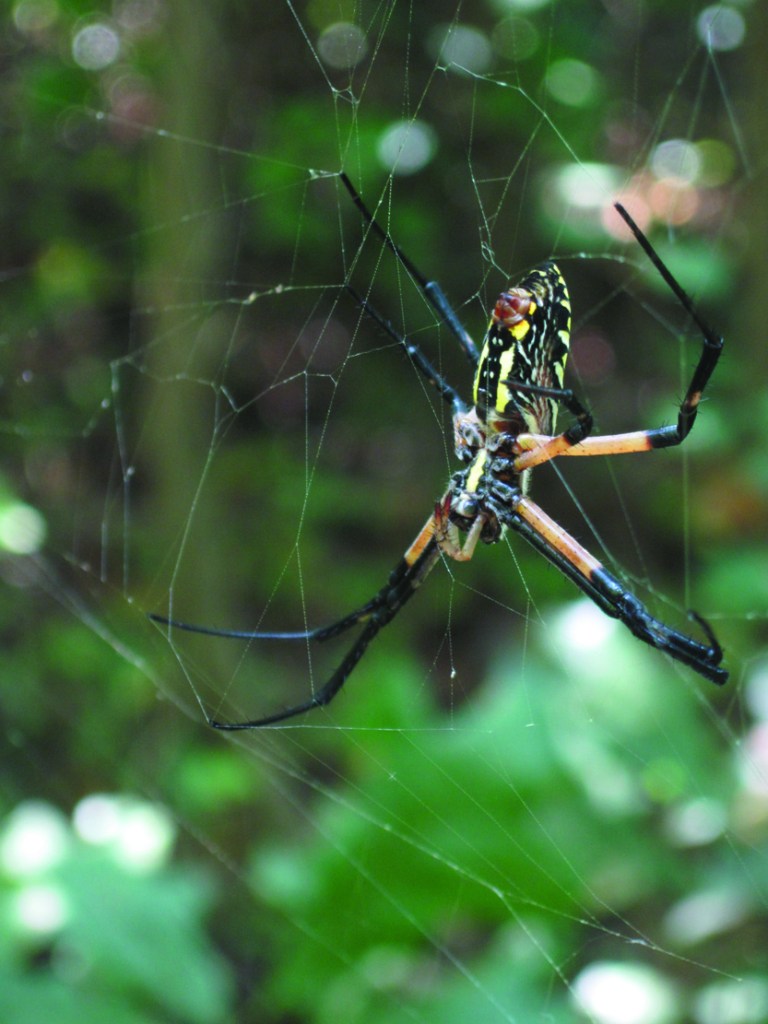 Photo by CRYSTAL COCKMAN Garden spiders spin a circular web. Although many people are afraid of spiders, they can be beneficial, says Crystal Cockman.

I’ve been out in the woods with people who have screamed and ran in the opposite direction when they saw a snake.

I’ve also been in the field with people who similarly let out a yell and start wildly waving their arms when they encounter a spider.

Crystal Cockman writes a column for The SNAP through the Three Rivers Land Trust.

Many people have a natural fear of spiders, but they aren’t all as scary as they seem. In fact, most spiders eat and control populations of various insects, which is actually beneficial to us.

Garden spiders (Argiope aurantia), which may also be called yellow garden spiders, writing spiders, corn spiders, cross spiders, or zipper spiders, will eat about anything, from mosquitoes and stink bugs and grasshoppers to wasps and bees and moths.

Garden spiders are orbweavers, which simply means that they spin a circular web. Their web has a zig-zag pattern called a stabilimentum. There is some debate on why that pattern is there. It could be to camouflage the spider, to attract prey, to stabilize the web or to warn birds to avoid the web. Only spiders active in daytime construct stabilimenta. The webs of garden spiders may be up to 2 feet in diameter.

At night, the spiders often consume their web and then spin a new one in the morning. When prey is caught in the web, they may oscillate the web back and forth to ensnare the prey more thoroughly.

Their abdomen is black with patches of bright yellow and their legs are orange near the body and black at the tips. The bodies of females grow to an inch in length, while males are considerably smaller. Yellow garden spiders can be found throughout North America and Central America. They are largely found in sunny areas, in fields, and parks, and unsurprisingly, most often in gardens.

Garden spiders do produce venom, but it is relatively harmless to humans who aren’t allergic. A bite from one is compared to a bumblebee sting. They are normally very docile and typically must be provoked to bite. The venom does help them immobilize their prey.

Yellow garden spiders breed once a year. The male will build a web near or in the female’s web and attempt to attract her by plucking strands on her web. The male then dies after mating, and sometimes the female eats the male after they mate.

Females then construct brown papery egg sacs, usually no more than four. The egg sac of one of these spiders may contain more than a thousand eggs. The female guards the eggs until the first hard frost, then she dies.

The spiders hatch in the springtime. In areas where there are cold winters, the eggs hatch in late summer or early autumn, but the hatched spiderlings are dormant and do not leave the egg sack until the following spring. In warmer climates, females may live for several years.

Garden spiders have relatively poor vision, but are sensitive to vibration, so when they feel threatened they may go down off their web onto the ground to hide. These are common and widespread spiders, so they do not have a special conservation status.

But remember, these spiders do more good than harm, so there is no need to fear them. Just appreciate them from a distance if you don’t want an up close encounter.

Crystal Cockman is land protection director for Three Rivers Land Trust, of which Stanly is part.