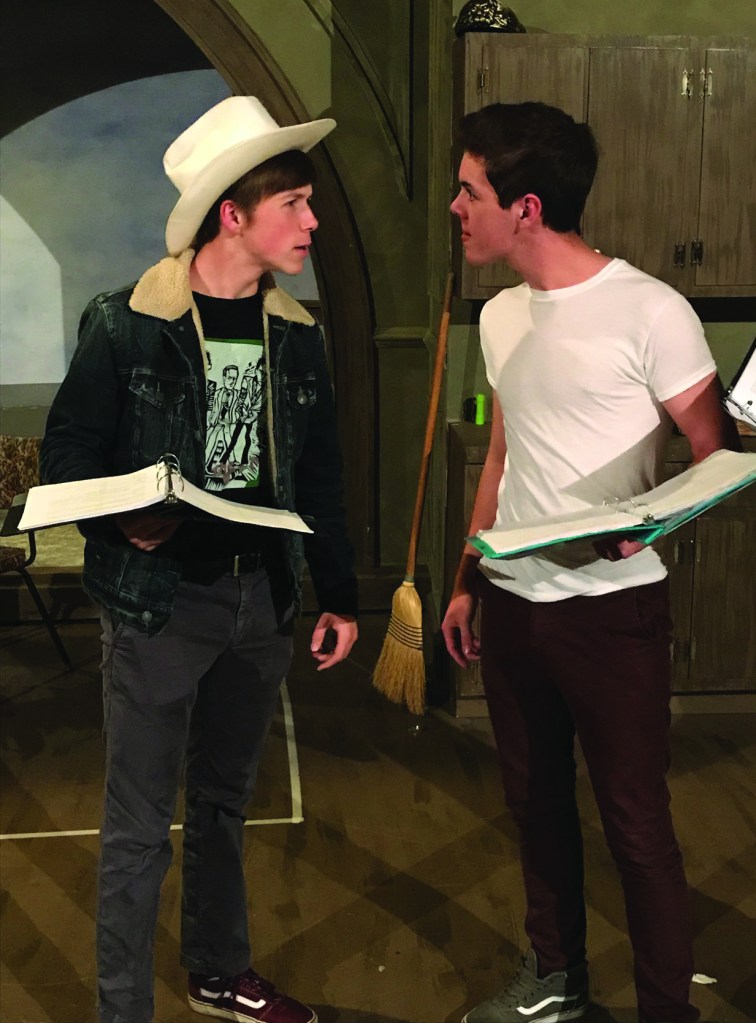 Contributed Logan and the Sheriff (seniors Graham Tucker and Spencer Kilpatrick) square off in a scene from “Country Cruising For Murder.”

Halloween has passed but something scary is cruising into town at the Oakboro Music Hall this month.

In the town known for its monthly cruise-ins, it’s the West Stanly Players who are cruising to another murder mystery dinner theatre on Friday and Nov. 17.

On the menu this year is the audience-interactive comedy/mystery, “Country Cruising for Murder.” Oakboro Music Hall will be transformed into the dining hall of a cruise ship that invites audience to “saddle up” and come on the board for a boot stompin’ country cruise.

“We started producing murder mystery dinner theatres in 2005 and they continue to be one of our most popular production styles,” says long-time WSP director Wes Tucker. “Audiences love the fact that they can escape their daily life, be taken on a journey to some exotic location, and feel like their part of the show without ever leaving Oakboro.”

From the time the audience enters the music hall they are treated as passengers preparing to set sail on the Country Cruise Line.

As the ship prepares to set sail they are introduced to a host of characters and Logan Masters, the cruise director, prepares contestants for the Queen of the Cruise contest and announces a special performance by international country music star Gina Michaels. The audience soon realizes that in addition to chicken and cheesecake, murder is also on the menu, and everyone is a suspect.

“Each time we do a murder mystery we try to find a show that will keep the audience more and more involved,” says Tucker. “This is by far the most interactive and audience-centered show we have ever done, it will have everyone up and moving and rolling in the aisles all night.”

The production features a cast of veteran WSP performers who may or may not be what they seem, including seniors Graham Tucker as cruise director Logan Masters and Spencer Kilpatrick as the mysterious sheriff with the mysterious language. Seniors Hailey Griffin (Betsy), Emily Whitley (Paula), Brittany Sides (Flower) and Jordan Mosely (Toby) all play young contestants who would kill for the title of country cruise queen. Senior Tami Rice and junior Ella Moore play New Jersey mother and daughter duo Myrtle and Edna. Junior Lawson Costner is the thankless assistant Hank and junior Landon Peeler is Bob, the sheriff’s translator.

The evening also features some in-cruise entertainment in the form of a short appetizer “whodunit” titled “Deadly Habit.” This show features younger WSP performers, many in their first production.

The dinner theatre will be at 7 p.m. Friday and Nov. 17 at the Oakboro Music Hall.

Tickets are $25 and include a salad, entrée, dessert and the show.

There will also be a special preview show with no dinner served at 7 p.m. Thursday for $10.

The WSP is also happy to return to the Stanly County Senior Center at 7 p.m. Dec. 7 for an encore presentation.

Tickets for all performances must be reserved in advance.

For ticket information for the Oakboro Music Hall performances call April Tucker at 704-791-3200.