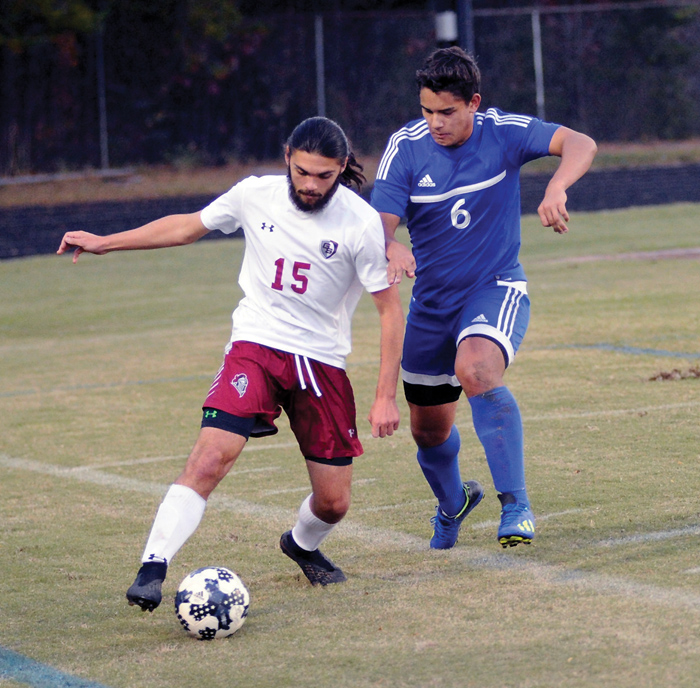 Note: The following story was written by Andy Rhinehart of PolkSports.com. SNAP sports editor Charles Curcio contributed to this story.

After surviving two overtime matchups to reach the state 1A boys soccer quarterfinals, the Knights could not engineer a third such win Saturday evening, falling 3-1 on penalty kicks to Polk County.

The Wolverines (15-10-1) advance to Tuesday’s 1A West Regional final against top seed Community School of Davidson. That game will be played at Mallard Creek High School. It is the first regional final appearance for Polk County since 2007.

The third overtime game in four days for the Knights (16-8-1) stretched the distance, the 80 minutes of regulation and 30 minutes of four overtime periods not enough to determine a winner. That sent the match to penalty kicks as a hearty crowd on both sides roared on a chilly evening in G.M. Tennant Stadium.

Gray Stone’s David Almond opened the shootout with a successful kick, but the Knights’ next effort sailed wide. On Gray Stone’s third try, Polk County senior goalkeeper Jonah Wyatt dove to his right to deflect a low line drive from Knights senior Chase Viscomi, who kept Polk’s defense on its toes throughout the match.

“After the overtime, I was really nervous,” Wyatt said. “It’s the common goalie thought process, I guess. But once I got in, it just turned into a job. I got seriously focused. I could feel the crowd hyping me up and that really helped so much. I just knew I couldn’t let my teammates or my family down.

“When I go to block a PK, I zone in. You can’t think about it or it will be too late. I just trust my reaction time and all these years I’ve been practicing, taking PKs in practice. I’ve been a keeper for a long time, so I just relied on my instincts and it paid off.”

Wyatt also had a key save in each of the five-minute sudden death periods. The senior ended the first five-minute session with a sliding save outside the box just before time ran out. With just over two minutes remaining in the second five-minute period, Gray Stone’s Zack Norman slipped down the right side of the field, behind the Wolverine defense, took a pass and dribbled alone toward Wyatt.

Wyatt held his line for a moment, then charged toward Norman. He blocked his shot — right back to Norman, who took another effort that Wyatt again corralled.

“I was nervous throughout the whole thing, obviously, but I did my job,” Wyatt said. “When he came over I just focused and just had to do what I had to do or else we were going to lose. I just dove in with all my heart and just grabbed it with all I could.”

Polk County took a 1-0 lead late in the first half as Isaac Edwards scored from the left wing in the 34th minute.

The Knights responded midway through the second half as Norman won a race for a bouncing ball in the box and headed it over Wyatt to even the score.

Gray Stone head coach Brad Harrington said of Edwards’ goal “you gotta give some credit, it was a quality finish.”

“It was a very nice set-piece goal,” Harrington said.

The Knights’ head coach also said he felt the longer the game went on, Gray Stone was “creating all the chances and would be the only team to score. Unfortunately, our guys just couldn’t put the ball in the back of the net.”

Harrington also said he was impressed by Wyatt’s play in goal for the Wolverines, adding “you hate to see an opposing player have such a big impact on the game when it’s against your team.”

He also added his team “left all they had out there on the field.”

Regarding the season, Harrington said before the Albemarle game in the first round he told his team he felt they “were on the verge of something special, but we had to go out there and prove it, to earn everything.”

Gray Stone’s head coach said he loved his players on the team and he would “go to battle with those guys anywhere … we are a big family and you hate to see your family members sad after such a tough loss. We had a special year and are already looking forward to coming back strong and better next season.”