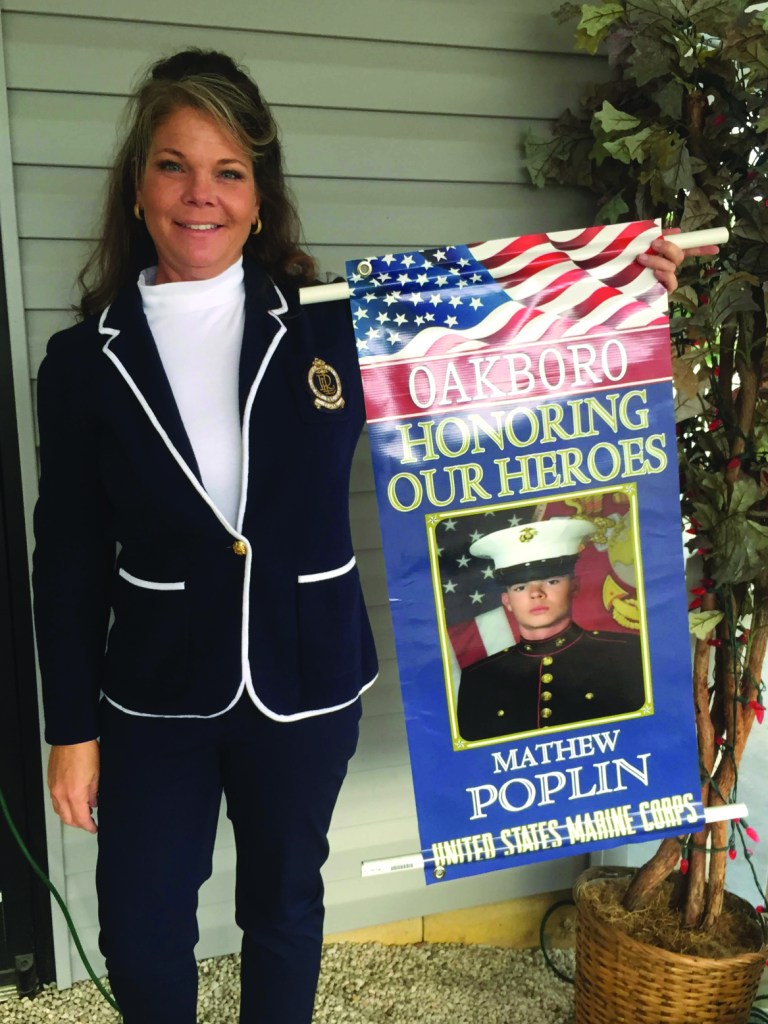 Photo by JESSE DEAL Oakboro resident Rene Poplin displays a banner featuring her son, Matthew, who is a Marine stationed at Camp Lejeune. Poplin began a project in Oakboro to honor active duty, veteran or fallen members of the Armed Forces.

As of Veterans Day, the application process of the first military tribute banner program in North Carolina’s history is underway in Oakboro.

For a $100 fee made to Locust’s VFW Post 6365, Oakboro residents can apply to recognize an active, veteran or fallen U.S. Armed Forces member with a banner on Main Street.

With the help of the Oakboro Fire Department, 25 double-sided vinyl banners created by a local vendor will be bracketed with pocket poles across the town. Each one will feature the name, photograph and branch of a local military member, while an American flag will reside on posts in between them.

“These banners are a tremendous way to show that we support and honor our current members and to remember those who have served,” said program coordinator and Oakboro resident Rene Poplin. “They highlight the incredible sacrifice of these men and women.”

The Oakboro Town Council unanimously approved the implementation of the program Sept. 17, allowing the 36- x 17-inch banners to be installed in May and hung through September.

“The program is going to be first-come, first-serve, and I want to allow people who didn’t get in this year to get the opportunity to do it for the next year,” Poplin said.

She has a 21-year-old son, Matthew, who is a Marine currently stationed at Camp Lejeune in Jacksonville. She also has a grandfather, father and uncle who served in the military.

Her tentative plan is to bring the banners down in September and to present them to the honorees and their families in a ceremony corresponding with Oakboro’s annual Veterans Day Parade.

Poplin says she first had the idea for the program this August when she was visiting family in Irvine, California.

“We were driving down Culver Drive and I looked up and said, ‘What the heck is that?’ Each time I would go out, I was seeing these banners and when I came home, I started researching,” she said.

When she realized the banners were part of a tribute program, she sought out the plans to do something similar back home.

The program’s application and informational website can be accessed through https://sites.google/site/oakboromilitarybannerprogram/ .

The applications – with a deadline of March 31, 2019 – are limited to the honoring of military members that call Oakboro their hometown or have immediate family residing in Oakboro.

Poplin hopes the inaugural launch of the banners will lead to a larger-scale effort going forward, in Oakboro and also in surrounding areas. If the program is successful, she plans to talk with members of the fire department about the possibility of increasing it beyond 25 banners next year.

“I’m proud of being able to do this, but it’s not about me,” Poplin said. “It’s about the men and women who are serving.”