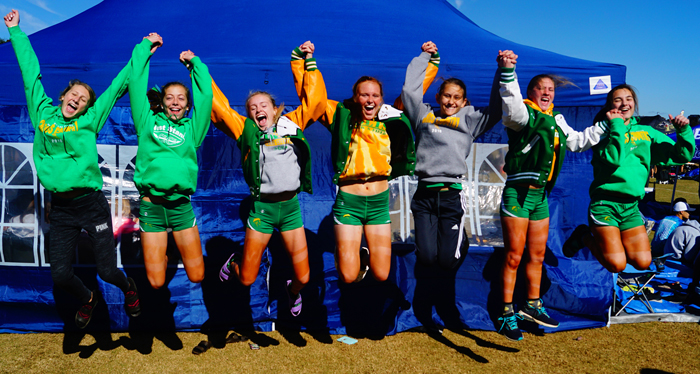 Amid both cheers and tears the 2018 West Stanly Colts cross country season came to an end Saturday at the NCHSAA 2A state championships.

While the Colt runners, families and supporters celebrated a 10th place finish on the Ivey Redmon course, their senior runners and families realized the meet closed out a memorable four years of their life.

The Colt women started the race ranked 10th in the state and that is how they finished. On a cool and windy day, the Colts lined up with the best 2A teams across the state. The top ranked team from Carrboro set a blistering pace from the start and most of the runners found themselves going out too fast.

The West Stanly runners were no exception as the top seven Colt women tried to maintain contact with the pack. Senior Pierson McManus handled the fast start the best of the Colts top women runners. McManus finished her cross-country career the way she hoped with a personal-record run. McManus ran 20:39 to finish as the 28th best 2A runner in the state.

The senior stands No. 3 on the Colts all-time list, only seven seconds from the second spot. 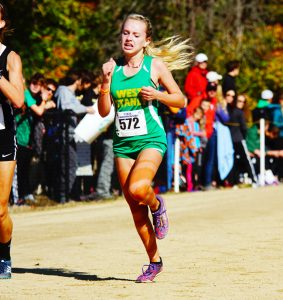 Pierson McManus was the top finisher for West Stanly running a 20:39 at the 2A state meet. (Photo by Johnny McManus)

McManus will have one last chance to move up the list as she will join hundreds of other runners at the Footlocker Regional meet the Saturday after Thanksgiving, running unattached all hoping to improve their times. While McManus will now transition into indoor track, she will also start the recruitment trail with an official visit to UNCW in two weeks.

Colt teammate Natalie Almond also handled the quick start well. The freshman closed out her first season of cross-country just two seconds off her personal-record, running 21:03 to finish in 36th place. The time was her best on the Kernersville course and she stands fifth on the Colts all-time list.

Seniors Maddie Miller and Brooklyn Simpson showed their toughness after the fast-early pace took its toll on both Colts. The pair used their experience to recover in the middle of the race and still finish strong. Miller closed her career running 22:42 in 88th, while Simpson ran 23:00 for 98th. Both are in the top 10 on the Colts all-time list, with both being recruited to run in college.  Simpson just completed a visit to Wingate, with Miller heading for a visit to Lenoir Rhyne in the next week.

Freshman Laney McCollum fared better than most with the quick start, running a 23:19 — her second fastest time of the season and her best time on the course.

Junior Katherine Pollard dropped her regional time by a minute running 24:02, with sophomore Rachel Efird close behind at 24:05.

All seven Colts now head to indoor track as the Rocky River Conference has made it an official conference sport for the first time.