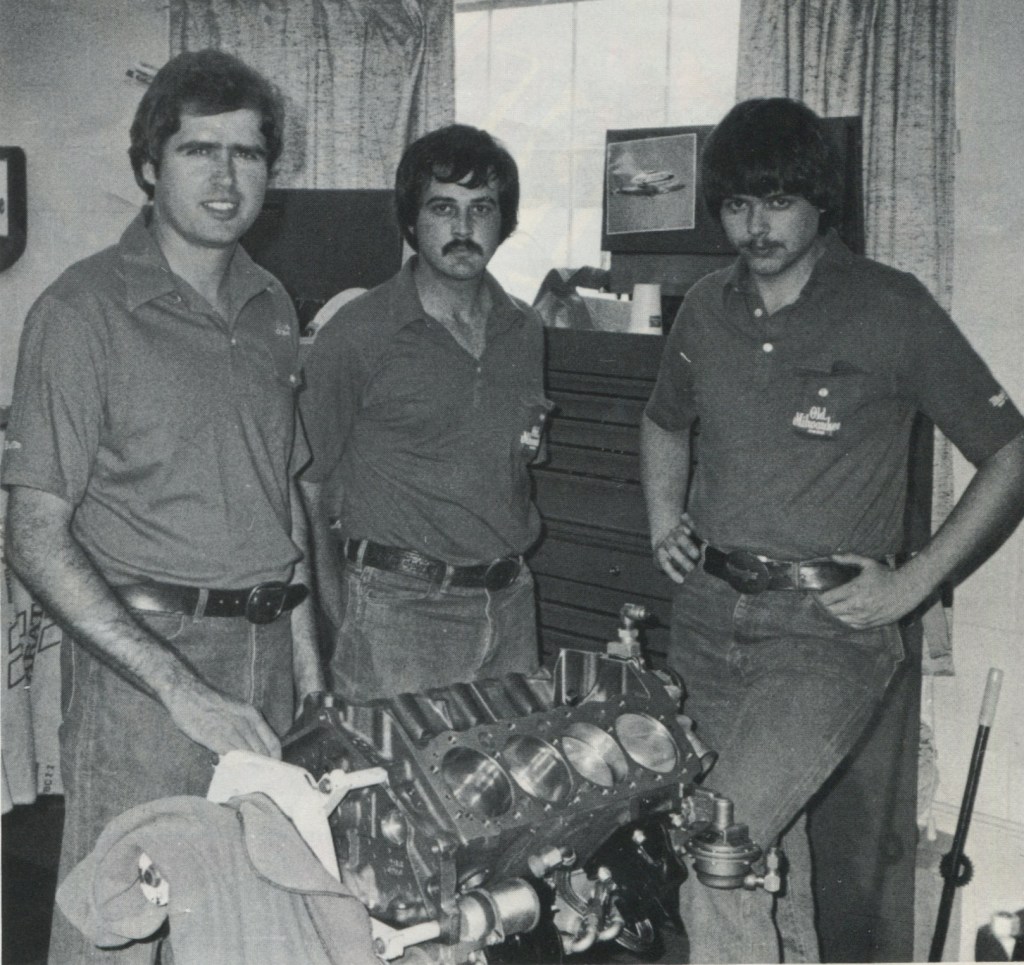 Brothers Herman, Keith and Earl stand alongside a racing engine during the early 80s. The Millingport brothers built engines for some of NASCAR's heavyweights, including working on teams for Bobby Allison and the late greats Dale Earnhardt, David Pearson, and Benny Parsons, just to name a few. The Almonds had a renowned reputation in racing circles, especially specialty engines.

By Sunday afternoon NASCAR fans will learn this year’s championship driver. What many local racing fans don’t know, however, is that three brothers with local ties share a history in the sport.

Only few know that Millingport natives Herman, Keith and Earl Almond once transferred their farming acumen into engine knowhow for some of racing’s most recognizable stars and the sport’s most coveted prize.

“While living on a farm you have to be able to fix everything,” Earl said. “You have to use your imagination a lot because things are always breaking down.”

Not only were the Almonds a part of NASCAR, but they were there when the sport began its meteoritical rise from a Southern phenomenon to a national sensation. Along the way, they worked alongside such racing greats as Dale Earnhardt, David Pearson, Bobby Allison and Tim Richmond, just to name a few.

Many of the drivers and racing personalities of their time have since perished.

Moreover, throughout their careers the Almonds were part of iconic developments in the sport of racing.

Now at 68 years old, Herman is the oldest Almond brother, 6 years older than Keith and 8 over Earl.

Herman first stepped into NASCAR lore, working for Hollman Moody in the 1970s before joining L.G. DeWitt’s race team in Ellerbe with driver Benny Parsons. He was part of Parson’s championship season in 1973.

“Herman taught me the business when I was right out of high school,” Earl said.

After the stint with DeWitt, Herman and Earl joined Rod Osterlund Racing, which fielded cars for the rookie class of Dale Earnhardt, Harry Gant and Terry Labonte.

In 1980, Herman and Earl were part of Earnhardt’s first NASCAR championship.

Along with building engines for Earnhardt’s championship season, they built the first small block Chevrolet that started third on the grid at the Indianapolis 500.

While working for Osterlund, they built engines for Marty Robbins, a country music singer who used his musical career to fund an avocation of racing, and Janet Guthrie, the first woman to break the all-male drivers club in NASCAR.

They also built engines for Formula One legend Dan Gurney, who later transitioned into NASCAR.

“Back in those days only a few guys knew the secret to make a car go fast and we kept that to ourselves,” Earl said. “It wasn’t cheating; they just didn’t have a rule for it.”

It wasn’t until the end of the 1980 season that the three brothers united for the same team. They went to work for Joel A. Halpern, a wealthy real estate developer who formed a race team more as hobby than a business. Instead of race cars, Halpern raced offshore powerboats.

The Almonds built engines for Halpern’s team with Pearson then as the driver.

Shortly after starting the team, Halpern was killed in a race in New Orleans.

Since his family did not share his hobby for NASCAR, they shuttered the team.

Next, they landed with Billy Hagen’s team. There they built a motor that finished runner-up in the 24 Hours of Le Mans France in ‘82.

Hagen sold his team, including the services of Earl and Herman, to Raymond Beadle of Blue Max Racing, which fielded a car for Richmond.

For the Almond brothers, like many in racing, Dale Earnhardt served as the sport’s bellwether more than any other driver.

“Earnhardt was just a regular guy to his co-workers,” Earl said. “When Dale got killed, that was hard on us.”

At one time Earnhardt allowed the Almonds to use his shop and tools at his mother’s home in Kannapolis.

One of the Almonds more celebrated experiences came when they worked for Stavola Brothers Racing, which included Bobby Allison, one of racing’s popular patriarchs and who won the series championship in ‘83. Joining the trio with the team was their cousin Jeff Almond, who built gears and transmissions.

In 1987, an Allison crash at speedy Talladega birthed one of NASCAR’s first major changes in the interest of safety.

Earl kept Allison’s blown tire that caused the crash as well as the first restrictor plate used thereafter as souvenirs.

A year after the crash, an Almond engine started the season with the team winning the Daytona 500. Allison’s champagne-colored Miller Beer sponsored Buick took the checkered flag ahead of son Davey Allison in one of NASCAR’s more memorable finishes. 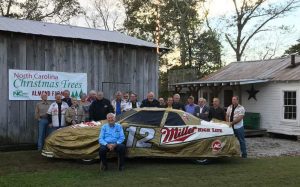 Last month at Almond Farms in Millingport, the Stavola Brothers Racing team celebrated its 30-year reunion of winning the 1988 Daytona 500 when team driver Bobby Allison edged his son Davey for the victory. That same year, Bobby Allison, seated in front of the race car, was nearly killed in a crash at Pocono Raceway. The crash ended his driving career.

Last month, the team held a 30-year reunion at Earl Almond’s farm off Biles Road in Stanly County to celebrate the victory in Daytona.

Even Bobby Allison, 80, attended to honor his teammates who shared a unique bond unlike teams today.

“They all knew each other pretty well. That all worked together before I came to Stavola Racing,” Bobby Allison said of the group.

It was a bittersweet year for Bobby Allison. After edging Davey at Daytona, the elder Allison suffered a near fatal but career-ending crash weeks later at Pocono Raceway.

In addition to broken bones, Allison suffered a brain injury, which required drilling a hole into his skull to relieve bleeding.

Allison said he came within 90 seconds of dying from his injuries if not for an astute doctor.

By then Herman had left racing and went to work for Phillip Morris. Meanwhile, Earl and Keith joined Allison’s new team.

Because the Almonds were so well respected in racing, job opportunities were always close at hand. Add tenuous finances and sponsorships among race teams and the journey could be nomadic.

After Allison’s team, Earl bounced between teams before he, too, called it quits.

Both Herman and Earl drifted away from racing.

Earnhardt’s fatal crash in 2001 not only changed racing in the eyes of fans, but left voids for others in the garage.

“After Dale was killed I didn’t care to watch racing anymore,” Earl said.

Eventually Herman and Earl returned to farming. While Herman is mostly retired, Earl has transformed the Almond homeplace into a Christmas tree and blackberry farm.

Earl is as meticulous with the farm’s operation as he was with creating horsepower.

He’s also in the process of turning a hobby of cooking into a business, or Big E’s Smokehouse BBQ.

“When I retire, I’m going into the catering business,” Earl said.

Meanwhile, Keith chose to ride out a career in racing. He presently works with Richard Childress Racing.

“It’s all I know except farming,” Keith said. “I decided against farming when I was 12 years old. Nothing against farmers, God bless them, but it just wasn’t for me.”

Long days and the laborous nature of farming seemed too demanding for the middle brother.

Instead, Keith stayed with racing. Over an 18-year span, he only missed traveling to six races. Back then team members drove to all the tracks east of the Mississippi River.

“We were home just long enough to put on a fresh shirt and wash your face,” Keith recalled.

In one year, Keith said he spent 220 nights away from home in a motel. His current position, however, doesn’t require as much travel.

Opinions differ on state of sport

Interestingly, the brothers have different opinions about the state of NASCAR.  Having been away from the sport for a number of years, Earl and Herman tend to share the same views about the waning appeal of the sport.

Gone is the relationship between racing’s personalities and fans, they contend.

“People don’t have anybody to identify with anymore,” Earl said.

Racing’s rebellious culture became whitewashed to make it more commercially palatable and corporate friendly, they say. As a result, racing lost its individuality, thus its original fan base.

“There was a time when everybody knew everybody,” Herman added. “Now, there’s an army of people with each car.”

Back in the day, race teams used to be small groups. Although they competed on the track, there was also a sense of family between teams.

“If someone was struggling you helped them out,” Earl said of loaning a team an engine, tires, even a crew member in a pinch.

Keith disagrees with his brothers’ assessment that personalities are no longer accessible to fans. In fact, he argues just the opposite is true.

Differences in today’s racing relates more to the technical side of the sport, Keith said.

However, he acknowledges millennials simply don’t appreciate racing the same way as fans of yesteryear.

“This generation doesn’t care about an automobile,” Keith said. “To them, a car is just about getting from point A to point B.”